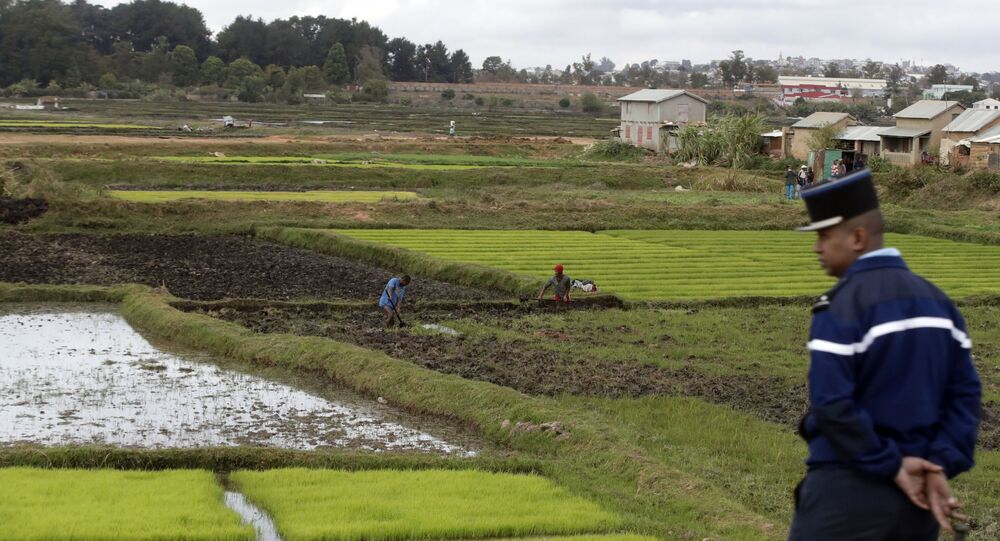 Madagascar: Why Giant Island Run by Former DJ May Have a Future as French Data Processing Hub

Madagascar is the world’s fourth largest island and, if laid across Europe, would span from London to Algiers. John Gimlette has just written a book about the island after spending three months travelling around it.

British author John Gimlette says he is optimistic about the future of Madagascar despite seeing appalling poverty among the island’s 26 million people.

Mr Gimlette, who has just published a book - Gardens of Mars: Madagascar, an Island Story, says many of the two million people in the capital, Antananarivo, live on less than a euro a day.

"The Malagasy have got a real problem with corruption but they are very ingenious and good at coming up with solutions, especially in their approach to technology. They have the best 4G in the whole of Africa," he says.

© Photo : John Gimlette
A boy from the Sakalava people of western Madagascar

Mr Gimlette says they are fast becoming a data processing hub for the French-speaking world and that industry will soon employ 50,000 people.

He adds they are also carving a niche out for Francophone customer service centres and he says this was partly because they are naturally “sympathetic”.

Mr Gimlette explains Madagascar suffered from a considerable “brain drain” with professionals, especially doctors, going off to work in France and he says rich Malagasy also often moved to Mauritius or the Seychelles, leaving behind only the poor.

© Photo : John Gimlette
A man rows a canoe on the River Tsiribinha in western Madagascar

Madagascar is one of the most mysterious and enigmatic countries in the world.

Most people in the western world know nothing about it and would have trouble placing it on the map or coming up with an accurate fact about the island.

Millions of years ago Madagascar was part of a giant landmass which broke away from the super-continent of Gondwanaland and floated out into what would become the Indian Ocean.

At the time Madagascar was connected to what would become India and Sri Lanka but they then broke off and floated northwards, with ‘India’ eventually crashing into the Asian continent, creating the Himalayas.

Mr Gimlette says there is a seam of sapphires in Madagascar which he is convinced is geologically linked to a similar field of precious stones in Sri Lanka.

Madagascar was an uninhabited island off the coast of what would become Africa and would remain so until 10,000 years ago when there is evidence of some human habitation, although it is not clear if it was settlers or people just passing by.

Then, around the time of Jesus Christ, the ancestors of the modern Malagasy people arrived - a group of migrants who had travelled 3,700 miles from Borneo in what is now Indonesia.

​The geographer Jared Diamond has described it as one of the “greatest mysteries of human migration” but there is an 80 percent congruity between the Malagasy language and that of the Barito valley in southern Borneo.

Fast forward until the 19th century and Madagascar was being coveted by the British and French, as it is close to the main shipping route from Europe to India.

"They translated the New Testament into Malagasy, published 3,000 bibles and within 10 years had converted half a million people," says Mr Gimlette.

The French would later convert many more to Catholicism.

Mr Gimlette, who has previously written books about Sri Lanka and Surinam, explains: “The French arrived in 1895 and one of the journeys I did was to retrace their steps from the coast to Antananarivo. It’s 500 kilometres and they were building a road as they went so it was a very slow march.”

Eventually they reached the capital and conquered it with minimal effort.

He says malaria and blackwater fever counted for most of their casualties.

Antananarivo, which had been founded by the island’s dominant Merina tribe in 1610, was now a sizeable city surrounded by slums and shantytowns.

The Merina, who hail from the highlands, remain the dominant political force in Madagascar today but they remain in conflict with Afro-Malagasy people from the coast, the so-called côtiers.

The current President, Andry Rajoelina, and his two predecessors Hery Rajaonarimampianina and Marc Ravalomanana, are all Merina.

Ravalomanana - a self-made milk and yoghurt millionaire - led the country from 2002 until 2009 when he finally stepped down and handed over to Rajoelina, a former DJ, after a political crisis which lasted for nine months.

Mr Gimlette says Ravalomanana had been an Anglophone, who was trying to move the country closer to the United States, and he says France and Russia were behind Rajoelina.

Rajoelina lost power in an election in 2013 but bounced back in 2018, defeating Ravalomanana.

Mr Gimlette says: "Rajoelina started out as a DJ and then ran a lot of radio stations which made him wealthy. He is very young. He was one of the youngest heads of state when he came to power. He is very dapper. He's an interesting guy."

© AP Photo / Alexander Joe
In this photo taken Friday, April 24, 2020 residents are given bottles of a herbal mixture which is said to prevent and cure COVID-19 in Antanarivo, Madagascar. President Andry Rajoelina is promoting the drink but there is no scientific proof to back up his claims.

In the summer of 2020, when COVID-19 hit Madagascar, Rajoelina endorsed a traditional Malagasy cure, made from local plants. It sold widely across Africa but has no credibility among the medical establishments of the western world.

There have been 267 deaths in Madagascar, compared to 20,000 in Belgium - a country with a population of half the size.

Mr Gimlette stresses it was “chaotic for a time” and is “still there” but he notes Madagascar had a history of knowing how to lock down, which may have helped it, as has its isolation.