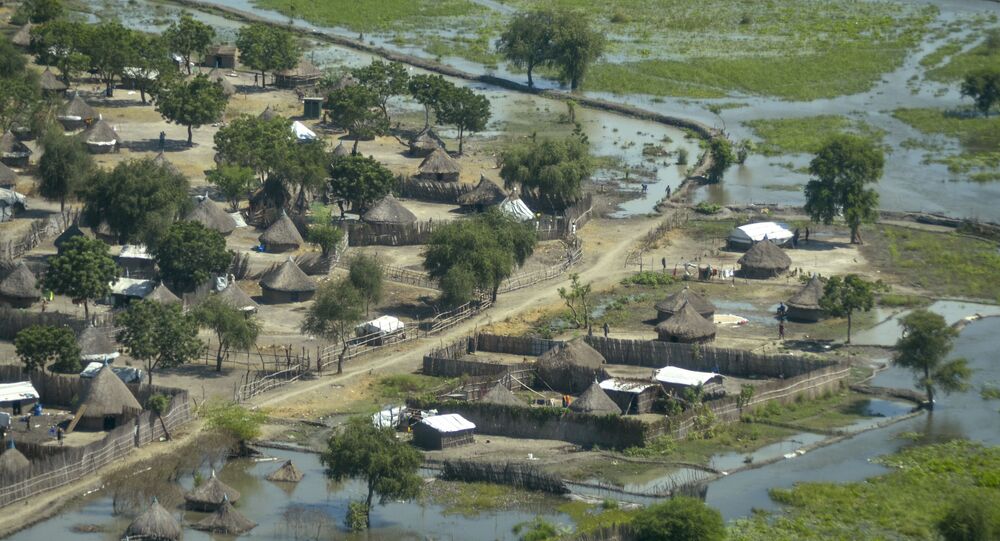 South Sudan gained its independence from Sudan in 2011. Since 2013, it has been engulfed in an armed conflict over control between two rival ethnic groups, the Dinka and the Nuer, leading to the killing of thousands and the displacement of millions. Ongoing floods are yet another story of the northeast African nation’s struggle.

The worst floods in South Sudan’s history have led to the displacement of about a million people, as roads and crops have been drowned, livestock killed and starvation threatens the country's population. The spread of disease among the young nation has increasingly become a threat as well, according to a report by the Associated Press.

With pictures, the news organisation documents the suffering of the South Sudanese population in the Old Fangak area in the hard-hit Jonglei state, where Nyaduoth Kun, a mother of five, said that the floods destroyed her family's crops and turned their life into a months-long struggle, as people sell their valuable livestock to buy food that is never enough.

“The family eats just two meals a day and the adults often go to bed on empty stomachs,” Kun told the outlet, adding that she has begun collecting water lilies and wild fruit to feed her children.

More than 60 villages have been affected by the flooding, which started in June 2020, as, according to reports, the South Sudanese government has not paid enough attention to the crisis, “failing” the people in affected areas.

“We don’t have hope, we lost confidence in them,” Kueth Gach Monydhot, the government’s acting deputy director in the area said. “Do you think they will plan for other people when they have failed to implement the peace agreement?”

Nyaduoth Kun has argued that the population in her area knows very little about the ongoing COVID-19 pandemic, which has so far infected over 83.6 million people globally and killed at least 1.82 million.

“There are many diseases living among us, so we can’t figure out if it’s coronavirus or not,” she said.

© AP Photo / Maura Ajak
Thatched huts surrounded by floodwaters are seen from the air in Old Fangak county, Jonglei state, South Sudan Friday, Nov. 27, 2020. Some 1 million people in the country have been displaced or isolated for months by the worst flooding in memory, with the intense rainy season a sign of climate change.

Another woman, Nyankun Dhoal, who gave birth to her seventh child a few weeks ago during the floods, said that she and her baby are facing medical issues.

“I feel very tired and my body feels really weak,” Dhoal stated, adding that one of her breasts was swollen, and her newborn had rashes.

Regina Nyakol Piny, a mother of nine, who now lives in a primary school in the village of Wangchot after being displaced due to the floods, told AP that her only hope is that peace will return to the country so that people can enjoy basic services, adding, “That will be even enough for us”.

“We don’t have food here, we rely only on UN humanitarian agencies or by collecting firewood and selling it,” said Piny. “My children get sick because of the floodwaters, and there is no medical service in this place.”

James Diang, the chief of the Wangchot village, said they have started to send very ill children to the dry town center after several drowned at the beginning of the flooding “and everything was being destroyed rapidly”.

As the situation has worsened and diseases become more widespread, the town has begun to transport survivors to drier areas by canoe, adding that sometimes “our children die in our hands because we are helpless.”

South Sudan, which gained independence from Sudan in 2011, has been engulfed in an armed conflict power struggle between two rival ethnic groups, the Dinka and the Nuer, since 2013. Thousands of people have been killed in the ongoing violence, while millions of others have left their homes.

In February 2020, President Kiir and opposition leader Machar signed a power-sharing peace deal that included an immediate truce and the formation of a transitional government ahead of the drafting of a new constitution and new elections.