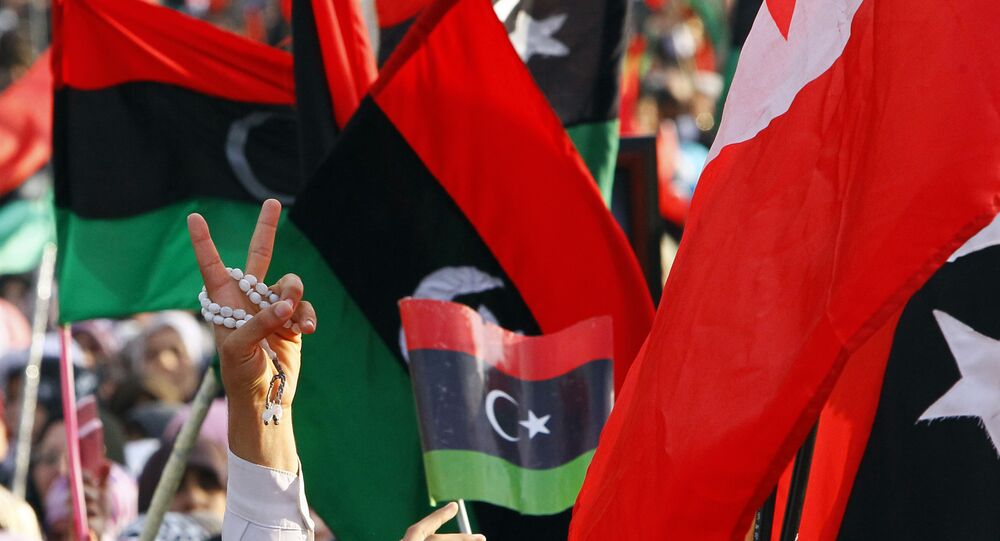 The 2011 Libyan uprising that toppled the country’s longtime ruler Muammar al-Gaddafi devastated the oil-rich nation, believes a Tunisian journalist, who has been covering the conflict extensively. And now a decade down the line, the future still looks bleak as the threat of the country's split is looming.

In December 2010, when Khaoula Ben Kias, a young Tunisian journalist was covering the eruption of the mass protests in her country that later turned into a tsunami known as the Arab Spring, she could not imagine that the wave of violent clashes would soon spill into Libya.

"The situation in Tunisia has been turbulent and unclear. There was accumulated frustration, the streets didn't calm down, and the masses wanted to change the reality," she relays, recalling the events that paved the way for the ouster of the longtime Tunisian president Zine El Abidine Ben Ali, who fled the country in mid-January, leaving with his family for Saudi Arabia.

But in the neighbouring Libya, the situation was different. Before the eruption of the NATO airpower-backed revolution in February 2011, the oil rich country had relatively high living standards.

Colonel Muammar al-Gaddafi, who ruled the country for 41 years, used Libya's oil to advance the society. Throughout his tenure, he launched ambitious social programmes in the fields of education, health, housing, public works and provided subsidies for electricity and basic products, something that improved Libyans' living conditions and positioned the country as having among the highest living standards in Africa.

Back then, Libyans' literacy rate stood at more than 88 percent, the concept of gender equality was protected by law, the country had no external debt, and the security situation was relatively stable, primarily due to the fact that Gaddafi was ruling the country with an iron fist.

This was the reason why Ben Kias believed Libya, with its prosperity and stability, would avoid that fate of mass protests.

"Many of us [journalists] didn't think that Libya needed that revolution. Of course, [just like others] they didn't have the freedoms and the democracy but they were a wealthy country that didn't require that upheaval," she says.

However, the Libyan masses thought otherwise. In mid-February 2011, protests erupted in the city of Benghazi as people were angered by the arrest of a human rights lawyer, Fethi Tarbel.

Demonstrators called on Gaddafi to resign but he vowed to stay with his loyalists until the end, leading to violent clashes between protesters and the security forces.

© Sputnik
Libya: Before and After Gaddafi
When Benghazi finally fell into the hands of the rebels and the upheaval reached Tripoli, Gaddafi resorted to lethal force against the demonstrators.

The situation rapidly spiralled out of control, with protests escalating and eventually leading to the eruption of an armed conflict between government forces and rebels, backed by NATO.

Top officials voiced their support for the revolution, with some military personnel leaving Gaddafi to join the rebel forces, and the feeling was that the longtime ruler was losing the country.

Khalsah Square in #Benghazi before and after Dignity Operation war pic.twitter.com/EKJY2GO2Pf

​Gaddafi blamed foreign powers for the turmoil in Libya as NATO initiated one of its “humanitarian interventions” there, conducting airstrikes against government forces.

In 2016, a report submitted to the subcommittee on Terrorism, Nonproliferation, and Trade pinned the blame for the mess in the country on Washington, saying it was the administration of Democrat President Barack Obama that established a no-fly zone over Libya, something that helped "Islamic terrorist groups long subdued under Gaddafi's regime to spring up."

Although Ben Kias doesn't use similar terms, she does acknowledge that the general feeling was that the Libyan revolution was not born inside the country but was rather carried there by "the winds of the Tunisian revolution".

The capture, brutal torture and murder of Gaddafi by the rebels after a NATO air strike hit his convoy outside his hometown of Sirte in October 2011 unleashed chaos in the war-torn country.

According to the same 2016 report, the death of Libya’s longtime strongman resurrected "long-simmering political, regional and ethnic divisions" and allowed terrorist organisations to rear their heads.

On the political front, the civil war that erupted led to the division of the country. Economically the revolution caused the destruction of part of the country's infrastructure and almost halted oil production, dealing a devastating blow to industry, given that the sector has been a major source of income for Libyans.

And now almost ten years down the line, Ben Kias says the future of the North African country, which has ever since been divided between several armed factions, still looks bleak.

"I think that eventually Libya will fall apart and will be divided between the East, the West and the South. Peace is remote there not only because of the external interference but also because of the absence of educated elite and the lack of national figures, who would be able to steer the country through this crisis."