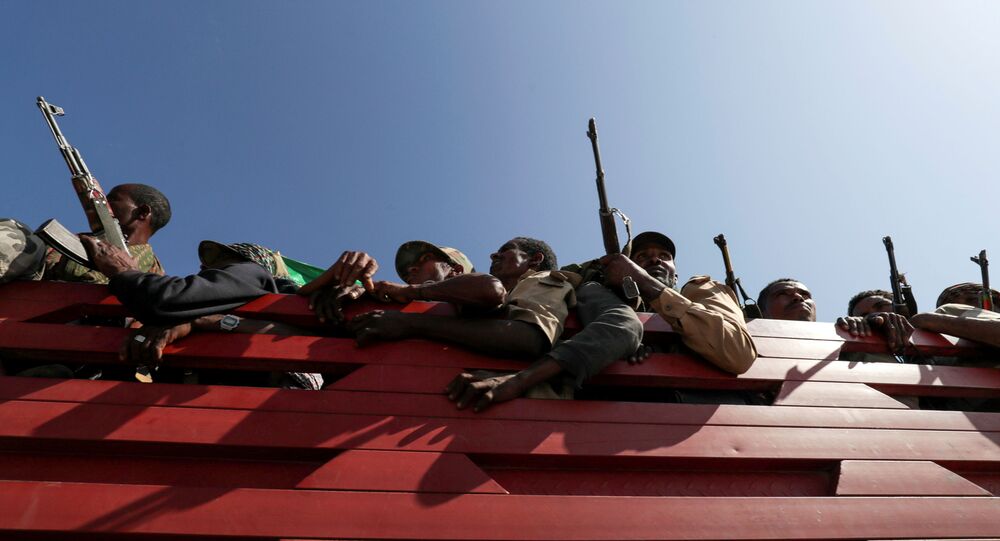 Earlier Reuters reported that two explosions had hit the Ethiopian cities of Bahir Dar and Gondar in the northern state of Amhara amid the escalation of tensions in the nearby state of Tigray.

Rockets were fired at the direction of Bahir Dar and Gondar in Ethiopia's Amhara state, which neighbours the Tigray region where the national defence force is fighting local troops, late on Friday, according to the government's emergency task force.

The statement added that the attack had caused damage to an airport at Gondar, while another rocket aimed at the Bahir Dar airport missed the target. There's no information about casualties so far.

The Ethiopian government has accused Tigray forces of behing behind the rocket attack.

In the late hours of Nov. 13, 2020, a rocket was fired towards Bahir Dar & Gondar cities. As a result, the airport areas have sustained damages. The TPLF junta is utilising the last of the weaponry within its arsenals. Details of the incident is currently under investigation.

Spokesperson for the TPLF Getachew Reda has warned that "as long as the attacks on the people of Tigray do not stop, the attacks will intensify".

What is Happening in Ethiopia?

Last week, Ethiopia's central government accused the Tigray People's Liberation Front, the ruling party in the northern Tigray region, of attacking a local military base, a claim the party denies.

The Ethiopian armed forces later launched an operation in the defiant region. Prime Minister Abiy Ahmed's office announced a state of emergency in Tigray for a period of six months in light of "illegal and violent activities [that are] endangering the constitution and constitutional order" and the impossibility of control and prevention via regular law enforcement mechanisms.

According to the prime minister's office, the TPLF have sought weapons to arm paramilitary troops in the region "in the past few weeks." The prime minister's office also accused the party of provocations and incitement to violence "over the past months," such as dressing their forces in military uniforms resembling those of neighboring Eritrea in a bid to conduct false flag interventions.

Abiy Ahmed also claimed that that fighters backing TPLF went on a rampage after federal troops had "liberated" the western part of Tigray, "brutally" killing innocent civilians in Mai-Kadra, a town in the South West Zone of Tigray.

© AP Photo
Civil War Fears as Ethiopia Starts Military Operation in Opposition-Controlled Region
On Friday, UN High Commissioner for Human Rights Michelle Bachelet warned that the conflict in the northern Ethiopian region of Tigray, with reported mass killings and the region's suspected blockade, risks getting out of control and spilling across the border.

Citing a report by Amnesty International in which the watchdog claimed mass killings in Mai-Kadra, the UN human rights chief called for a full inquiry and said that if verified, these killings would "of course amount to war crimes".

"However, the first priority right now must be to stop the fighting and prevent any further atrocities from taking place", she added.

Since the overthrow of Ethiopian President Mengistu Haile Mariam in 1991 and until 2018, the TPLF was the main partner in the governing coalition, and ran Tigray. But after Prime Minister Abiy Ahmed came to power in 2018, he curbed the TPLF's influence. The party has, however, refused to disband and merge with the other three parties to form the Prosperity Party, as advocated by Abiy Ahmed.

The TPLF has since been in opposition to the incumbent government. In September, it asked the cabinet to hold local elections, which were earlier postponed over COVID-19. After getting a rejection, the party organised elections on its own which the central government never recognised as legitimate.