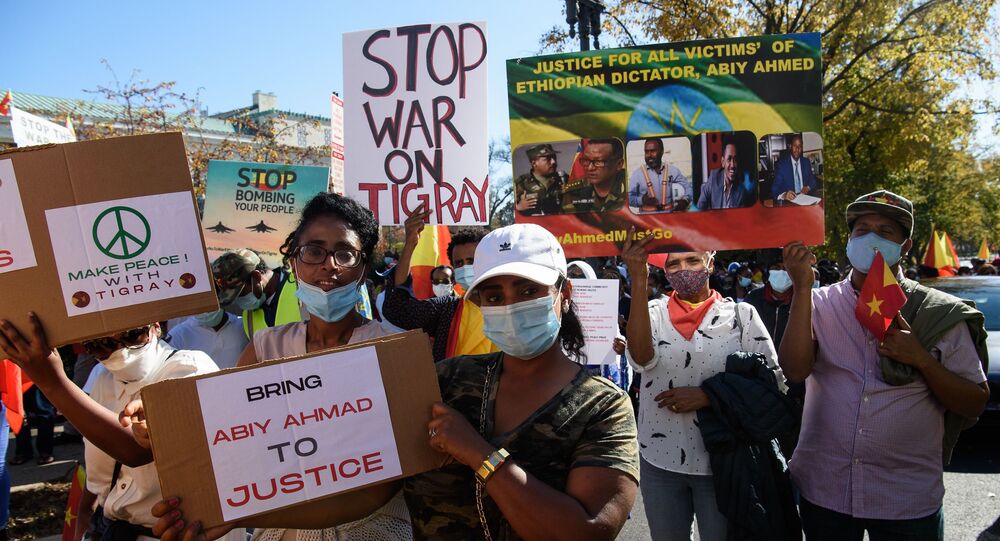 The African Union has called for an immediate halt to the conflict in northern Ethiopia, where the army is clashing with forces from the Tigrayan regional government.

Moussa Faki Mahamat, chairman of the African Union Commission, said in a statement on Tuesday, 10 November: "The chairperson appeals for the immediate cessation of hostilities and calls on parties to respect human rights and ensure the protection of civilians.”

1/3:I’m following with concern the escalation of military confrontation in #Ethiopia &wish to reaffirm the AU’s firm attachment to the constitutional order, territorial integrity, unity & national sovereignty of the FDR of Ethiopia to ensure stability in the country&in the Region

​Abiy Ahmed, who won the Nobel Peace Prize last year for reaching a deal with neighbouring Eritrea over the Badme triangle border dispute, has described the TPLF-controlled regional government in the Tigrayan capital, Mekelle, as a “criminal junta.”

Negasi Tesfaye, a political observer in Addis Ababa, said he feared the conflict could increase the number of refugees heading from Ethiopia and Eritrea north, through Sudan and Libya, into Europe.

He said: “Tigray’s economy had been thrown into disarray with the siege. Fuel supply is short, communications cut off, food is in limited supply and prices are skyrocketing. Add to that the COVID pandemic and the locust swarms and it’s a catastrophe.”

TODAY, I saw the ugly side of war with my own eyes. @Alamata town where I got stranded has been the target of aerial bombardment by @AbiyAhmedAli fighter jets. I saw a cloud of dust covering the sky as the jet kept hitting its target. Stop the war please 🙏. We still got time.

​Mr Tesfaye said: “Tigray is already a food insecure region and this war will exacerbate the humanitarian situation.”

He said Tigray was already home to thousands of Eritrean refugees, who had fled military conscription under the authoritarian regime of Isaias Afewerki.

Those refugees may now flee Tigray and head north, towards Europe.

This is a map of Tigray region, showing the Badme triangle and other disputed areas. #Tigrayans claim Eritrean troops have crossed the border in Humera in the west. But their bigger problem is with Ethiopian troops and Amhara militiamen.
Map courtesy of @daniel_passport pic.twitter.com/inDIXPqlQz

​Sudan’s SUNA news agency reported on Tuesday that “large numbers” of refugees fleeing the fighting in Tigray had crossed the border into Sudan.

​The leader of the Tigray region, Debretsion Gebremichael, claimed on Tuesday that Eritrean troops had crossed the border in Humera in western Tigray.

Mr Gebremichael said: "Since yesterday, the army of Isaias (Afwerki) have crossed the country's boundary and invaded. They were attacking via Humera using heavy arms."

​Mr Tesfaye said Ethiopia was now in danger of “Balkanising” and there were early echoes of the conflict in Yugoslavia in the 1990s.

But most of the fighting was done by the TPLF, which was led by Meles Zenawi, who became Ethiopia’s President in 1991.

Mr Tesfaye said: "Tigray and Amhara have historically fought for the imperial crown (of Abyssinia) for centuries. Both sides don’t trust each other to rule the country. It is a zero sum game that has impoverished Ethiopia for a century."

​The Oromo, who make up a third of the country’s population of 114 million, are now sitting on the sidelines watching the conflict between Abiy’s Amhara-dominated government and the Tigrayans.

Mr Tesfaye said: "The Tigray regional forces are fighting alone for their survival, however there are many Oromos who are sympathetic because they’ve been targeted by Abiy’s military too, especially in Wellega in western Ethiopia."

"There is a risk that Ethiopia can Balkanise. Tigrayans and Oromos want ethnic federalism, with autonomy for their regions. The Amhara, with support from Abiy Ahmed, want to change the constitution to a non-ethnic based system where power is concentrated in the centre (Addis Ababa)," Mr Tesfaye added.

​He said the current conflict was “fundamentally an ideological battle, tinged with a bit of historical rivalries.”

With the United States embroiled in the aftermath of its presidential elections and Russia focusing on the Nagorno-Karabakh conflict, it may be left to China - which is Ethiopia’s biggest trade partner - to exert the diplomatic pressure needed to stop the fighting.