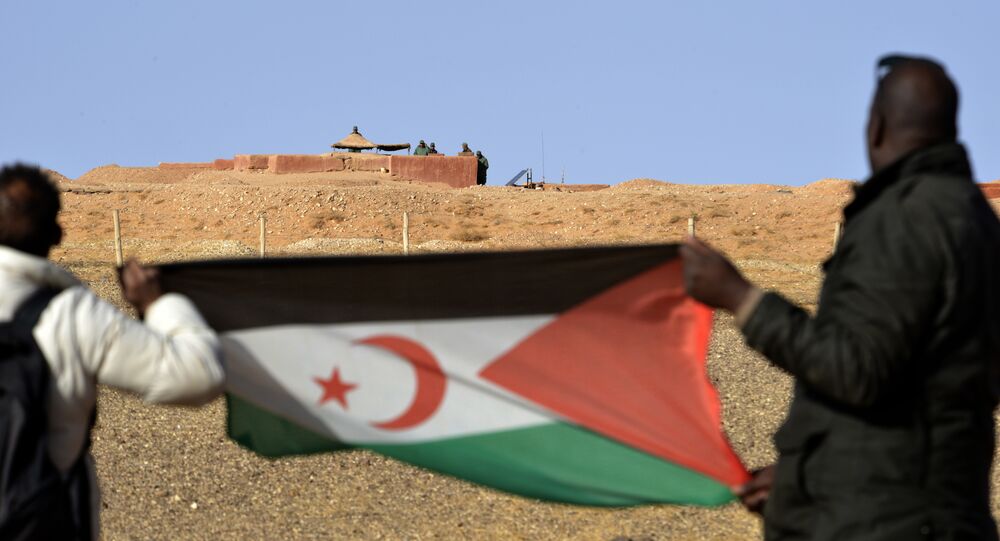 Saharawi demonstrators have shut down a border crossing with Mauritania in order to draw attention to their plight ahead of the United Nations’ renewal of its mission in Western Sahara. The activists demand the UN begin monitoring human rights in the country, which has been occupied by Morocco for 45 years.

For more than a week, protesters have shut down the El Guerguerat border crossing between Western Sahara and Mauritania in a bid to pressure the United Nations to increase its activities in the desert country. A six-month extension of the UN Mission for Western Sahara (MINURSO) is due to be voted on Wednesday, and activists and representatives of the Saharawi people have demanded its purview be extended to include human rights monitoring.

MINURSO was created in 1991 amid a ceasefire between Moroccan forces and the Popular Front for the Liberation of Saguia el-Hamra and Río de Oro (Polisario Front), which had waged a war of liberation ever since Morocco invaded and annexed Western Sahara in 1975 on the heels of the Spanish colonial government’s departure. The peace deal saw the construction of a massive, 1,700-mile-long sand berm separating the territory into parts controlled by Moroccan forces and by the Polisario Front, with MINURSO tasked with facilitating a referendum on independence that has never materialized.

The annexation got Morocco kicked out of the African Union for many years, but more recently, some African nations have come around to supporting Rabat’s position, though efforts to curry favor with world powers such as Russia have met with mixed results. Meanwhile, Morocco has retained control of Bou Craa, one of the world’s largest phosphate mines, in Western Sahara’s north.

Saharawi Voice, a collective of Saharawi citizen journalists, wrote on Twitter on Monday that “a mixture of frustration, anger and timing has led to the current situation.”

3/11 What’s happening? Saharawi people have gathered at Western Sahara's southern border with Mauritania and shut down a “crossing point” there. It was (mostly) used by Moroccan exporters trading goods with Mauritania, and to travel between the occupied territories and Mauritania pic.twitter.com/LtGotEbxLI

​“Saharawi people have grown exhausted after decades of false promises made by successive UN Chiefs, Personal Envoys, Security Council Resolutions, General Assembly Votes and the continued failure of the UN to gather enough pressure on Rabat to act,” they wrote. “MINURSO is one of the few UN Missions that doesn't even have a human rights monitoring mandate. Meaning that Morocco's brutal oppression of Saharawi people in the occupied territories is not even documented by the UN Mission for Western Sahara.”

“The little hope that MINURSO will eventually carry out a referendum for Saharawis to decide our fate, lies in the Personal Envoy of the Secretary General for Western Sahara (PESG),” the journalists wrote. “They bring the parties together and facilitate negotiations. They are key to the process.”

According to Moroccan online outlet Le360, Rabat has repeatedly asked MINURSO to end past obstructions at El Guerguerat, which has been a point of conflict for years. Brahim Ghali, president of the Saharawi Republic and secretary general of Polisario Front, stressed in an October 22 letter to UN Secretary General Antonio Gutteres that it is “utterly unacceptable to see MINURSO acting as a ‘traffic police’ in the south-western tip of the Territory, while the Mission itself has repeatedly failed to provide protection to Sahrawi civilians.”

London-based human rights nongovernmental organization Amnesty International has also thrown its weight behind the Saharawi demands, calling on October 22 for the UN to establish a “fully independent and impartial mechanism within the UN peacekeeping mission, with the mandate and resources to effectively monitor human rights abuses in both Western Sahara and the Tindouf camps,” the Saharawi refugee camps across the border in Algeria that are home to close to 100,000 refugees.

“Over the past 40 years of the territorial dispute, serious human rights violations and abuses have been repeatedly committed by both the Moroccan authorities and the Polisario Front. We are calling on the UN Security Council to strengthen the peacekeeping presence in the area by adding a human rights component to its mandate,” Amna Guellali, Amnesty International's deputy regional director for the Middle East and North Africa, said in the statement.

“After the last Personal Envoy, German former president Horst Köhler, resigned over ‘health reasons’ over a year ago the Secretary General has yet to appoint a new PESG. The message this sends is that Saharawis' fate and future are neither important nor a priority for the UN,” Saharawi Voice noted.

“In the coming days, MINURSO is about to be renewed at the Security Council, and there isn't even a Personal Envoy appointed. Morocco's human rights abuses continue on a daily [basis],” they added. “And Rabat's plundering of Saharawi natural resources is alive and well. This, and many other factors have led to Saharawi people being fed-up with the UN's continued failure, and to act where we can. Stopping one of the illegal routes used by Morocco to plunder our homeland is one of them. So here we are.”