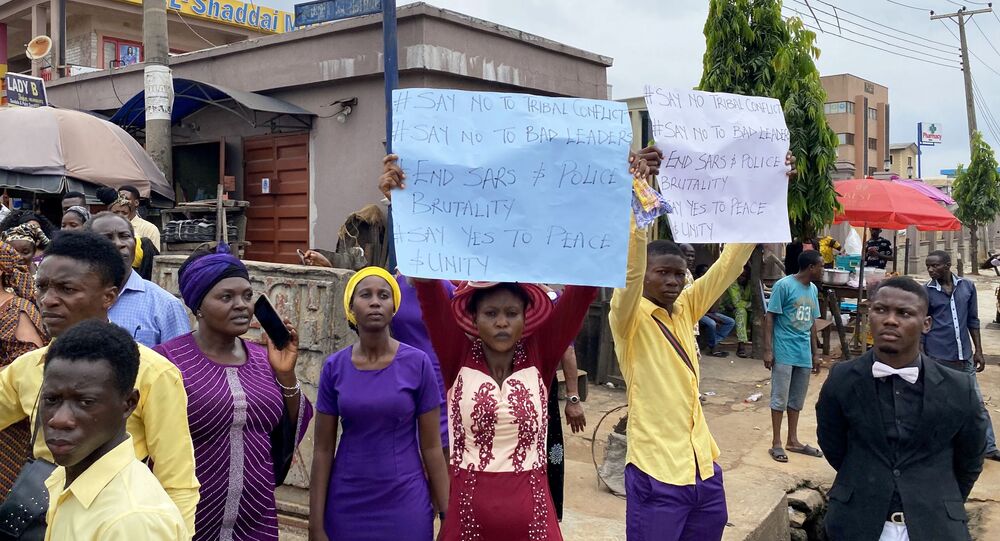 MOSCOW (Sputnik) - Nigerian President Muhammadu Buhari has expressed support to the authorities of southwestern Lagos State which had opened a judicial investigation into the looting and violence amid unrest following rallies against police brutality.

"The Judicial Panel of Inquiry set up by the Lagos State Govt has my full support, as it commences sitting this week. I‘m confident that all the State Panels will help ensure justice is done on behalf of the peaceful protesters and law enforcement agents who sadly lost their lives", Buhari wrote on Twitter.

Those arrested for a wave of violence and looting across the country after the incident in Lagos are due to stand trial on Monday.

© Sputnik
Demonstrators in London Stage Protest Against Police Brutality in Nigeria - Video
The government of Lagos State has announced they were probing 229 suspects accused of arson, vandalism, stealing, assault and other criminal offences after the security forces had opened fire on protesters in the city of Lagos last week, where a 24-hour curfew to curb criminal activities was imposed. The incident resulted in several fatalities and numerous injuries, drawing the condemnation of the international community.

The #EndSARS rallies across Nigeria ignited after numerous claims implicated the country's Special Anti-Robbery Squad (SARS) police unit in acts of killings, torture and blackmail. The department was disbanded by the authorities and replaced with the Special Weapons And Tactics (SWAT) squad. Nonetheless, the protests have continued against other forms of police violence.