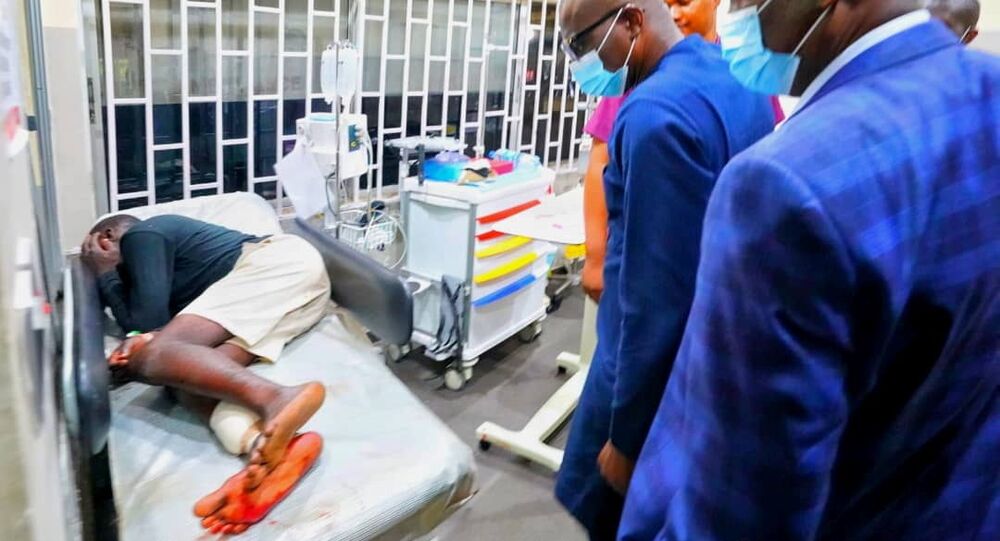 Death Toll Mystery After Protesters Shot in Lagos but What the Hell is Going On in Nigeria?

Lagos state governor Babajide Sanwo-Olu has said one person has died in hospital from "blunt force trauma" but there are unconfirmed reports of seven deaths after unidentified gunmen opened fire at the Lekki toll gate on Tuesday night. It follows weeks of protests against police brutality.

UN Secretary General Antonio Guterres has called for an end to police "brutality" after weeks of protests which culminated with demonstrators being shot by unidentified gunmen.

His spokesman, Stephane Dujarric said: "The Secretary-General urges the security forces to act at all times with maximum restraint while calling on protesters to demonstrate peacefully and to refrain from violence."

In sensitivity with the mood of the nation at this time, I have directed the following:

1. The immediate suspension of all State activities for 3-days except those connected with governance of security in the State and the management of the current issue.

​Manchester United star Odion Ighalo earlier tweeted he was "ashamed" of the Nigerian government after police or soldiers opened fire on protesters on Tuesday, 20 October.

More than three million people have viewed Ighalo's video - which he appeared to make after United’s game at Paris St Germain on Tuesday night - in which he said: "I'm not the sort of guy who talks about politics but I can’t keep quiet any more about what is going on back home in Nigeria."

​Ighalo said the government was a “shame to the world” for “firing on unarmed protesters” and “killing your own citizens”.

On Tuesday night video footage emerged of men in camouflage firing at around 1,000 protesters in the vicinity of the Lekki tollgate on Lagos Island, close to the British International School and the Oriental Hotel.

The governor of Lagos state, Babajide Sanwo-Olu, has ordered an investigation into the events at Lekki tollgate while the army has claimed its involvement is "fake news".

Mr Sanwo-Olu called for calm among protester and said the shooting was carried out by "forces beyond our direct control."

On Wednesday, 21 October, images were posted on social media of what is alleged to be army snipers posted on the roof of the Oriental Hotel as President Muhammadu Buhari called on Nigerians to be patient as his proposed police reforms "gather pace".

​The protesters were part of the #EndSars movement, which emerged earlier this month.

The demonstrators’ ire was aimed at the Special Anti-Robbery Squad (SARS), which has been accused of police brutality and has also been accused of engaging in corruption and extortion.

SARS was set up in 1984 by the Nigerian military, who had taken power in a coup d’etat the previous year.

THIS IS HARRISON FRIDAY , HE MADE A VIDEO BEGGING HIS FELLOW ARMY DEPLOYED TO LEKKI NOT TO SHOOT AT INNOCENT PROTESTERS.

​The coup was led by Major-General Muhammadu Buhari, a Muslim from the predominantly Islamic north of Nigeria, and the creation of SARS was part of his “war on indiscipline” campaign.

Buhari was overthrown in 1985 by another coup, led by General Ibrahim Babangida, but he was by no means finished.

Let me tell you something:
Yesterday night, soldiers were killing people and seizing their corpses. You know why? So they can deny any killings.

Dec 2015, they killed and buried 374 Shiites in Zaria. They’ve done this many times.

The Lekki Killings is a well rehearsed massacre.

Eventually he won - in 2015 - and became President of Nigeria.

Buhari, now 77, was re-elected last year as head of the All Progressives Congress (APC) government. Although he drew most of his support from the Muslim North, his running mate was Yemi Osinbajo, the leader of a Lagos-based pentecostal megachurch.

5am and we're still getting calls from people from Lekki. All through the night. Some hiding near there, some hurt, some just completely panicked

​The #EndSars campaign began on Twitter in 2017 but it really took off earlier this year after Amnesty International published a report which suggested that between January 2017 and May 2020 there had been 82 torture cases or extra-judicial killings.

On 3 October a video went viral on social media. It showed a SARS officer shooting a young Nigerian outside a hotel in Delta State and then taking his Lexus SUV.

This is the YOUTH that was Shot dead today at Ughelli. His dreams and future truncated by men of the @PoliceNG force

How many more lives are to be wasted before a spade is called a spade?

My day has been ruined. Just look at somebody's Son, brother & Friend.

The disbanding of SARS is only the first step in our commitment to extensive police reforms in order to ensure that the primary duty of the police and other law enforcement agencies remains the protection of lives and livelihood of our people. pic.twitter.com/XjQMSr3jlm

​But the protests continued and Mr Sanwo-Olu - who is from President Buhari’s APC party - announced an indefinite curfew on Tuesday, 20 October, claiming the #EndSars protests had been taken over by criminals.

​But around 1,000 people defied the curfew on Tuesday night at the Lekki toll plaza, sparking the crackdown by security forces.

I address you today with a heavy heart as your Governor. I do so as a father and a brother. I do so as one who is touched by the infirmities and feelings of his people. I do so as a part of the collective humanity that we all share.

​Nigeria is Africa’s most populous nation - with a population of more than 200 million - and the average age is 18.

Many younger people are angry at the lack of employment and prospects and there is growing resentment at the political classes.

I am tired of seeing elderly people analysing the #Endsars Protest on television. It is getting increasingly annoying.

​The same politicians - many of them former army officers - have run the country since independence and none have managed to combat endemic corruption.

The #EndSARS protesters share a lot with the Black Lives Matter campaigners in Britain and the United States, although in Nigeria their anger is directed towards a black establishment.

Nigeria became independent from Britain in 1960 but seven years later the Igbo people tried to break away and create their own state, Biafra, in eastern Nigeria.

it’s so heartbreaking to see what’s happening in Nigeria right now. Words can’t even describe.
May history remember President Buhari as the government who chose to kill Nigerians who were merely protesting their right to not be killed.#LekkiMassacre#EndSARS pic.twitter.com/m0g4roIKwI

​The military - dominated by Christian Yoruba officers from the west and Muslim Hausa officers from the north - eventually defeated the Biafran revolt, but only after millions of civilians, including children, died of starvation.

In recent years an extreme Islamist group, Boko Haram, has harried communities in north-eastern Nigeria and Buhari was elected in 2015 in the wake of the abduction of 276 girls from the town of Chibok, which highlighted the weakness of the security forces under his predecessor, Goodluck Jonathan.