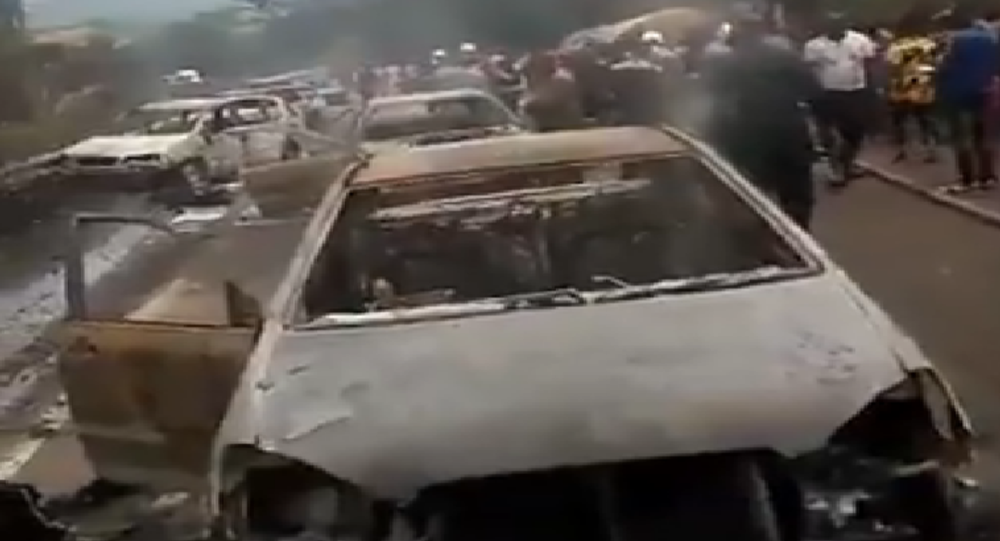 The incident took place in Erin-Ijesha along the Ilesa-Akure expressway in Nigeria’s western state of Osun.

As many as 20 motorists are feared dead after a tanker exploded, Nigerian media have reported.

Road safety officials say the crash took place Monday morning shortly before 11 am after the driver of a Mack tanker filled with diesel fuel lost control of his vehicle, tipping it over on its side. The fuel spilt on the highway and ignited, with flames consuming the truck and 10 other vehicles, including four commercial busses.

Investigators still don’t know the cause of the disaster. However, an eyewitness told Nigeria’s The Nation newspaper that the incident took place after a convoy of buses sought to overtake the tanker along a curved section of the road.

As well as the dead, there were several people injured - local residents rushed to help the wounded and take them to nearby hospitals for treatment. Police, firemen and the Federal Road Safety Corps spent several hours battling the fire and clearing the road in the accident’s aftermath.

A second deadly incident took place nearby on Monday along the Lagos-Ibadan expressway, with four people killed instantly after a DAF truck and a Mazda bus slammed into one another in a head-on collision before dawn. Two people were injured.

The Federal Road Safety Corps recorded more than 8,500 traffic accidents between January and November of 2019, with an estimated 39,800 Nigerians dying in road crashes in 2018.