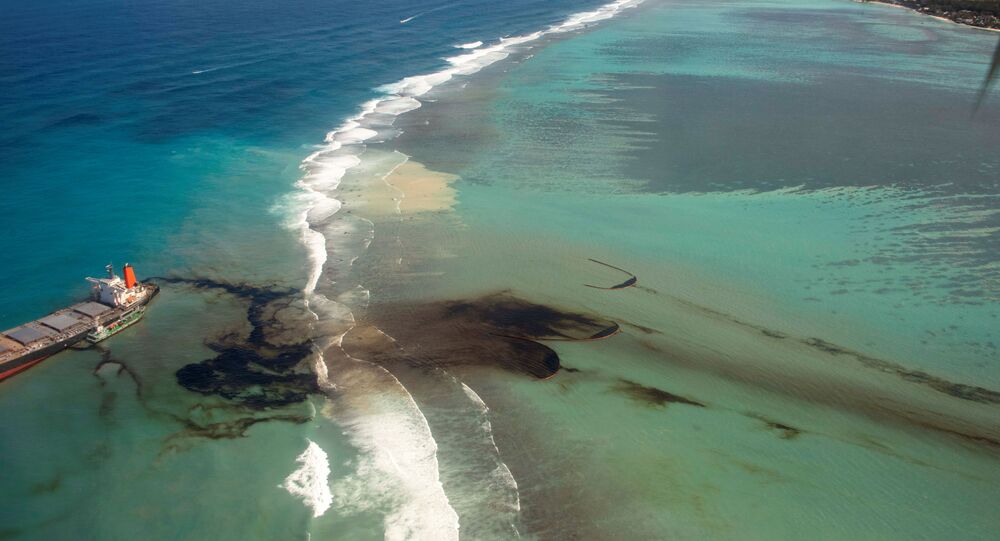 According to the newspaper, thousands have gathered in the centre of the capital, Port Louis, holding national flags and banners that say "My future is in danger because of the government's incompetence", "Do not tolerate incompetence", "I [love] my country, I am ashamed of its government", "Can you hear the dolphins cry?"

Apart from the march in the capital, Mauritius diaspora is also reportedly holding solidarity protests outside the country's embassies around the world, including in the United Kingdom, Canada and Switzerland.

The Wakashio ship of Japanese O. S. K. Lines company was on its way from China to Brazil when it crashed into a coral reef off the coast of Mauritius in the Indian ocean in late July. After it split in two in mid-August, at least 1,000 tonnes of oil got into the water, causing the Mauritius authorities to declare an ecological emergency and ask the UN and Japan to help remove the ship.

© AFP 2020 / Stringer
Who's to Blame? Fingers Pointed as Ship's Oil Threatens to Destroy Coral Reef in Mauritius
Meanwhile, ecologists predict that Mauritius is to endure a long-term recovery due to the devastating consequences of the oil spill, as many people in the country rely on fishing and tourism, curbed by the leak, and the elimination of the consequences is likely to take decades.

The oil spill severely affected dolphins living in the area. During the last check carried out on Friday afternoon, eleven more dolphin corpses were found on the shores of the Mauritius island not far from the oil spill site. According to the recent preliminary results, the death toll of dolphins found on Mauritius shores has raised to 38.