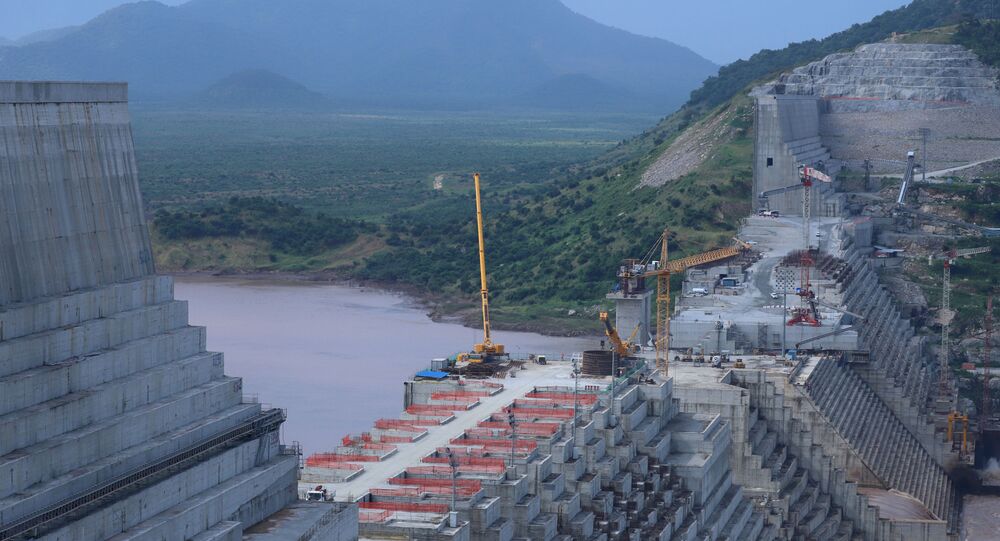 Only 2 Weeks to Go? Ethiopia About to Strike Final Deal on Its Renaissance Dam With Egypt and Sudan

Egypt, Ethiopia, and Sudan have agreed to draft a final version of the agreement about filling the Ethiopian Renaissance dam in two weeks, Ethiopian Prime Minister Abiy Ahmed's office said.

The press secretary of the head of Egypt, Bassam Rada, earlier said that Ethiopia, Egypt, and Sudan had agreed to establish a technical committee to draft the final agreement on the Ethiopian Renaissance dam. Addis Ababa pledged not to start filling the dam without such an agreement. Sputnik has spoken to experts to discuss what the conditions for signing the agreement are, as well as what role supranational players, like the UN and the African Union, will play in drafting the agreement.

Ali Al-Ghatit, ex-president of the Egyptian Branch of the International Law Association, believes that due to Ethiopia's behaviour, Cairo needs to take urgent measures, since the dam addresses freshwater issues vital for Egypt.

"The Nile's waters, questions of its overflow or shallowing have historically been a matter of life and death for Egyptians. Unfortunately, despite our repeated warnings over the past decades, the issue of the Ethiopian dam has been left to ministries, who, in turn, didn't pay due attention to it. And now we've got a crisis that we have to deal with", he said.

Together with the African Union, Egypt now has to work out a mechanism to overcome the crisis.

"Within a short period of time, agreed upon with the African Union, Egypt has to prepare a sufficient number of documents and plans that will allow us not to yield ground to Ethiopia. But, in fact, we should have done this in previous years", he said.

Agreeing on a Roadmap

In turn, Samir Ghattas, member of the House of Representatives of Egypt, believes that most of the international negotiations will nevertheless be held under the mediation of the UN and not the African Union. Moreover, nobody is going to discuss filling the dam, the inadmissibility of such a step is obvious to everyone except the Ethiopian side.

"It's obvious that the African Union is just a platform for attesting and agreeing on the provisions that will be developed under the auspices of the UN. Since it is the UN where Egypt has filed a complaint against the Ethiopian side. Therefore, over the next two weeks, the conflicting parties will have a chance to draft at least some of the most basic points of the agreement on dam operation, which Egypt, Sudan, and Ethiopia will have to strictly observe. Of course, it’s impossible to work out any serious and lengthy agreement in such a short period of time", he said.

Ethiopia has been implementing a large-scale project to construct the Renaissance Dam on the Blue Nile since 2012. The dam's launch is expected to cause water shortages in Sudan and Egypt, located downstream.

Since the start of construction, the three countries have held more than a dozen meetings to resolve issues regarding water distribution and the launch of the new facility, however, there are still disagreements. The parties have two weeks to settle them.