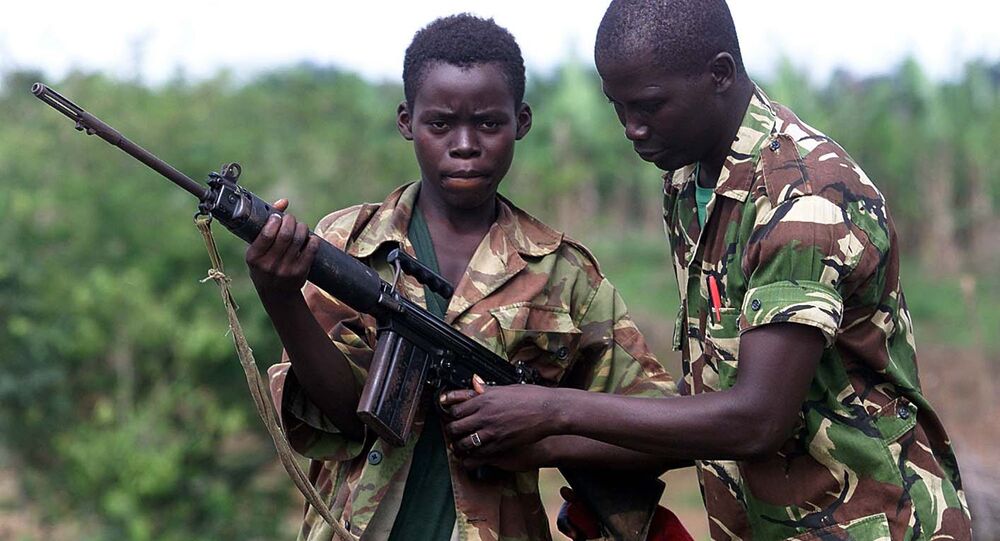 In May 2000 Tony Blair had been Britain’s prime minister for three years and was still very much in his honeymoon period. Suddenly British forces became embroiled in a little-known civil war in Sierra Leone. How and why?

Brad Tinnion, a 28-year-old SAS commando, was the only casualty of Operation Barras, a daring mission to rescue 11 British soldiers being held captive by wild and indisciplined rebels deep in the African jungle.

But why did Bombardier Tinnion have to die in a dark corner of the former British colony of Sierra Leone 40 years after it had gained independence?

“Cry havoc and let slip the dogs of war”

He died so they may live

​The story begins in May 2000 when British troops were deployed as a peacekeeping force in Sierra Leone, which had been riven by civil war since 1991.

Revolutionary United Front rebels, led by Foday Sankoh and heavily backed by Charles Taylor, a warlord from over the border in Liberia, had conquered a large swathe of the country.

The RUF had recruited hundreds of child soldiers and had committed widespread atrocities during the war, including murder, rape and amputation of limbs by machete.

In early 2000 they rejected a peace agreement with the Sierra Leone government and began to threatening the capital, Freetown.

#FromtheField in Sub-Saharan Africa
A former missionary reflects on crisis of belief during civil war in Sierra Leone with the hope of encouraging others. https://t.co/h2f8opjmb2

On 7 May 2000 Brigadier David Richards - who would later become Chief of the Defence Staff - arrived on the ground in Freetown with 1,000 troops.

In his 2014 autobiography, Taking Command, Richards said his mandate had been to evacuate British citizens and avoid getting drawn into the civil between government troops and the RUF.

"Bugger the orders," he reportedly said, deciding attack was the best form of defence. He began to push the RUF away from the capital.

Back in London, on 15 May, Defence Secretary Geoff Hoon painted a very different picture of the role of British troops.

Her Majesty The Queen has also granted Battle Honours for some past operations. The Battle Honour, SIERRA LEONE 2000, with emblazonment is awarded to No. 7 Sqn. @StnCdrRAFOdiham⁩ ⁦@jamesdeeganMC⁩ ⁦@bigphilcampion⁩ ⁦@authordlewis⁩👇https://t.co/m3Aq24dz14 pic.twitter.com/9Kvpy21mdG

​He told Parliament they had evacuated 450 people and were “providing technical advice” to the UN’s peacekeeping force and added: “Although we have consistently made it clear that UK forces will not be deployed in a combat role…the presence of UK troops on the ground has helped stabilise the situation in Sierra Leone.”

Ignoring the politicians, Brigadier Richards pushed on with his offensive, known as Operation Palliser, changing the tide in the civil war and eventually leading to the RUF’s total defeat.

But on 25 August 2000 a patrol from the British Army’s 1 Royal Irish Regiment were overwhelmed by a sudden attack by the West Side Boys, a maverick group of teenagers known for dressing up in women’s wigs and flip-flops.

The West Side Boys - who originally owed allegiance to another rebel group which was opposed to both the RUF and the government - spent most of their time getting drunk on palm wine, taking drugs, listening to rap music and torturing any villagers who got in their way.

Lieutenant Colonel Simon Fordham, who led the negotiations with the West Side Boys, later recalled to the BBC his impressions of them: “They had spent the last two years doing atrocities, highway robbery, just general mayhem. A very violent, very unpredictable crew.”

They were heavily armed and when they took the 11 British soldiers and their Sierra Leonean liaison officer, Musa Bangura, back to their lair in the Occra Hills it gave Brigadier Richards and his bosses back at the Ministry of Defence in London a major headache.

What transpired next is unclear because Ministry of Defence files remain sealed.

But the top brass of the British military no doubt consulted the Prime Minister, Tony Blair, and he gave them the green light to launch a daring rescue mission using the SAS and paratroopers.

The Special Air Service (SAS) is an elite unit of commandos which operates largely in the shadows but its most famous moment in the spotlight was in 1980 when the SAS rescued hostages during a siege the Iranian Embassy in London.

At dawn on 10 September 2000 more than 150 paratroopers and SAS commandos were dropped into a tiny village beside the Rokel Creek by five British helicopters.

A huge gunfight broke out - during which Bombardier Tinnion received his mortal wounds - but the rebels were not only caught by surprise but were also hungover, having spent the night before up partying.

But around an hour later the hostages had been rescued and were flying back to Freetown in the choppers, leaving behind 25 dead West Side Boys.

They also freed 22 local women - who had been taken captive as what the rebels called “sex combatants” - and captured Foday Kallay, who later described the British attack to The Guardian’s Chris McGreal: “Their firepower was unmatchable. We could not escape.”

Britain’s then Foreign Secretary Robin Cook praised the "professionalism and discipline" and said: “The (West Side Boys) leadership is now behind bars. Their headquarters has now been destroyed."

Not a Happy Ending For Everyone

Peace returned to Sierra Leone in 2002 but the country remains impoverished and Britain is the largest international donor.

“Tony Blair is an old friend to us in Sierra Leone dating back to the days when he was Prime Minister. Indeed, he helped us at a time when we needed it most,” says the country’s former president Ernest Bai Koroma.

The glowing tribute can be found on the website of the Tony Blair Institute for Global Change.

Bombardier Tinnion’s girlfriend of 10 years, Anna Tomsi was denied a widow’s pension because the couple had not been married but in October 2001 she was offered a one-off payment of £250,000.

She had been pregnant at the time of his death with their daughter, Georgia.