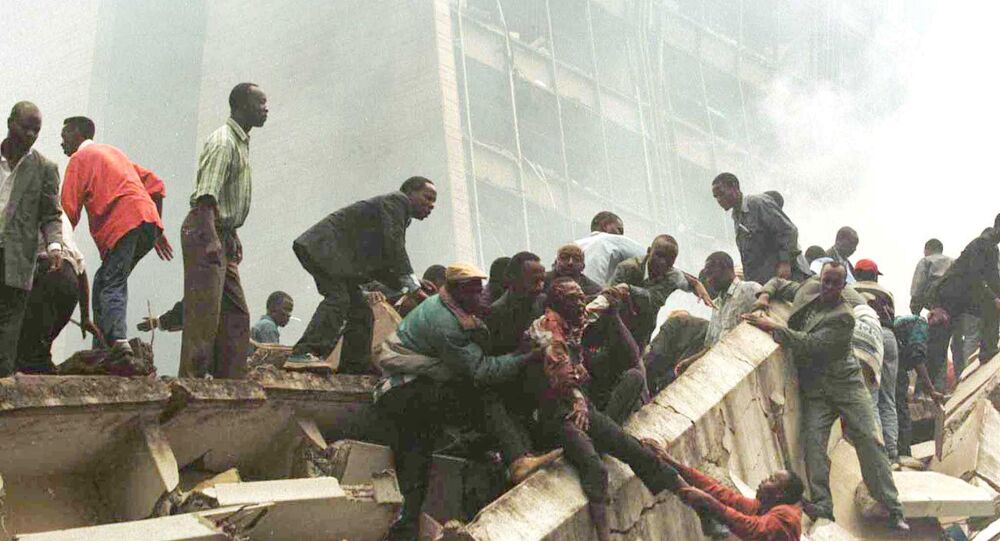 The US Supreme Court has ruled that Sudan must pay damages for the 1998 US embassy bombings in Kenya and Tanzania by al-Qaeda. The decision comes as Khartoum attempts to get removed from Washington’s list of state sponsors of terrorism.

The ruling overturned a lower court’s 2017 decision, reinstating roughly $826 million out of a total of $4.3 billion in punitive damages, Reuters reported.

On August 7, 1998, near-simultaneous truck bomb explosions at the two US embassies killed 12 Americans and 212 other people and injured more than 4,000. The bombings put al-Qaeda and its leaders, Ayman al-Zawahiri and Osama bin Laden, on Washington’s radar and earned the latter a spot at the top of the FBI’s Most Wanted List.

Two weeks later, then-US President Bill Clinton ordered a series of cruise missile strikes at purported al-Qaeda sites in Afghanistan and Sudan. Dubbed Operation Infinite Reach, the strike that hit al-Shifa, Sudan, did not destroy an al-Qaeda chemical weapons factory, as was believed, but instead annihilated a pharmaceutical factory responsible for half of medicine production in one of the world’s poorest countries.

However, the US Supreme Court denied an attempt in 2010 by the owners of the al-Shifa plant to win $50 million in compensation for the wrongful attack.

In response to the Monday Supreme Court decision, the Sudanese Ministry of Justice said in a statement carried by the Sudan News Agency that the country “will remain engaged in negotiations with the United States of America ... and to work to fully normalize relations between the two countries in order to completely free the Sudanese people from one of the heaviest legacies of the defunct regime.”

The court ruling comes amid an effort by Sudan’s new government to get itself removed from the United States’ State Sponsors of Terrorism list.

According to the Council on Foreign Relations, Sudan was placed on the list in 1993 amid its purported support for several Muslim groups designated as terrorist organizations, including Egyptian Islamic Jihad, Hamas and al-Qaeda, among others. While former longtime dictator Omar al-Bashir began to increasingly cooperate with the US in the War on Terror, the US never removed Khartoum from the list, even as the US State Department called it a “strong partner in the War on Terror.”

The irony of that statement is palpable, given that just a few weeks later, then-US President George W. Bush denounced actions by the Janjaweed tribal militia supported by Bashir in Sudan’s Darfur region as an act of genocide.

In April 2019, Hajooj Kuka, a member of the Sudanese activist group Girifna that helped overthrow Bashir earlier that year, told Sputnik that Bashir had been a longtime darling of Washington, which sought to turn him from poacher into gamekeeper.

“What happened was two things: one, the CIA really loved Omar al-Bashir, because he had Islamic ties. It was an Islamic military dictatorship, so he had a lot of connections with Islamic groups, and he was able to help the CIA a lot with giving up information in return for money," getting sanctions against him removed, because the CIA "cared more about terrorism and whatnot than human rights and dealing with a dictator,” Kuka told Radio Sputnik’s By Any Means Necessary.

In November 2019, Tibor Nagy, the State Department’s assistant secretary for African affairs, noted that the new transitional government that replaced Bashir might be taken off the State Sponsors of Terrorism list, but added it would be “a process.”

One step in that direction happened last week when the State Department updated a related list: the list of countries certified as not cooperating fully with US counterterrorism efforts, leaving Sudan off of it. But that, too, can be something of a political game, as Sputnik recently reported that Cuba had been added to the list following spurious accusations.

However, one circumstance that frustrated the process was the stalling of the power transition process as a result of the COVID-19 pandemic. As Sputnik has reported, when Bashir stepped down in April 2019, power passed through a group of the dictator’s confidants and close affiliates, with further moves away from military rule only coming amid continued mass resistance in the streets of Khartoum.

The present prime minister, Abdalla Hamdok, has led the country’s transitional cabinet since August and is the first to come from outside Bashir’s former government. The British-educated economist was nominated by the Forces of Freedom and Change, the broad umbrella formation roughly encompassing the revolutionary aspects of Sudanese society.