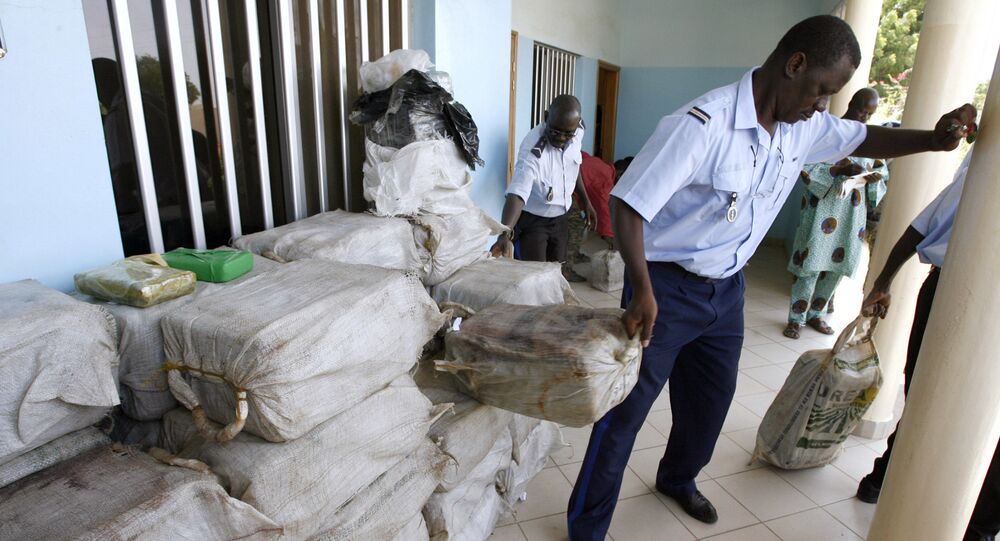 As a strategic port, Dakar has become a true regional transport hub for the Senegalese economy. Drug dealers also want to use the port to export drugs to Europe, despite the risks involved.

From January to April 2020, the Senegalese Navy and customs reported the confiscation of 6 tonnes of hashish and 120 kilograms of cocaine during raids on the high seas as well as in the port of Dakar. Impressive raids were also carried out in 2019, when the number of potent drugs seizures sharply increased. As a result of six major operations, at least 2,079 kilograms of cocaine were confiscated.

Mouhamadou Kane from the Enhancing Africa’s Response to Transnational Organized Crime (ENACT) programme, notes that “in the past few years, Dakar has been relatively aloof, but now criminal networks...have turned Dakar into a new subregional cocaine trafficking hub.”

Apart from its geostrategic location, Dakar has West Africa’s third largest port after Lagos and Abidjan. Sailing and container ships often stop there on their way to Europe and America.

Increased attacks on the port are perplexing, given that Senegalese customs services are quite effective in combating drug trafficking. However, according to Mouhamadou Kane, there is a logical explanation:

“In 2017, global cocaine production broke a record, reaching 2,000 tonnes. Drug cartels had to sell the cocaine produced. They decided to export it to the two most important for their business areas, Europe and North America. This was necessary, even if they knew that not all goods would reach the customers safely.”

In the summer of 2019, Commissioner Cheikhna Keïta told the Senegalese news outlet Emedia about the strategy of the drug cartels. “Drug dealers are smart. They carry out several shipments at once. When they want to ship 10 tonnes of cocaine, they ship 100 tonnes. Thus, they have a guarantee that some of this cocaine will definitely reach the destination before law enforcement agencies track the shipments.”

Drug dealers don’t stand their ground and don’t take risks for the sake of risk. Pragmatism and flexibility are some of their qualities, which allow them to adapt to a variety of situations and achieve their goals, Kane stressed.

“In addition to traditional drug trafficking routes, they decided to open new routes, for example, through the relatively well-managed port of Dakar. Last year, even through the port of Banjul, drug lords transported lots of cocaine, although before they hadn’t even thought of such a route”, he added.

Having become a subregional transport hub, the Senegalese capital seems to serve as drug trafficking starting point. From Dakar, drug dealers send goods in different directions. In February 2019, Guinean-Bissau police intercepted a truck with a Senegalese sign, with 800 kilograms of cocaine worth about 64 billion CFA francs (about €98 million).

“There is almost no subregional country that has no illegal drug trade. But coastal states are a favorite target of South American cartels. Back in 2016, the UN Office on Drugs and Crime (UNODC) called Senegal, Cape Verde and Ghana the largest cocaine trafficking hubs,” Kane said.

In early 2019, in Cape Verde, the largest cocaine batch in the history of the country, 9.5 tonnes, was confiscated. The Gulf of Guinea was also at the centre of the action: in December 2019, 750 kilograms of cocaine were discovered in the port of Cotonou. Benin remains the favorite destination of drug traffickers who ship large quantities of synthetic drugs, such as methamphetamine.

“Africa is no longer just a drug trafficking transit point. Recent studies have shown that more and more drugs remain in the region. There is no doubt that our country is a cocaine consumer; the drug rates third after marijuana and Mandrax [methaqualone]. Cocaine is more expensive and therefore only the richest people living in the elite neighborhoods can afford it. This partly explains why cocaine is increasingly transiting through Dakar.”

This theory is proved by constant thefts of cocaine from batches confiscated by various drug control agencies. 80 kilograms of the 798 kilograms of cocaine discovered by the customs in the port of Dakar in June 2019 disappeared, although all the “goods” had already been sealed.

“Generally, Senegal always had problems with drug theft, since when arrested, drugs are not well guarded. It even happened that the seals disappeared,” the former head of the Senegalese anti-drug department recalled.

The country’s authorities have started creating a department to combat illegal drug trafficking, which should become more effective and less prone to corruption. It will work together with a special anti-drug prosecutor’s office. Such huge changes are correlated with other programmes that are now being implemented in West Africa and the Gulf of Guinea.

“In 2008, with the support of UNODC, the Economic Community of West African States developed an action plan to combat drug trafficking. The West African Coast Initiative (WACI) was launched in 2009 to co-ordinate the fight against drug dealers through anti cross-border crime units between countries such as Côte d'Ivoire, Sierra Leone, Guinea-Bissau and Liberia,” Kane explained.

Of course, states and international organizations are doing a lot to stop or slow down the growth of the drug business. But it seems that drug dealers are always a few steps ahead.