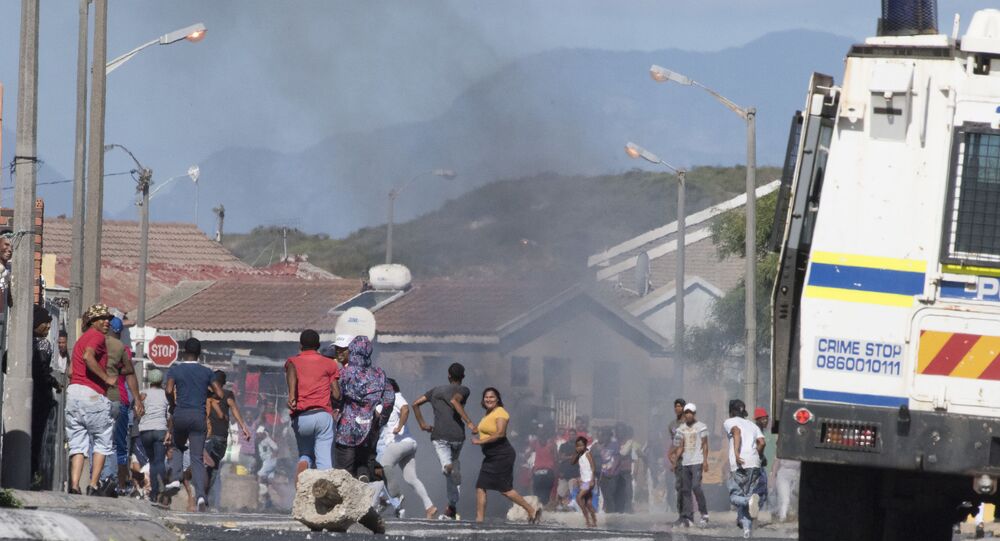 As Africa is yet to reach the peak of its confirmed cases of coronavirus, a UNECA-released report claims the continent might become a breeding ground for the pandemic, with COVID-19 expected to soar and the food security of some 25 million Africans threatened by a desert locust crisis

Riots have been erupting across countries in Africa as the coronavirus and lockdown procedures installed in a bid to try and slow down its spread have dramatically exacerbated food shortages, reported the Daily Mail.

Several violent protests have broken out across South Africa over access to food parcels being handed out by authorities, with people defying social distancing measures, hurling rocks at police and setting up street barricades. Police have been dispersing angry crowds with tear gas and rubber bullets.

"Mr President we are in the middle of a food crisis. It’s war out here!" This plea on social media from a community leader in Mitchells Plain township in Cape Town, South Africa, underscored the volatility of the situation.

Joanie Fredericks addressed the plea to President Cyril Ramaphosa over the five-week lockdown imposed to try and slow down the spread of the coronavirus.

As huge crowds have been queuing for food distributed by Fredericks and other volunteers, the community leader voiced his fears for how things might spiral further out of control.

“When we started out feeding people we started out with the very vulnerable, ...the children, the disabled people and the pensioners. But we are way past that Mr President, we are past the stage of sending people away,” an emotional Fredericks pleaded.

Residents were quoted as saying hunger has driven people to loot shops in Cape Town, with skirmishes breaking out, as the fourth week of a 35-day shutdown installed on 27 March led to many losing their informal earnings.

“There's a bunch of us at home getting fat and there's a bunch of people who really have nothing… And it speaks a lot about the inequalities in South Africa (that) are likely to come out,” Julian May, director of the Centre of Excellence in Food Security, at the University of the Western Cape was cited as saying.

“As people are not getting food parcels or hear of other people getting parcels they are starting to react. And I don't think that's going to ease unless there's more rapid delivery of food to people in poor areas.”

The Institute for Poverty, Land and Agrarian Studies (PLAAS) issued a warning that "there is every likelihood of violent conflict, including widespread looting", amidst videos shared on social media showing supermarkets being stormed in recent days.

In Lesotho, an enclave within the borders of South Africa, the army was mobilised to deal with the unrest.

In an address on public television on 18 April Lesotho's prime minister Thomas Thabane announced troops would be “restoring order”.

“This is to avoid putting the nation in danger,” said Thabane.

In Nigeria the government announced that Abba Kyari, chief of staff to President Muhammadu Buhari, had died of COVID-19.

Earlier, there were reports of several government ministers and a US ambassador becoming infected with the coronavirus in Burkina Faso.

Zimbabwe, celebrating the 40th anniversary of its independence on 18 April, eschewed the traditional pomp due to a coronavirus lockdown, with President Emmerson Mnangagwa addressing the population on national television to voice optimism regarding efforts to contain the spread of the virus in the country, which to date has only 24 cases.

As the three-week lockdown earlier imposed ends this Sunday, the President thanked citizens and donor countries “for the collective response” in trying to fighting the pandemic.

Earlier, the UN warned that areas of the developing world, particularly in Africa, risked famine as a result of the coronavirus pandemic. Deploring the fact that lockdowns and travel restrictions were impeding humanitarian relief efforts, experts were cited by the Guardian as warning the current unrest starting to grip the continent could spiral out of control.

“From a food security perspective, some places are very close to famine… The number of people on the verge of being extremely vulnerable was already very high. What we fear is that this number will further increase because of the impact of Covid-19 on food security,” Dominique Burgeon, the director of emergencies at the UN Food and Agriculture Organization (FAO) was quoted as saying.

Compounding the pandemic crisis was the fact that swathes of the horn of Africa were struggling to deal with swarms of locusts attacking crops, in the worst outbreak registered in over 70 years.

Already prior to the COVID-19 pandemic, some 20 million people were estimated to be in danger of food insecurity.

Africa has currently registered more than 1,000 deaths from COVID-19, the Africa Centers for Disease Control and Prevention said on 18 April, with a reported total of 52 of Africa's 54 countries acknowledging cases of the disease.

On 17 April the World Health Organization said a 51 per cent increase in cases in Africa and a 60 per cent spike in the death toll had been registered in the past week, while warning that a shortage of testing could signify “the real numbers are higher than reported.”