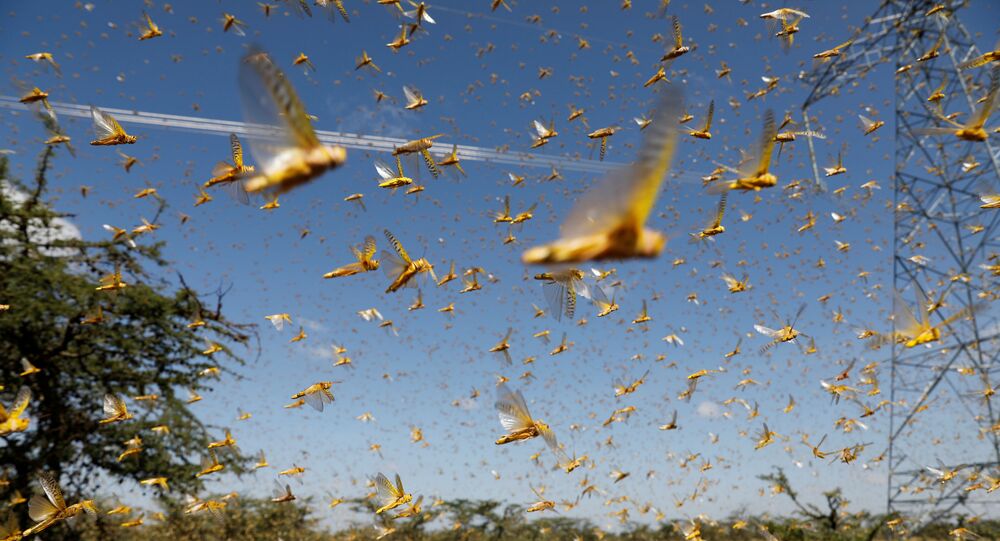 Swarms of desert locusts have been flooding parts of East Africa since last summer, threatening a fragile food security situation in the region, as one swarm can consume the same amount of crops per day as 10,000 people.

The locust plague, which originated in Arabian Peninsula in 2018, has been devastating the region since last June, by consuming crops in Kenya, Uganda, Somalia, Ethiopia, Sudan and other East African countries. Triggered by heavy rains and thriving vegetation, the situation has been especially devastating in Kenya, where locusts are estimated to have  destroyed at least 30% of grassland since the early months of 2020. They have also been laying a lot of eggs, which have started to crack open since February, and the new generation of pests has started to grow in size to begin attacking Kenyan land.

“That’s what’s been happening in Kenya this past month. More and more of those hoppers have become adults. So, these are Made in Kenya”, explains Keith Cressman, a United Nations Food and Agriculture Organization’s (UN FAO) senior locust forecaster.

© REUTERS / Baz Ratner
A man attempts to fend-off a swarm of desert locusts at a ranch near the town of Nanyuki in Laikipia county, Kenya, February 21, 2020

Just in a week or so, the new generation of locusts will start to lay their own eggs and that’s when the situation is expected to get even worse. Experts believe that nearly a hundred percent of crops of barley, beans and maize could be consumed by the pests in the upcoming months, leaving the local communities to starve. The swarms can still be controlled with the help of pesticides, food experts argue, until they are pushed further north by a dry season this summer.

© AP Photo / Ben Curtis
Plague Alert: Swarms of Voracious Locusts Predicted Heading for Middle East
One swarm of locusts is estimated to consist of around 150 million individual locusts per square kilometre, and these daily consume the food available for up to 35,000 people, potentially aggravating the already fragile food security situation in the region even further. The ongoing Covid-19 pandemic has also exacerbated the crisis, as shipments of biopesticide necessary to contain the locust plague have now been severely curtailed due to travel restrictions. Many East African countries, including Kenya, are now also running low on pesticides, which poses a significant challenge to any locust control activities in the region.
...
Reddit
Google+
Blogger
Pinterest
StumbleUpon
Telegram
WhatsApp
629
Tags:
Somalia, COVID-19, locust, Kenya, East Africa
Community standardsDiscussion