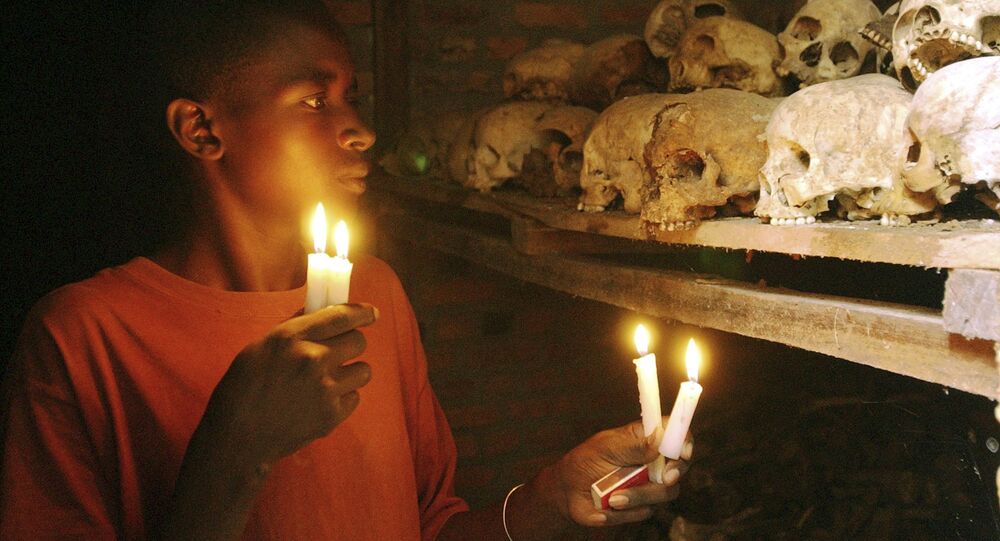 The executive secretary of the genocide survivor organisation Ibuka said that work to exhume the bodies has been hampered by water from a dam located near the area and the coronavirus lockdown, which prohibits people from gathering in large numbers.

A mass grave that was recently discovered in Rwanda could contain the bodies of up to 30,000 victims of the 1994 genocide, officials said. The discovery was described as extremely important for Rwandan society. The mass grave was found following a tip-off from perpetrators of the genocide who recently completed their jail sentences. It is located outside the capital Kigali in a valley dam that officials say was built years before the genocide in order to provide water for farming. 50 bodies have been exhumed so far.

"The challenge we face now is that the valley dam contains water, but we are trying to dry it up. But we try our best so that we give the dead a decent burial", Naphtal Ahishakiye, the executive secretary of the genocide survivor organisation Ibuka, told the Associated Press.

The discovery was made just days before Rwanda marked the 26th anniversary of the start of the genocide on 7 April. This year, there will be no large-scale events, as gatherings are banned due to the coronavirus outbreak.
President Paul Kagame is expected to light the "Remembrance Flame" at the Kigali Genocide Centre. The flame will burn for the next 100 days, the amount of time that the killings went on for in 1994. The whole country will be in mourning for the next 100 days.

UN Secretary-General Antonio Guterres posted a video statement on his Twitter account, saying the world must say no to hate speech and xenophobia.

More than 1 million people were systematically murdered in just 100 days during the genocide against the Tutsi in Rwanda.

We must never again let such an atrocity occur. We must say no to hate speech & xenophobia & reject the forces of polarization, nationalism & protectionism. pic.twitter.com/54LdvZTsTO

How did it all start?

Although most of the Rwandan population are Hutus, the country was governed by the Tutsi minority until 1959, when their rule was overthrown. Purges of Tutsis started following the overthrow, forcing them to flee to neighbouring countries, including Uganda, Tanzania, and Zaire - now known as the Democratic Republic of the Congo.

Tutsi refugees formed the Rwandan Patriotic Front (RPF) and in 1990 the group invaded Rwanda, which led to the start of a civil war in the country. The conflict ended in 1993 with a peace accord between the RPF and the government of Juvenal Habyarimana.

On 6 April 1994, a plane carrying Rwandan President Habyarimana and Burundi’s President Cyprien Ntaryamira, both Hutus, was shot down as it prepared to land in the capital Kigali. The responsibility for the downing was disputed, with the Hutu-led government and the Tutsi RPF blaming each other.

The genocide began the next day. Military and police officers executed key Tutsi political leaders and other prominent figures. Officials and government radio stations called on Hutu citizens to take part in the killings. According to various estimates, between 800,000 and one million people were slaughtered in the ensuing massacre. This number includes Tutsis, Hutus who opposed the genocide, and pygmy people known as the Batwa.

The genocide ended after the RPF took control of the capital, forcing Hutus to flee to neighbouring countries.

In 2017, Pope Francis acknowledged that Catholic priests and nuns took part in the killings and asked for forgiveness.

The international community did little to stop the slaughter and the United Nations was not given a mandate to act, while most of the UN and Belgian troops that were in Rwanda at the time of the genocide were pulled out.