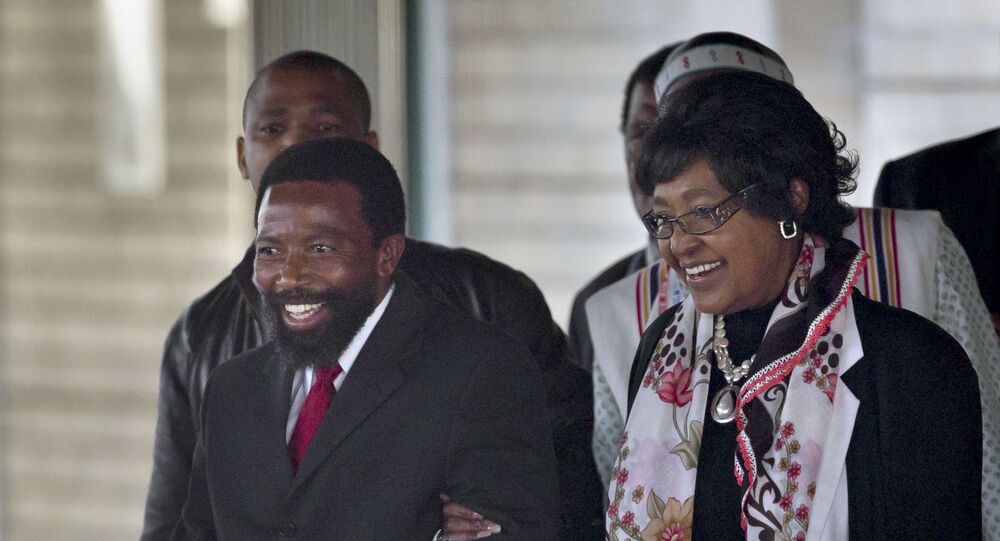 In 2015, King Buyelekhaya Dalindyebo, a nephew of late South African President Nelson Mandela, was sentenced to 12 years in jail for arson, aggravated assault, and kidnapping; he was granted parole late last year, in a move endorsed by the country’s incumbent president, Cyril Ramaphosa.

South African King Buyelekhaya Dalindyebo has been arrested after he reportedly went on an axe rampage at a royal palace in the Eastern Cape Province during the early hours of Friday.

Royal spokesman Prince Siganyeko Dalindyebo told the local public broadcaster SABC that the 56-year-old, who belongs to the traditional Thembu clan of late South African President Nelson Mandela, had broken into the palace “carrying weapons such as [an] axe, a machete, and also a crowbar”.

According to the spokesman, the king “managed to break a window from the sitting room of the main house”.

“As he was moving up the stairs looking for the acting king, some people managed to distract him and then the acting king managed to jump out of a window, running for safety. He has wreaked havoc in the palace […] he started ransacking the king's room, all confidential documents - he threw them around” before being detained by the police, the Prince asserted.

Matthew Mpahlwa, a royal advisor to Dalindyebo, for his part claimed that “the details of what happened upon his [the king’s] arrival in the royal palace remain sketchy”, adding that “allegations will remain allegations”.

The arrest comes amid tensions in the Thembu royal family which have been simmering since Buyelekhaya Dalindyebo’s release from jail last year.

KING OF the #abaThembu is the most popular KING in the XHOSA speaking world ... KING BUYELEKHAYA DALINDYEBO who is in prison in the EC , now his Son is the KING ... KING Azenathi Zanelizwe Dalindyebo pic.twitter.com/z8yidb5yxX

He reportedly refused to see his son, acting King Azenathi Zanelizwe Dalindyebo after the royal household ruled that Azenathi should continue on as regent over the next twelve months.

Buyelekhaya Dalindyebo was put behind bars in 2015 after he received a 12-year sentence for arson, kidnapping, and aggravated assault.

He was granted parole in December, when South African President Cyril Ramaphosa announced that certain categories of prisoners should be released.