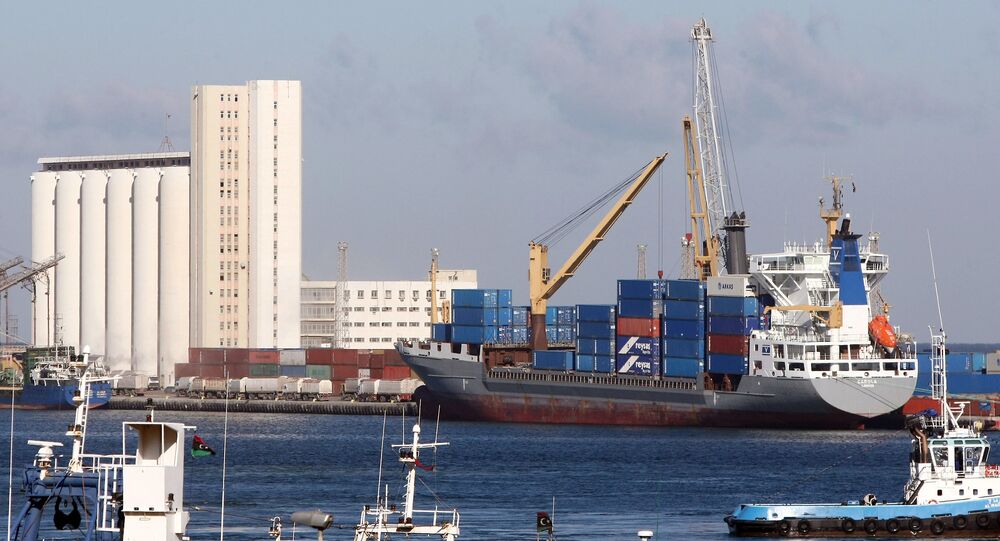 The situation in the North African country, which was dragged into a civil war after the death of former leader Muammar Gaddafi in 2011, recently escalated as Ankara entered the fray, deploying military advisors to back the Tripoli-based Government of National Accord (GNA), fighting against Khalifa Haftar’s Libyan National Army (LNA).

The satellite intelligence company ISI has provided a photo from the port of Tripoli, claiming it confirmed an attack on cargo at the port docks near an alleged Turkish cargo ship, which is believed to have carried goods to Libya. The satellite image is said to feature the vessel and the cargo with smoke rising from it.

​The photo was published following a statement by the LNA on Facebook that its forces had destroyed a Turkish vessel, carrying weapons and ammunition docked in the port of Tripoli. While the forces backing Khalifa Haftar have accused Ankara of violating an international ban on arms sales to the country by delivering this cargo, Turkey could not confirm claims that its vessel had been destroyed in the port of Tripoli.

The op’s representative Mustafa al-Mujai reported heavy damage at the hub, said to be vitally important for transporting food and medicine to Libyans. The GNA also accused the general’s forces of war crimes and called on the international community to implement ceasefire decisions.

In response, the GNA suspended peace talks in Geneva, where the sides are to negotiate the ceasefire, until “firm positions” against Haftar are adopted. They accused him of provoking a crisis in the area.

"It is clear the objective of the systematic bombardment of residential areas, the airport and the port, in addition to the total blockage of oil installations, is to provoke crises for the citizens in all aspects of their life”, the GNA statement said.

Amid the escalation in the port of Tripoli, Haftar met Russian Defence Minister Sergei Shoigu to discuss the situation. As the Russian Defence Ministry stated, they “remarked on the importance of the talks that took place in Moscow on 13 January for a ceasefire and launch of the normalisation process in the country”.

In January, Russia and Turkey’s foreign and defence ministers spoke in Moscow in the so-called "2+2" format before their representatives met with the GNA and LNA delegations separately. However, the Russian Foreign Ministry later confirmed that Haftar had left Moscow without signing a ceasefire agreement with the head of the UN-backed GNA Fayez al-Sarraj.

© AFP 2020 / ADEM ALTAN
Erdogan Announces Turkey is Sending Troops to Libya
Ankara has repeatedly expressed support for the UN-endorsed GNA, which currently controls the western part of Libya. The Tobruk-based government, supported by the LNA, has accused Turkey of trying to conquer the country. As the situation flared up, Turkey insisted that Field Marshal Khalifa Haftar "must be stopped" and signalled a readiness to deploy troops to protect the GNA. Haftar, in turn, announced mobilisation to resist foreign intervention.
...
Reddit
Google+
Blogger
Pinterest
StumbleUpon
Telegram
WhatsApp
215