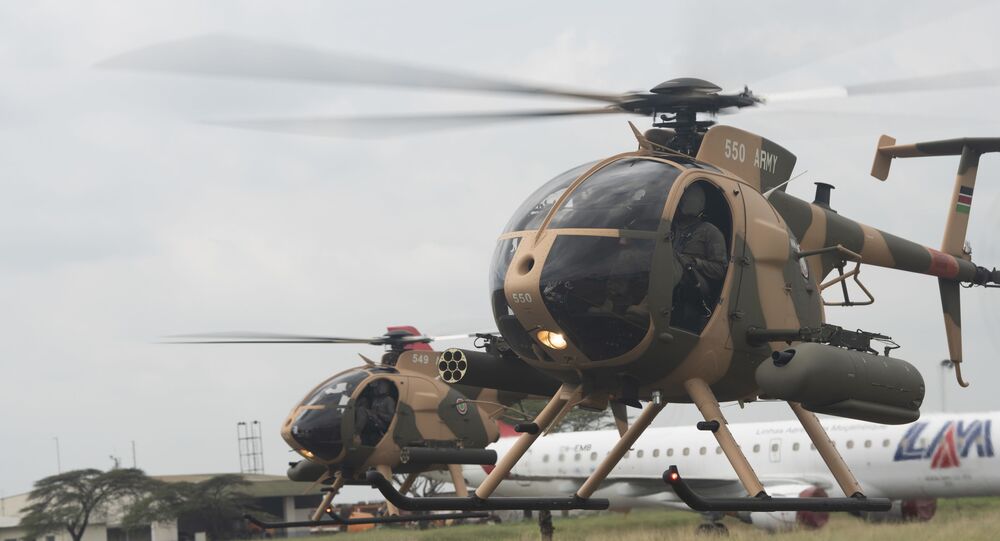 The US has delivered six light attack helicopters to the Kenyan military weeks after an al-Shabaab attack on a US base there killed three Americans. The move comes amid a debate in US foreign policy circles about withdrawing significant US forces from Africa.

On Thursday, six MD-530F Cayuse Warrior light attack helicopters arrived at Embakasi Barracks in eastern Nairobi, where a symbolic handover ceremony transferred the aircraft from US Army to the Kenyan Army’s Joint Helicopter Command, according to a press release by US Africa Command (AFRICOM).

“In getting the MD-530 aircraft we are proving ourselves as an effective force multiplier on the battlefield,” Kenyan Defense Force Chief Gen. Samson Mwathethe said during the ceremony. “The successful delivery of these assets could not have come at a better time for us.”

The helicopters, which are modified versions of the civilian MD 500 commonly used by police and forestry departments for observation, were bought through the Foreign Military Sales program run by the US Department of State. The deal is valued at $1.4 billion and includes training and logistics support, as well as a second batch of six helicopters, Air Force-Technology reported.

‘Take Ownership of the Problem’

Under US President Donald Trump, Washington has pared back its financial commitments in Africa, with the fiscal year 2020 budget that began this past October seeing a 57% reduction in US aid to Kenya, to just $43.5 million. While much of that covers civil programs such as Pepfar, a health initiative combating HIV/AIDS transmission, it also includes military aid.

Following shifts in US defense strategy under Trump toward “great power competition” with Russia and China, the Pentagon has begun exploring the withdrawal of significant US forces from AFRICOM.

US Defense Secretary Mark Esper told reporters earlier this week the Pentagon was weighing the redeployment of between 6,000 and 7,000 troops from AFRICOM to US Indo-Pacific Command (INDOPACOM), part of a larger shakeup that could affect some 200,000 US service members around the globe.

That means that US partners in Africa must pick up more of the slack as American forces depart. The Pentagon’s 127 Echo program has a $100 million budget to train “surrogate forces” able to “take ownership of the problem,” freeing up US troops.

In addition, some US allies like France, which once ruled a vast colonial empire in western Africa and retains strong economic and political ties to a number of those countries, have agreed to small troop increases, with Paris announcing last week it would send another 220 troops to the region.

‘Could Not Have Come at a Better Time’

The helicopters arrive amid continued fallout from a January 5 attack on a US air base in Kenya by the militant group al-Shabaab, which has close ties to al-Qaeda.

The group staged a mortar bombardment before dawn of Camp Simba and the Manda Bay air base near the country’s southeastern coast, killing one American soldier and two American contractors. The attack also damaged six aircraft.

​New details released by AFRICOM earlier this week revealed that Kenyan soldiers hid in tall grass during the early stages of the attack, but that US forces botched their defense as well, with the base commander reportedly taking an hour to respond, The New York Times reported.

Kenyan military leaders rejected the accusations, telling the Nairobi-based Daily Nation it was “strange” to hear firm conclusions about the attack while the Joint Board of Inquiry had not yet completed its investigation.

“Americans’ response after the attack was not swift. It is Kenyan soldiers who were the first responders to the attack during which they managed to fell five of the al-Shabaab attackers,” a spokesperson for Kenya’s Department of Defense told the Nation.

After the attack, the Pentagon dispatched between 50 and 100 more troops from the 101st Airborne Division to Manda Bay to bolster security at the base, which is close to the border with Somalia, where al-Shabaab retains significant sway. In 2013, the airstrip was extended to allow C-130 Hercules transport aircraft to operate from it, easing the transfer of larger troop numbers as well as Manda Bay’s use as a drone base for the Pentagon’s undeclared wars in Somalia, Yemen and Libya.

US Deploys Additional Troops to Base in Kenya After Attack - Statement