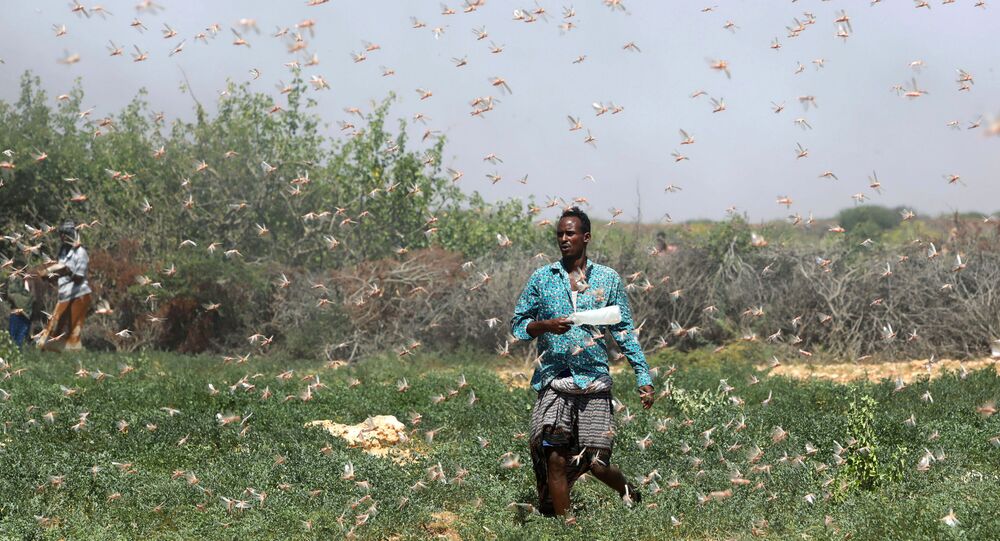 Dozens of eerie videos shared on social media over the past few weeks show swarms of locusts descending on north-eastern Kenya, amid desperate attempts by locals to drive them away.

Terrifying swarms of locusts have been laying waste to swathes of areas in Kenya, devouring crops and grazing pastures, with farmers agonizing over the impact on their livelihoods and deploring ineffective government efforts to spray the area with insecticides.

The invasion of the locusts has been widely shared on social media platforms, with footage showing swarms of locusts laying waste to regions in north-eastern Kenya. Local people have been desperately attempting to drive them away by banging pots and pans, yelling, honking horns and even firing shots.

​Many local farmers have been considering abandoning the sites which they fear have been contaminated by bacteria.

One cow herdsman in Wajir was quoted by Les Observateurs - France 24 as saying the cloud of locusts that descended upon them was huge, with “branches of the bushes breaking under their weight”.

As the herdsmen are still trying to bring the animals to pastures that haven’t been affected by the locusts yet, many are wondering if any will be left if the invasion continues.

Locals are blaming corruption for the lack of preparedness in dealing with the locust invasion#Kenya #Ethiopia #Somalia #LocustInvasion pic.twitter.com/VACXdX8Fi6

Wajir County is one of the areas that has been hit the hardest by this invasion, with farmers terrified for their livelihoods.
A local radio operating in Wajir city, the capital of the eponymous country, has been alerting residents of incoming fresh waves of locusts.

As yet another wave of insects descended on the village of Shanta Abak, locals decided to set the trees on fire in the hope that the smoke would chase them away. However, their efforts only resulted in inadvertently starting a huge brush fire.

Around 40 million locusts are believed to have descended on the area since late December as part of 12 different waves, according to the authorities.

“It’s the worst invasion since 1957 and the worst invasion that I’ve ever seen. The government is trying to kill them by flying planes over the area to spray it with insecticide, but that hasn’t worked yet,” editor-in-chief of Wajir Community Radio Halima Kahiya quoted locals as saying.

“Everyone is worried, but livestock farmers are the most affected. The locusts seem to destroy more grazing land than crops. They eat the grass and leaves that our goats, sheep, cows and camels usually feed on.”

Aside from destroying fields, the locusts have been presenting a deadly hazard for pilots. On 12 January an Ethiopian Airlines flight was rerouted after locusts covered the windshield of the cockpit.

Swarms of desert locusts had swept the Arabian peninsula, Ethiopia, Somalia, Djibouti and Eritrea prior to invading Kenya.
One cloud of locusts was said to have measured 50 kilometres by 40 kilometres (2 000 km² or 772 square miles), according to the Desert Locust Control Organization for Eastern Africa, based in Addis Ababa, Ethiopia.

Desert locusts are the most dangerous type of migratory pests in the world, according to the Food and Agriculture Organization of the United Nations (FAO), as they reproduce rapidly and prolifically. The insects are able to cover extremely long distances in short amounts of time.

Recently, the Kenyan government announced that it would be increasing efforts to aerially spray affected areas with insecticide.
Previous efforts to contain the onslaught with insecticides had been ineffective, authorities admitted on 16 January.

On 18 January it was announced that fenitrothion, a powerful insecticide most often used against mosquitos, would now be resorted to in efforts to deal with the locusts.