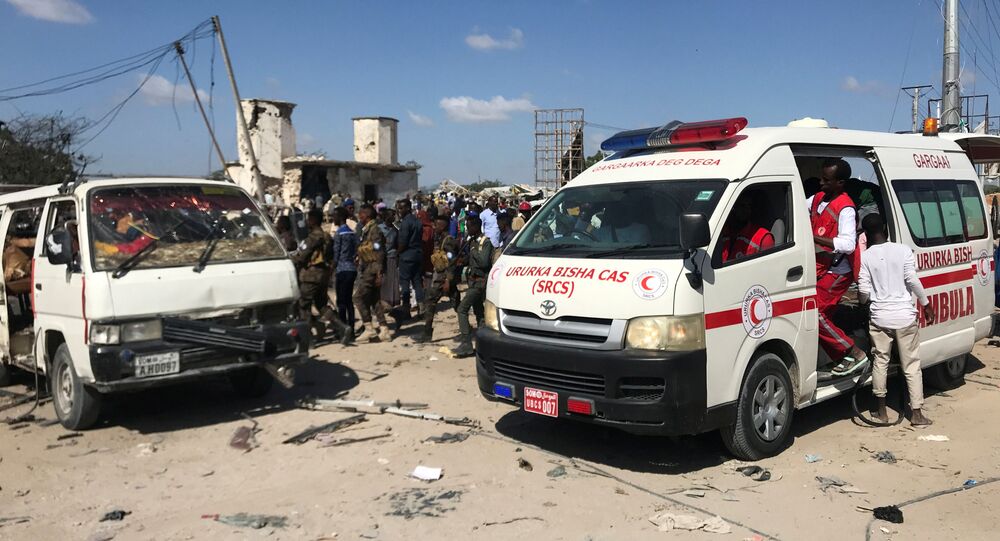 The explosive device reportedly went off in Afgoye, some thirty kilometres outside of the Somali capital, police told Reuters. There are no immediate reports of casualties due to the incident.

A car bomb has exploded on the outskirts of Mogadishu, Somalia, killing four and injuring at least twenty, according to the newspaper Hurriyet.

Law enforcement previously told Reuters that an explosive-laden car rammed into a place where Turkish engineers and Somali police were having lunch.

Police officer Nur Ali from Afgoye, where the incident occurred, was quoted as saying that it was too early to know the number of casualties.

No group has claimed responsibility for the attack so far.

An eyewitness told Reuters that he had heard a huge blast and seen casualties being carried from the scene but he could not make out whether they were dead or wounded.

In the meantime, Somali news portal Garowe Online reported that leading Somali military officials have confirmed that two attacks launched by members of the al-Shabaab radical group (part of al-Qaeda* terrorist organisation) near the capital of Mogadishu were repelled by the army,

In the early hours of Saturday morning, al-Shabaab militants attacked a Somali National Army (SNA) camp in the town of Afgoye, approximately 19 miles southwest of Mogadishu, the portal stated.

"They attacked the town and our forces responded. The fighting lasted a while before our forces defeated them", senior SNA official Osman Aden told the news portal.

Saturday’s attack marked the second consecutive night of clashes between Al-Shabaab and the SNA. According to the portal, the militants launched their first attack in the early hours of Friday morning in a village near the town of Haji Ali, in the Middle Shabelle region. At least 16 al-Shabaab militants were killed in the fighting as the attack was repelled; the portal reported citing military sources.

Gen. Mohamed Ahmed Taredishe, commander of the Somali National Army (SNA)’s 27th battalion, stated that the area was now under full army control, although four soldiers had died in the fighting, the portal reported.

For decades, Somalia has witnessed a bloody conflict between the al-Shabaab terrorist group and the government forces. Al-Shabaab has sworn allegiance to al-Qaeda and has launched attacks domestically and in other African countries.