Earlier in the day, Kenyan Defence Forces (KDF) stated that four members of Somalia’s Islamist group, Al-Shabaab, were killed on Sunday after they attacked a military base in Lamu county used by both US and Kenyan forces.

The United States Africa Command issued a statement on Sunday, saying that "one (1) US service member and two (2) Department of Defense contractors were killed at a Kenya Defense Force Military Base in Manda Bay, Kenya".

According to the statement, two more DoD members who were wounded "are currently in stable condition and being evacuated".

​Earlier in the day, the Somali-based Islamist group, Al-Shabaab - affiliated to al-Qaeda - attacked a military base in Kenya's Lamu county.

​The news comes after a deadly terrorist attack struck Kenya earlier this month, allegedly carried out by Al-Shabaab militants. 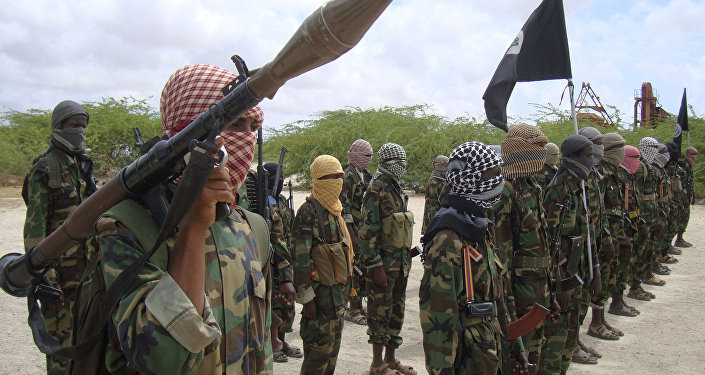 © AP Photo / Farah Abdi Warsameh-FILE
Al Qaeda-Linked Group Claims Responsibility for Attack on US Military Base in Kenya
A bus carrying over 40 passengers, en route to Kenya's second-largest city of Mombasa from the town of Lamu, was attacked by a group of militants who appeared from the forest and tried to stop the bus. When the driver refused to slow down, the assailants fired at the vehicle, killing at least three and leaving many injured.

Washington said that the Pentagon carried out several air raids in the region targeting Al-Shabaab militants following the deadly attacks.