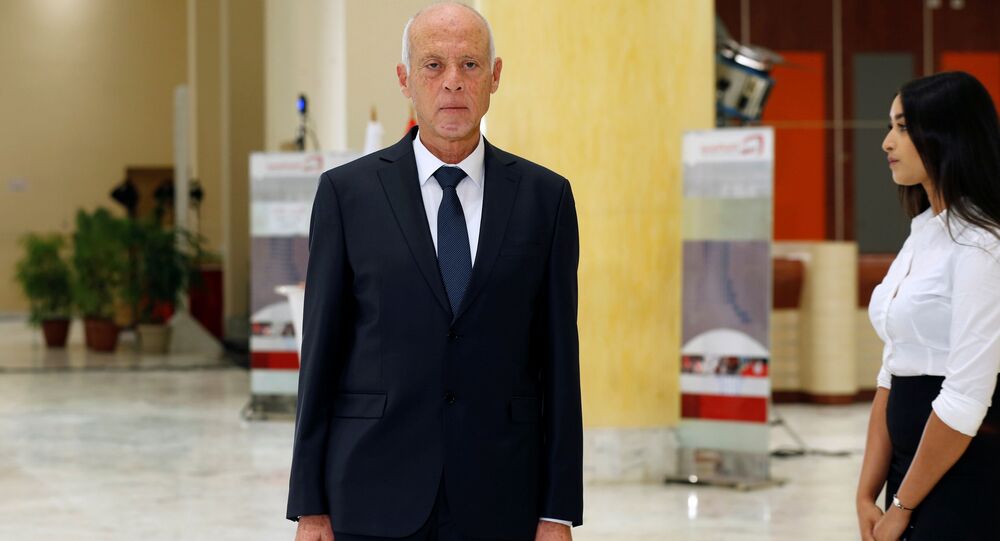 MOSCOW, October 13 (Sputnik) - Tunisia is holding the second round of the presidential election on Sunday. The first round of the vote was held on September 15, but none of the candidates gained the absolute majority needed to win the race.

Saied and media tycoon Nabil Karoui emerged as leaders of the race with 18.4 percent and 15.6 percent of the vote respectively.

According to the 2014 Constitution of Tunisia, the president is the head of state and a symbol of its unity. The implementation of executive power in the country is divided between the president and the government.

The president is elected on the basis of universal direct voting by secret ballot for a term of five years and cannot hold the office for more than two consecutive terms.

The election is announced through a presidential decree, which should be issued no later than three months before the voting day.

The election is scheduled for holidays or weekends. The second round of the presidential election takes place within two weeks after the final results of the first round were announced.

Citizens of Tunisia, who have reached the age of 18 years by the election day, have the right to elect a president of the country. The military and internal security officers (police) cannot vote.

According to the electoral law, voter registration is voluntary.

A person, who is at least 35 years old, holds Tunisian nationality since birth and practices Islam, can run for president.

Presidential candidates who have citizenship of another state have to commit to renouncing the other citizenship if elected.

In order to be nominated, presidential candidates must receive the support of either 10 members of the parliament, or 40 heads of local councils, or 10,000 registered voters living in at least 10 constituencies. Moreover, candidates must collect at least 500 signatures in his/her support in each district.

Presidential candidates are required to deposit 10,000 Tunisian dinars (about $3,500) in the national treasury. The electoral deposit is refunded if the candidate in the presidential election has received more than 3 percent of the votes.

Responsibility for the organisation of the election lies with the Independent High Authority for Elections (ISIE).

The election campaign begins 22 days before the vote and ends 24 hours ahead of the start of the voting. In accordance with the law, campaigning is prohibited in-state, public, private, educational and religious institutions. The law also prohibits the incitement of violence, hatred, fanaticism, and discrimination, as well as the use of national symbols, such as the Tunisian flag or the emblem of the republic, in electoral posters.

Organisers of mass campaigning events must notify the ISIE about them.

If the second round of the election is held, the campaign begins the day after the final results of the first round are announced.

Presidential candidates can use political advertising. The candidates’ election funds may include their own, private and public funds.

In case the country is in a state of emergency, the presidential term of the incumbent head of state may be extended provided a relevant law is passed.

The voting takes place between 8 a.m. and 6 p.m. local time.

Before the voting begins, the chairman of the election commission shows empty ballot boxes to representatives of the candidates.

To receive the ballot, a voter submits a document confirming his or her identity to the election commission. In order to avoid multiple voting, each person has to immerse their index finger in the inkpot after receiving the ballot. A voter marks the ballot in person in a polling booth and puts an "x" sign next to the name of the selected candidate. Then the ballot paper is casted in a ballot box.

If a ballot is damaged, a voter may request another one.

Disabled persons, who cannot check a box in a ballot on their own, have a right to be assisted by their relatives or another voter.

Tunisian citizens living abroad have three days to cast their votes, the last of these days being the election day.

The votes are counted publicly in the presence of observers and representatives of the candidates. After that, all parties sign a protocol, indicating the numbers of locks on the ballot box and the number of voters registered at the polling station. The final protocol is posted at the door of the polling station and a copy is put in the ballot box.

The ISIE may postpone the voting at one or more polling stations if it thinks that it is impossible to hold the election.

The candidate who received an absolute majority of votes is considered elected. If no one gets the necessary majority of votes in the first round, the second round of the election is held within 14 days. Two candidates with the best results in the first round qualify for the runoff. Following the second round, the candidate who received more votes than the opponent becomes president. If their numbers are equal, then preference is given to the oldest candidate.

The elected candidate takes office after taking the oath.

An early presidential election is held in case of the death or resignation of the incumbent president.