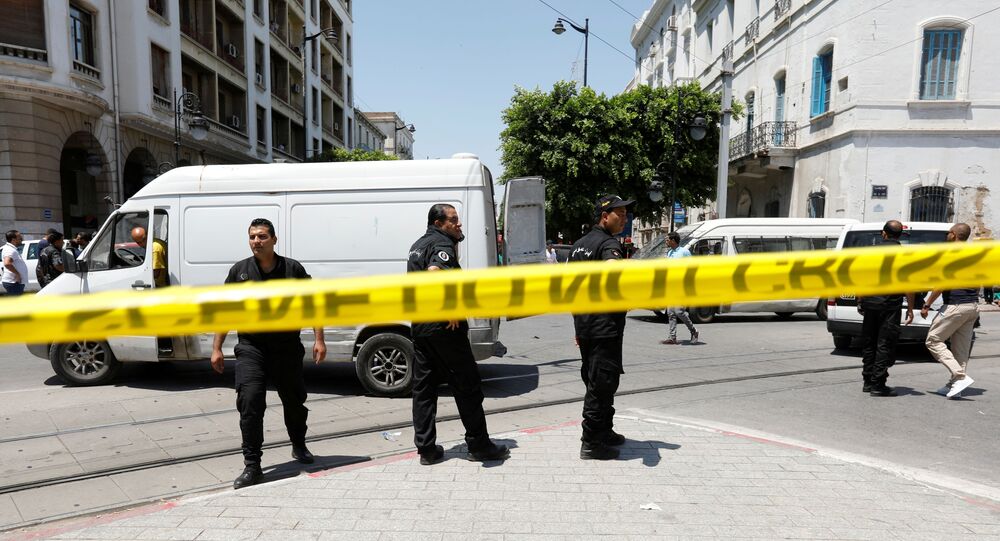 Earlier, two police officers and three civilians were injured in a blast that rocked the Tunisian capital of Tunis on Thursday in the proximity of the French embassy, according to the nation's Interior Ministry. The attack targeted a police car in Charles-de-Gaule street in downtown Tunis.

A second suicide blast has rocked the Tunisian capital on Thursday as a bomber blew himself up near a police station in al-Qarjani district, the Tunisian Interior Ministry reported. At least four people have been wounded as a result of the explosion. One police officer has reportedly succumbed to the injuries he sustained as a result of the blast.

​Earlier, two police officers and three civilians have been wounded as a result of an explosion in the proximity of the French embassy, according to the nation's Interior Ministry.

A presumed “#terrorist” attack in Bab B’har, down town #Tunis , about 100 meters from the #French embassy. pic.twitter.com/TfSsx5AEkm

​According to eyewitness reports, the suicide bomber triggered an explosive device in front of a police car, leaving several people injured.

A video (graphic content which may offend sensibilities) has appeared on Facebook showing Tunisian police and other emergency services dealing with the aftermath of the blast. In the clip, at least one injured person can be seen. ​

FLASH: Suspected suicide bombing targeting a police car in Charles de Gaulle street in downtown Tunis. As per initial reports, suicide bomber was in a vehicle. There are also reports of another suicide bomber lurking in the area. #Tunisia pic.twitter.com/EjFJp7kRIh

Central Tunis has been rocked by suicide blasts a few times in recent years. The country has been struggling with the threat posed by militant groups active in remote areas bordering Algeria ever since the toppling of President Zine Abidine Ben Ali in 2011.

In late October 2018, a female suicide bomber blew herself up near the Municipal Theater on Habib Bourguiba Avenue, the main street of the capital.

Tunisia, which relies heavily on tourism, has beefed up its security measures since a series of attacks in 2015, including the attack on the museum of Bardo where 21 people were killed, and another attack in the resort of Sousse, which killed 38 people.