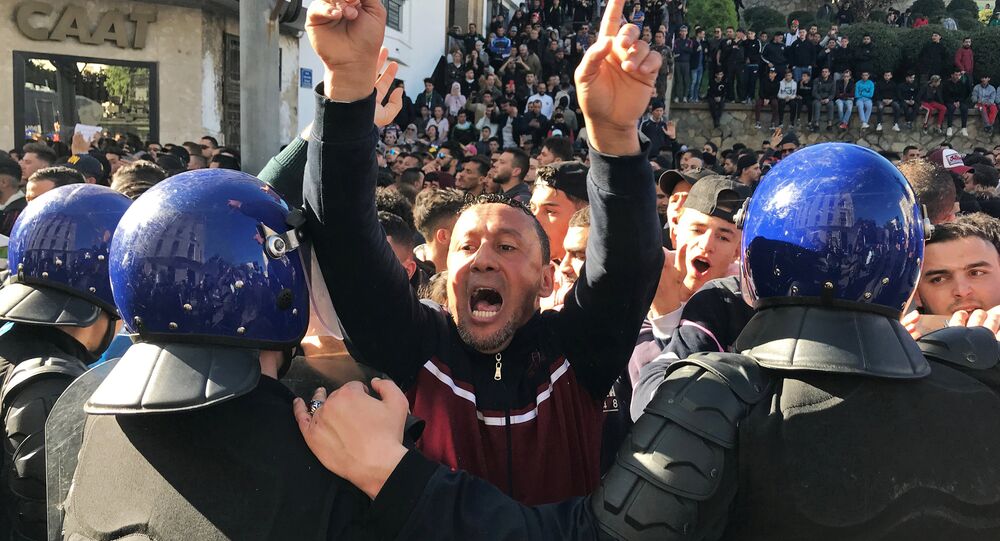 CAIRO (Sputnik) - The Algerian police carried out mass detentions of demonstrators near the capital’s main post office on Friday as the country experiences huge waves of protests for the third month in a row, local media reported.

Securities forces have cordoned off the building, preventing people from approaching it, according to the El Khabar daily. No serious clashes or incidents have ensued.

The El Watan newspaper, meanwhile, reported that the demonstrators had demanded that the 4 July presidential elections be scrapped and warned against installing military rule in the country.

After long-time Algerian President, Abdelaziz Bouteflika resigned in April and his main supporters were removed from power, the Army Chief of Staff Gen. Ahmed Gaid Salah has been considered one of the main figures in the country’s political arena. He, however, denies that the military has any political ambitions.

© Photo : Alhagie Jobe/ Twitter
Algeria's Interim President Promises Free Presidential Election - Reports
Earlier this week, the army chief called for accelerating preparations for the elections, which, he believes, should put an end to the political crisis. He also denounced protesters’ calls to remove all Bouteflika supporters from power as "unreasonable".

An acute political crisis broke out in Algeria in February after then-ailing president Bouteflika announced his bid to seek a fifth term in office, triggering a wave of anti-government protests. On 11 March, Bouteflika withdrew his bid for re-election and postponed the vote, initially scheduled for 18 April. However, protests continued, with people demanding immediate change.

On 2 April, Bouteflika stepped down. The speaker of the country's upper house, Abdelkader Bensalah, in accordance with the country's constitution temporarily replaced the president, and set new presidential elections for 4 July.

Nationwide protests, nevertheless, are still underway, with demonstrators demanding that all politicians who received offices under Bouteflika resign.

Lack of Change in Algeria May Hurt Economy - Lawmaker