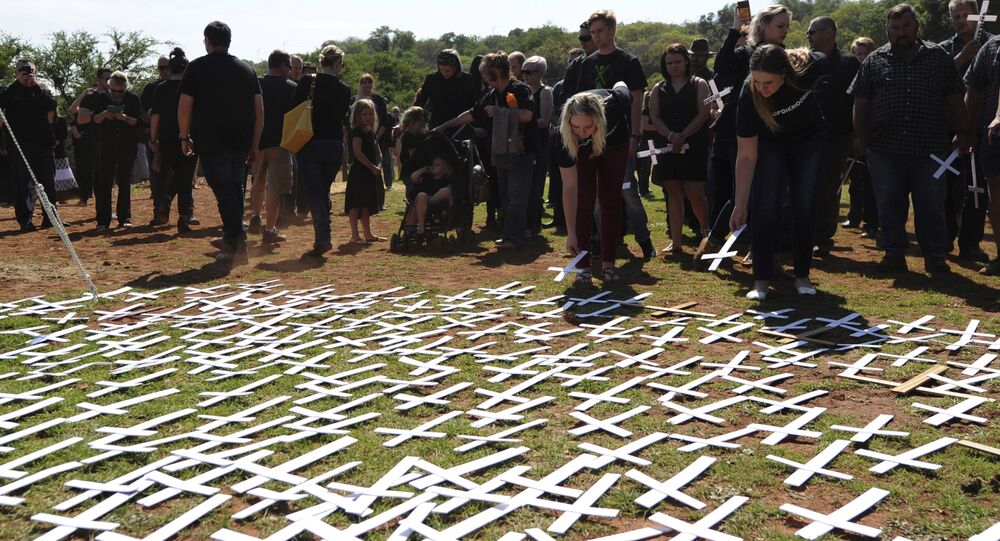 Just days before her tragic death, Annette Kennealy shared an alarming article on her Facebook page about a sudden spike in farm attacks, including fatal ones. Many of them target the country’s white minority, which owns most of the agricultural land in South Africa.

The South African police have detained a 40-year-old man on suspicion of brutally murdering 51-year-old farm attack activist Annette Kennealy, the country’s media reports. According to the news website Netwerk24, the suspect worked for the woman, who was a landowner in Makhado, Limpopo, around 250 kilometres from the country’s capital. She was reportedly murdered earlier this week on her farm.

The woman’s body was discovered by a relative lying in a pool of blood and with several stab wounds, according to police.

"The family members tried to call her without success, until one of them went to investigate. On arrival, he found the deceased inside the house lying in a pool of blood, with multiple stab wounds”, Police spokesperson Colonel Moatshe Ngoepe said, as cited by the outlet.

Ian Cameron, the head of the Community Safety Unit of AfriForum, which champions the rights of the country's Afrikaner minority, reported on his Twitter account that the woman was found with an iron rod around her neck and had been beaten with a hammer.

UPDATE #FarmMurder 21/5/2019: The deceased was found facing downwards with an iron rod around her neck. A hammer was also used by die suspect to kill her and was found on scene. The suspect has been arrested due to tireless work by @SAPoliceService, thank you to the team involved pic.twitter.com/75ZsFd5PKs

“Ms. Kennealy served the DA as a councillor between 2011 and 2014 and will be remembered for her selfless service and her commitment towards human rights…I will remember her for our shared passion of the arts, her sober expression for her love of the country and her love for nature and animals”, the head of the DA branch in Limpopo, Jacques Smalle, stated.

On her social media, Kennealy was vocal in bringing attention to farm murders and some politicians’ calls for violence against the white minority in South Africa. Just days before she was brutally murdered, she shared a link to an article about a reported spike in farm attacks.

The report released by AfriForum earlier revealed that attacks on white South African farmers had skyrocketed by 25 percent in 2018, with assailants using electric drills, blowtorches, and bleach against some victims. AfriForum spokesman Ernst Roets pointed to a "racial element" in the attacks, saying that the number of murders had ebbed to 54 from 72 in 2017, indicating that white farmers had tried to fend off their attackers.

Currently, 73 percent of agricultural estates in South Africa belong to white people, who make up 10 percent of the country's population. South African authorities are working on a legal way to redistribute farmland among black citizens, who comprised three-quarters of the country's total population in 2018. The previous owners will not be compensated for these expropriations. The planned measure was condemned both inside and outside the country, with critics recalling the negative experience of Zimbabwe, where similar measures turned what was once known as the “breadbasket of Africa” into a country that now relies on imports of agricultural products.