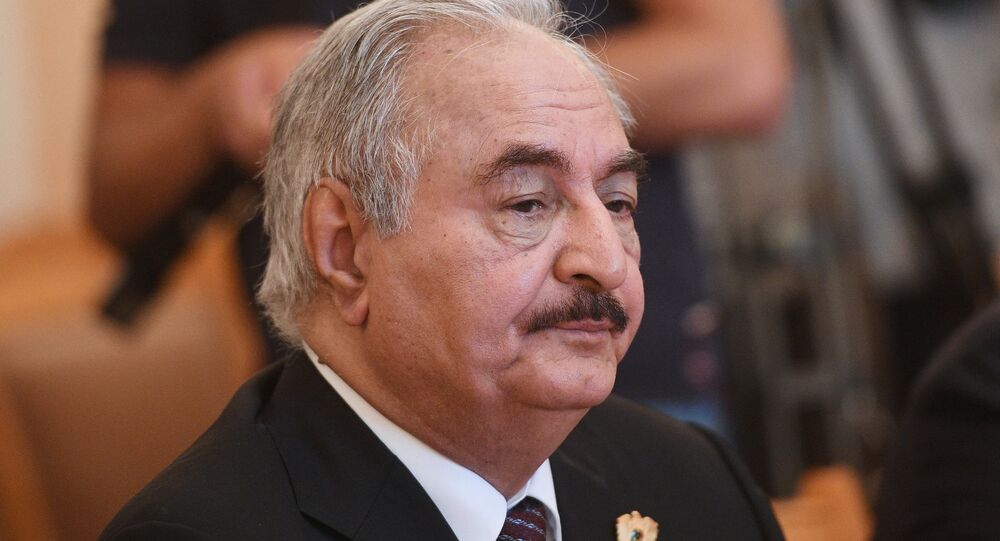 MOSCOW (Sputnik) - Field Marshal Khalifa Haftar, the commander of Libyan National Army (LNA), may yet play a role in the future Libyan government, despite his recent offensive on Tripoli, which is controlled by the UN-backed Government of National Accord (GNA), UK Foreign Secretary Jeremy Hunt said on Tuesday.

The ongoing clashes between the two rival Libyan forces erupted on April 4, when Haftar ordered his troops to advance on Tripoli to free it from what he called terrorists. The LNA has gained control over the nearby cities of Surman and Garyan as a result. The Government of National Accord (GNA) announced a counteroffensive, dubbed Volcano of Rage, on April 7.

"We have to be careful about making those kinds of judgments. We have not covered ourselves in glory with our policy on Libya. Let us face it, if we knew in 2011 we would be in the situation we are now we would be asking ourselves some searching questions, so we had better be careful about ruling people out and ruling people in. The right way forward is a ceasefire, political talks and a political settlement," Hunt told The Guardian newspaper, asked whether the LNA offensive would bar Haftar from the future Libyan government.

"We do not agree with what Haftar is doing. We do not think it is possible for Haftar to achieve a military victory, and as a government he will not be seen as legitimate by whole swathes of the country. So we want a political process," Hunt told the newspaper.

© REUTERS / Stringer
LNA Says Haftar-Led Air Forces Destroyed GNA's Operation Headquarters in Libya
In February 2011, mass rallies demanding the ouster of Muammar Gaddafi, Libya's former leader who had been in power for over 40 years, erupted across the country. The protests later developed into an armed conflict between government forces and rebels.

On March 17 of that year, the UN Security Council adopted a resolution providing for the introduction of a no-fly zone over Libya, paving the way for foreign military intervention in the North African country. An operation conducted by coalition forces — the United Kingdom, France, the United States, Canada, Belgium, Italy, Spain, Denmark and Norway — began two days later. That October, Gaddafi was brutally killed by western-backed militia, and the country has been engulfed in constant political turmoil since then.