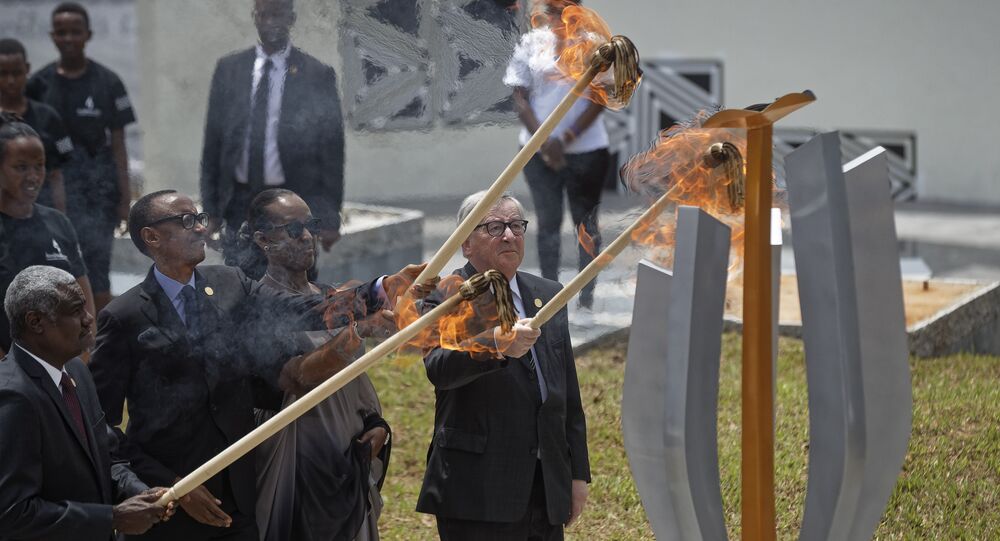 The incident took place at a ceremony dedicated to the commemoration of the Rwandan genocide that left some 800,000 dead.

The president of the European Commission almost hit Jeannette Kagame with a flame-lit torch during the ceremony to commemorate the lives of 800,000 Tutsi and moderate Hutus murdered during the Rwandan genocide.

The viral clip shows Mr Juncker lighting up his torch, next to the President of Rwanda Paul Kagame, his wife and the Chairperson of the African Union Commission Moussa Faki Mahamat, only to almost set the first lady on fire moments later as he turned around.

Juncker's failure to handle the lit stick safely has caused a flood of comments on social media.

The symptoms of sciatica don't include lumbering around like a drunk.

Following the ceremony, Juncker took to Twitter to say he was "moved beyond words at this memorial to tragedy".

I am moved beyond words at this memorial to tragedy. It serves as a bleak warning of the worst humanity is capable of. But through the darkest of days, I remain in awe at the power of regeneration, of this country, and of humankind. #Kwibuka25 pic.twitter.com/0yoll7IoPK

Jeannette Kagame avoided being harmed as she quickly stepped back when Mr Juncker turned around with a blazing torch in his hand.

The fire set to burn at the ceremony is meant to last for 100 days in commemoration of the 25th anniversary of a genocide that saw extremist ethnic Hutus slaughter more than 800,000 Tutsis and moderate Hutus over three months.