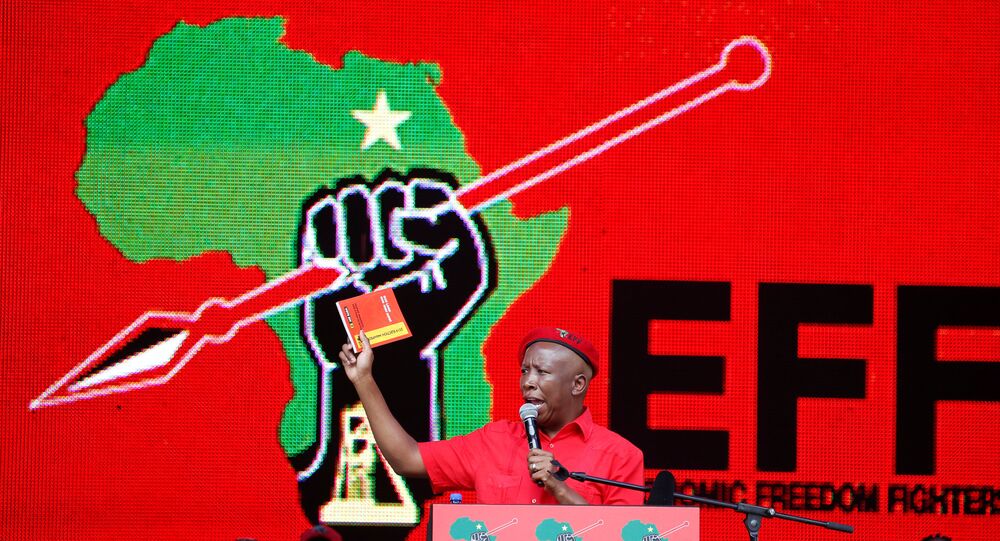 South African politician Julius Malema has caused a controversy shortly after approval of a National Action Plan against racism, stating he doesn’t want white people to be killed, noting though he would just prefer it if they worked for blacks.

“I don’t want blacks to work for whites. I want you to work for yourselves and white people will work for you. That will be true freedom", said Malema, President of the leftist Economic Freedom Fighters (EFF), South Africa’s third largest political party.

He has twice been sued over inciting hate and violence against whites, prompting his expulsion from the African National Congress back in 2012, and shortly thereafter he and allies founded the EFF party.

Notably, one of those who expressed dissatisfaction over Malema’s rhetoric is among others Andile Mngxitama, president of the Black First Land First Party, suggesting that the stance is too ambiguous and not clear-cut enough.

“Our Parliament, while it looks black, is controlled by white money and can’t make laws to serve our interest. Why?” – he asked emotionally  appearing in a talk show on RT, adding further:

“We want to end the system which is constructed today of white people on top, oppressing and exploiting black people".

“We construct a new society which takes care of black people without oppressing white people. In fact, white people can even leave if they want to!” Mngxitama argued. Under the current system, however, “I own nothing… We can’t even make laws that say we must take the land".

He went on to debunk the widely-covered illusion of “a white supremacist system” in the country, contending that it is by far “not a white-dominated system". To illustrate the point he brought up so-called black economic empowerment and preferred placement in universities: “The idea they are forced into lower positions is ridiculous", Notelovitz claimed.

Many Twitter users are equally outraged by Malema’s stance, suggesting that if one votes for the EFF in this year’s election, the country will instantly “grow mean, black racist and lawless".

The racial debate has long since moved online, with Twitterians increasingly posting videos and pictures on leadership, the distribution of power in South African society and other related questions, attracting an array of comments from both whites and blacks.

One of the latest viral videos on the subject was posted by the EFF showing two black women standing by a rubbish bin, throwing papers out of it that a white teenager has just discarded there, prompting him to return and do it again and again.

RED HANDED! This clip sums up change in @EFFSouthAfrica since last election. @julius_s_malema @floyshivambu and @AdvDali_Mpofu encouraging a mean, racist, lawless narrative. Hope it doesn’t catch on, for all our sakes pic.twitter.com/RYePt3wt7s

Twitterians virtually flooded the comments section, with reactions raging from thumbs-up from black “revolutionaries” and Malema supporters to utmost fury over black racism. While some opted to advise the white kid to act more decisively:

Unfortunately I don't subscribe to toxic nationalism and don't recognise monarchs therefore I don't believe in Kings as symbols of authority but this was used as a metarphore to celebrate the bravery of this young kid.

There is difference between bravery and seeking attention.

I would respect him more if he would tell these two woman to cut it out. Being a Charlie Brown doesn't do much in the end. Correcting them is where the true courage is.

He kept his cool. Good for him

Some outraged Twitterians demanded that the black individuals in the video have a “disciplinary hearing” and apologise to the white teenager, instantly receiving support from other commenters, including blacks:

That was very wrong & especially since EFF is doing so many great things, that will taint the EFF’s name. That was just very wrong, unacceptable nje.

Why is the EFF body doing this @Julius_S_Malema @EFF please explain to us WHY? pic.twitter.com/2PQc6mgqwa