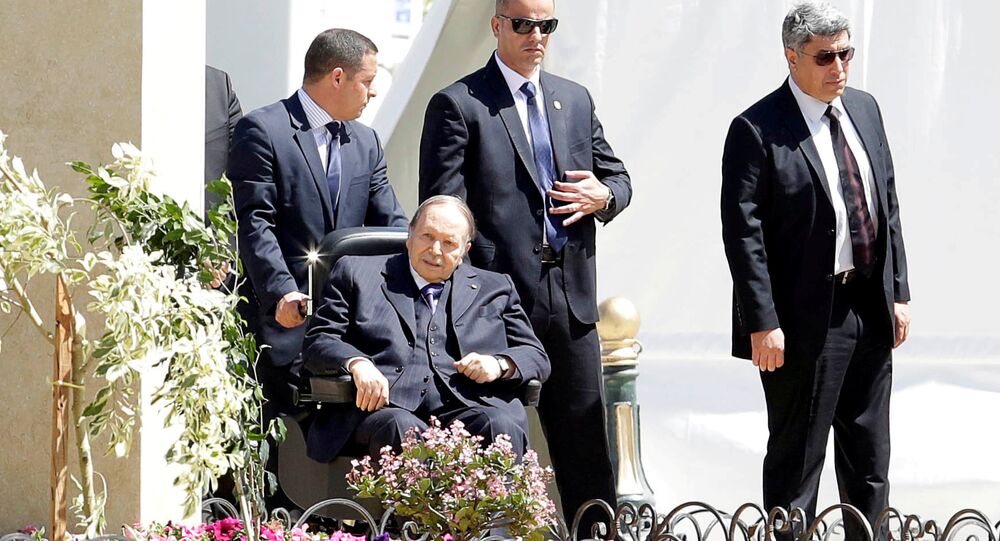 CAIRO (Sputnik) - Algerian President Abdelaziz Bouteflika, who intends to run for a fifth consecutive term, plans to promise to hold a new snap presidential election within a year in case he is elected, while he will not run in this snap election, local media reported on Sunday, citing the head of Bouteflika's election campaign team.

According to the El Khabar daily newspaper, Transport Minister Abdelghani Zaalene, who replaced former prime minister Abdelmalek Sellal as the head of Bouteflika's campaign team, said this right after submitting official papers, confirming that Bouteflika would seek re-election next month, to the Constitutional Court.

Meanwhile, Algerian opposition politician Ali Benflis, who headed the government between 2000 and 2003, gave up on his bid, claiming that the "existing political situation" did not let him run for presidency.

© AFP 2021 / FAROUK BATICHE
Thousands of Students in Algeria Protest President’s Reelection Bid
Media reports emerged Saturday that 82-year-old Bouteflika is in a hospital in Geneva, with his condition assessed as critical. He is reportedly still undergoing treatment.

Bouteflika announced that he would seek yet another presidency in February, sparking mass protests across the country, which have left over 180 people injured, according to the Health Ministry.

Bouteflika suffered a stroke in 2013 and has since then been wheelchair-bound, rarely making public appearances. Bouteflika has been ruling the country since 1999.