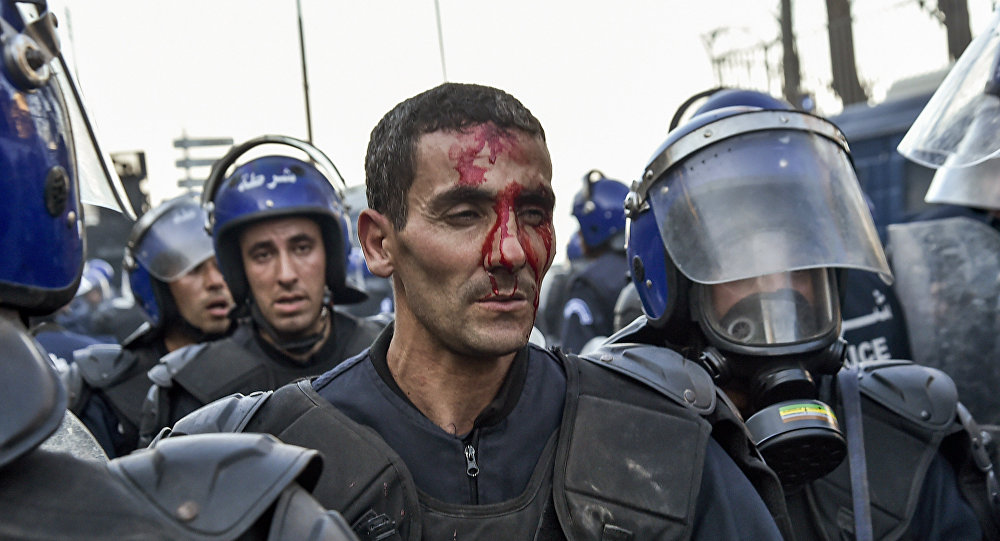 As Algeria’s long-time president Abdelaziz Bouteflika is expected to submit a formal application to run for a fifth term on Sunday, people around the country have mobilised to protest his bid.

Tens of thousands of Algerians have taken to the streets across the country to protest against what they claim is 81-year-old President Abdelaziz Bouteflika’s intention to run for a fifth term. The demonstrations have already been dubbed the biggest protests since the Arab spring, with photos and videos from the gathering circulating on social media.

Initially, many netizens pointed out that the Friday protest was peaceful, and riot police stayed out of it, smiling at passers-by, who chanted “peaceful, we’re brothers”, while mainstream media only reported that the protests have turned violent:

🇩🇿Algeria: demonstrators chanting "peaceful, we're brothers" and passing by anti-riot police who are smiling. The Algerian system clearly avoiding escalating what could become an explosive situation — learning from past mistakes #حراك_1_مارس pic.twitter.com/Ykb17zo5Zo

Algeria: Police and the Gendarmerie were clearly told to stay clear of the demonstrators today, and they did almost all over the country. #حراك_1_مارس pic.twitter.com/N94SzrxE2L

THE POLICE IS THE PEOPLE

In today's protests, the police forces show their solidarity to the common cause for freedom and social justice.

Shortly after that, some media outlets reported that law enforcement officers had used tear gas to disperse a group of about 200 young people, who hurled stones at police around 1.5 km from the presidential palace in Algiers.

TWEET: “Yes, it was ugly for the end of a wonderful day. The youths were peaceful until they were showered with tear gas”.

TWEET: “#Algeria Violent clashes erupted between protesters and police near the presidential palace during a massive anti-government demonstration in #Algeria. The use of tear gas was reported”.

According to the Algerian new outlet En-Nahar, citing the country's General Directorate of National Security, 56 police officers and at least 10 demonstrators were injured in the unrest, with 45 arrests made in the Algerian capital.

Bouteflika, who suffered a stroke in 2013 and has rarely been seen in public since, announced his plan to seek another presidential term on 10 February, triggering a wave of nationwide protests. Since he is expected to submit a formal application to stand in the April election on Sunday, another string of protests may be expected over this weekend.