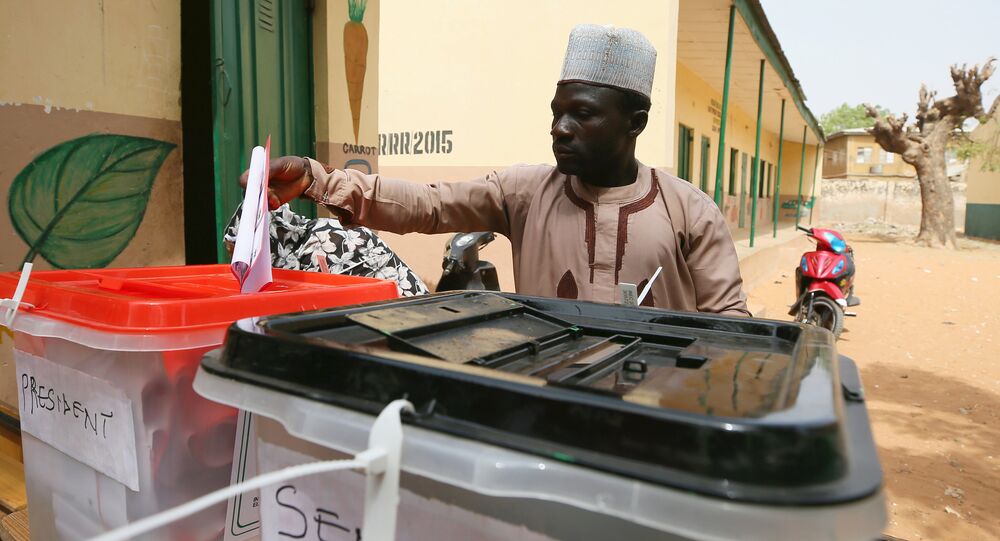 MOSCOW (Sputnik) - As many as 128 people have been arrested for suspected election-related offences in Nigeria, the country's Police Force said a day after the presidential and parliamentary elections.

"Meanwhile, a total of One Hundred and Twenty Eight (128) Persons were arrested across the country for various electoral offences ranging from homicide-related crimes, vote trading, ballot box snatching, impersonation, malicious damage, amongst others," the police wrote on Twitter on Sunday.

© REUTERS / Afolabi Sotunde
Start of Nigerian General Vote Delayed in Some Parts of Country - Opposition
The police added that they had recovered 38 pieces of weapons and a cache of explosives.

According to the police, all incidents will be investigated and people found culpable will be held to account. The police also pledged to focus on ensuring security of collation centers and "other vulnerable points."

Nigerians went to the polls on Saturday to elect a new president, vice president and members of the bicameral National Assembly. Due to various delays, the voting continued in some regions on Sunday.

The official results have not been announced yet, with the Independent National Electoral Commission urging people to disregard any "result" seen on social media platforms.

Among over 70 candidates running for president this year, the front-runners are incumbent Muhammadu Buhari of the ruling All Progressives Congress (APC) and his main challenger, Atiku Abubakar of the opposition People's Democratic Party (PDP).