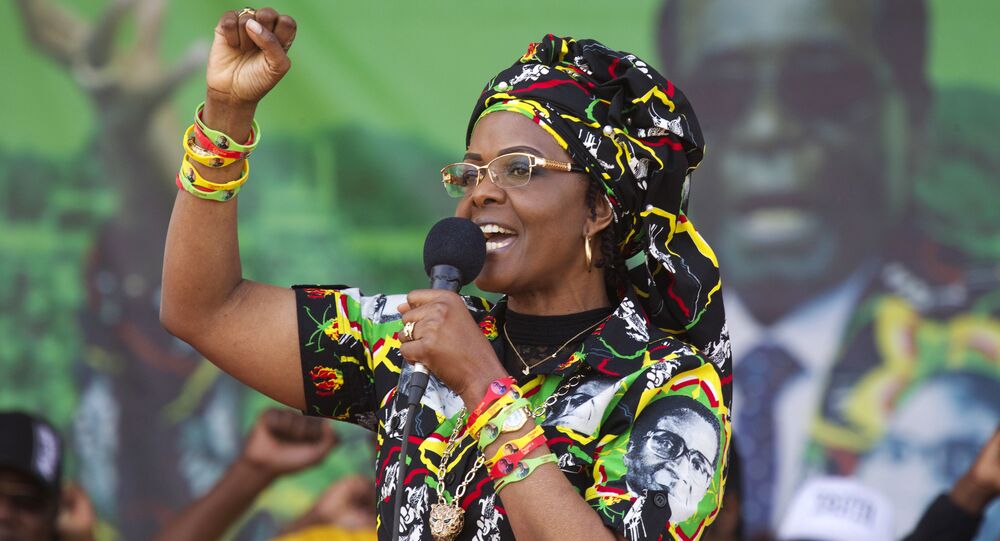 The assault allegedly occurred in 2017 and involved Mugabe beating Engels with an electrical extension cord. Mugabe herself, however, denies these allegations, claiming instead that it was the model who attacked her with a knife.

South African authorities issued an arrest warrant for Grace Mugabe, the former first lady of Zimbabwe, who allegedly assaulted a model named Gabriella Engels in Johannesburg a year ago while the latter was partying in a hotel with Mugabe’s sons.

According to The Guardian, the model claimed that Mugabe beat the “hell out” of her using an electrical extension cord.

© AP Photo / Themba Hadebe
South Africa Tensions Boil as Group Calls on Blacks to Kill White Men, Women, Children, Dogs and Cats
While the government of South Africa initially granted Mugabe diplomatic immunity after these allegations were made public in August 2017, this decision was overturned when Engels challenged it in court.

Mugabe, however, denied assaulting Engels, insisting instead that the “intoxicated and unhinged” model attacked her with a knife when Mugabe arrived at the hotel to check up on her sons.

"I can confirm that a warrant for the arrest of Grace Mugabe was issued last Thursday", Vishnu Naidoo, a spokesman for South Africa’s police service, said, adding that the cops seek Interpol’s assistance in order to enforce the warrant.

Prior to his announcement, the Randburg Magistrates court in Gauteng province issued an arrest warrant for Grace Mugabe on December 13, charging her with "assault causing grievous bodily harm", according to CNN-News18.

The Zimbabwean authorities and Mugabe herself did not immediately comment on this development, so it remains unclear whether Harare would assist Johannesburg with possible extradition requests.