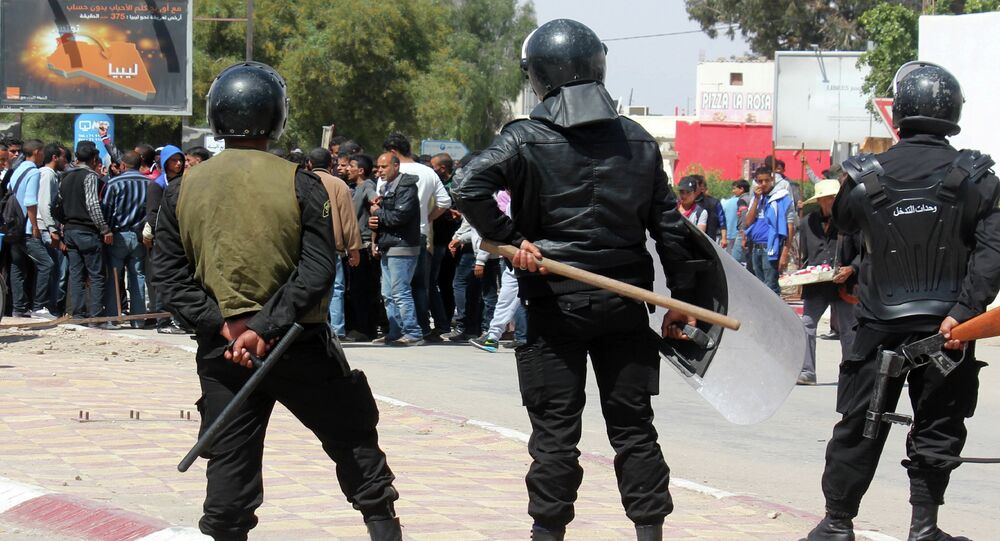 CAIRO (Sputnik) - A Tunisian "red vests" protest movement, whose creation was inspired by "yellow vests" demonstrations in France, has put forward its demands to the country's government, the Asharq Al-Awsat newspaper reported.

According to the newspaper Asharq Al-Awsat, activists wearing red vests held a press conference in Tunis, declaring their readiness to lead peaceful protests in the North African country.

One of the organisers of the rallies, Naguib al-Dereidi, said the protesters had 22 economic and social demands, adding that the "red vests" had called for peaceful protests, and opposed anarchy and unrest.

The demands include improvement in the standard of living in the country, health care, education and public transport reforms, increase of minimum wage and pensions, repair of roads and infrastructure facilities, and bringing corrupt officials to justice, the publication noted.

© AFP 2020 / Remy Gabalda
LIVE UPDATES: French Police Use Tear Gas on 5th Week of Yellow Vests' Protests (PHOTO, VIDEO)
Another activist, Riyadh Jrad, stressed that the "red vests" were not related to any political parties or organisations and were not funded by businesses. He acknowledged that the activists in Tunisia were inspired by the experience of protesters in France and decided to put forward their demands to the Tunisian authorities, including those related to a price increase.

The wave of the so-called yellow vest protests — named after the obligatory attribute of French drivers — started in France in mid-November. The French government has scrapped its planned hike in diesel taxes that sparked the protests, but the yellow vests have since morphed into a broader movement against government policies and rising living costs. The rallies have been marked by violent clashes with police officers, who have used tear gas and rubber bullets against the protesters.