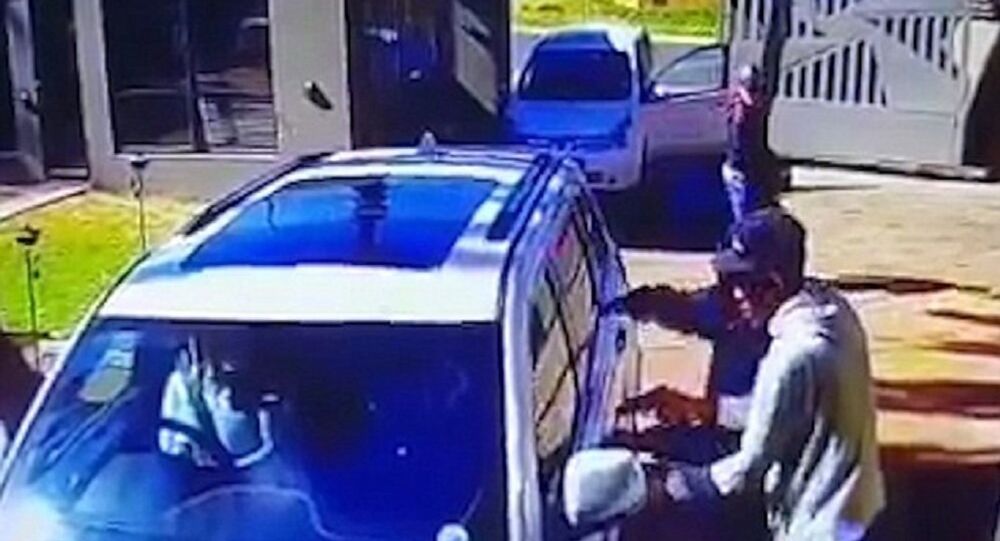 Little old ladies might usually be seen as easy prey for armed robbers, but one South African grandmother recently managed to go 'old school' on three would-be hijackers. The trio apparently picked on the wrong little old lady to mess with; she fought them off and forced them to flee with a couple of moves usually only seen in action movies.

CCTV footage showed an unbelievable incident, in which an unidentified brave grandmother confronts a bunch of armed hijackers in Gauteng province, South Africa.

In a video posted on Twitter, the woman can be seen unwittingly driving her Jeep Grand Cherokee into a fenced yard before another car quickly parks up behind hers and blocks the driveway. Three hijackers then run over and point pistols at the woman through the side windows while struggling to unblock the doors.

The driver, referred to as 'ouma' (grandmother) by one of the women who discussed the footage in Afrikaans, then uncompromisingly throws her SUV into reverse, ramming the getaway car in her escape. The thugs can be seen jumping into their vehicle and trying to escape in fear while the gran crashes into it again.

Gran theft auto: Grandmother defies hijackers aiming guns at her head and RAMS their vehicle as they try to steal her car in #SouthAfrica#GrandTheftAuto https://t.co/Os1r7RfXX6 pic.twitter.com/o8LyeMhozB

While on the road, the brave ouma drives over the rear wing of the car before the unfortunate robbers reverse off up the road and flee the scene.

Get to the Choppa! French Robber Busts Out of Prison in Epic Helicopter Escape