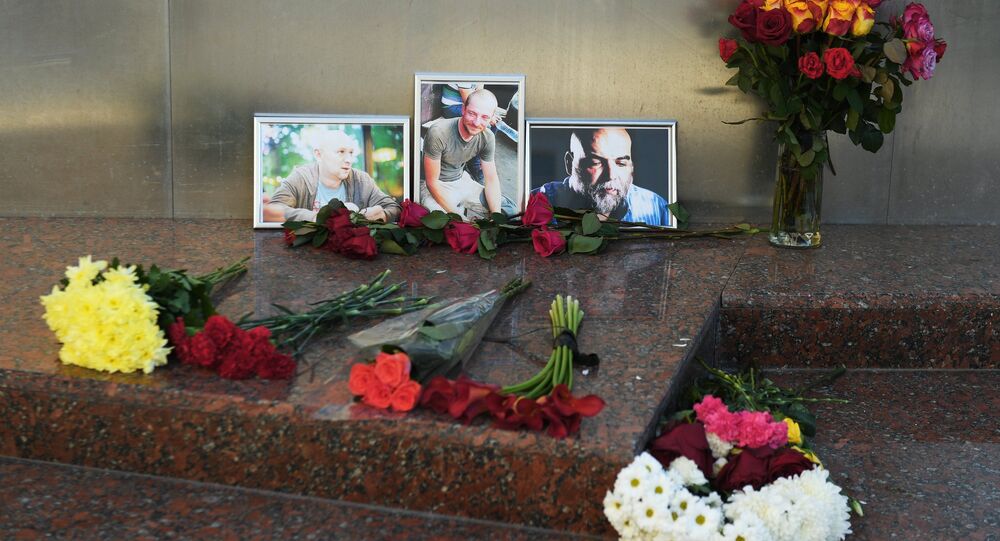 Earlier, the Russian Investigative Committee said that it had opened a criminal probe into the murder of the three Russian journalists in the Central African Republic.

Russia's Foreign Ministry spokeswoman Maria Zakharova stated that doctors had found only gunshot wounds and no signs of torture on the bodies of journalist Orkhan Dzhemal, cameraman Kirill Radchenko and producer Alexander Rastorguyev who were killed near the city of Sibut, 23 kilometers (14 miles) north of Bangui, the capital of the Central African Republic (CAR), earlier this week.

The statement came after Russian forensic expert Sergei Myatyugin told Sputnik that the analysis of the alleged photos of Orkhan Dzhemal and Alexander Rastorguyev published by several African news websites shows that there are visible traces of torture on the bodies of the victims.

"The Investigative Committee has been interrogating Anastasia Gorshkova, the TsUR deputy chief editor, for three hours. She is a witness in the murder case of journalists Orkhan Dzhemal, Aleksandr Rastorguyev and Kirill Radchenko, who were shooting a film about Russian participation in the Central African Republic's conflict," Konyakhin said.

Earlier, Russia's Foreign Ministry confirmed the death of Dzhemal, Radchenko and Rastorguyev, adding that the Russian embassy in the CAR was not informed about the presence of the Russian journalists in the country.

The Ministry added that the embassy is in contact with the local authorities to prepare the transportation of the bodies of the journalists to Russia.

On Tuesday, the news agency AFP cited sources as saying that the bodies of three Russian citizens with expired press cards had been found on a road near Sibut and that they "were killed by unidentified armed men." The information was later confirmed by a UN mission in the CAR.

The Russian Foreign Ministry's consular department website has meanwhile warned against visiting the CAR, where law enforcement forces "are, in fact, not functioning and one cannot count on their assistance in case of trouble."

The Ministry noted that security situation in the CAR remains complicated, citing regular armed robberies, killings and attacks on foreigners.

"So visiting the CAR is fraught with a lot of risks and is highly undesirable," the Ministry added.

© AFP 2021 / Florent Vergnes
HRW Urges Immediate Probe Into 'Strange' Death of Russian Journalists in CAR
Over the past few years, violent clashes between Christian and Muslim groups have been showing no signs of ceasing in the CAR.

The situation was exacerbated even further following the overthrow of President Francois Bozize and the arrival of self-proclaimed head of state Michel Djotodia.

More than one thousand people have already been killed in the conflict, which has displaced one million more, according to UN estimates.