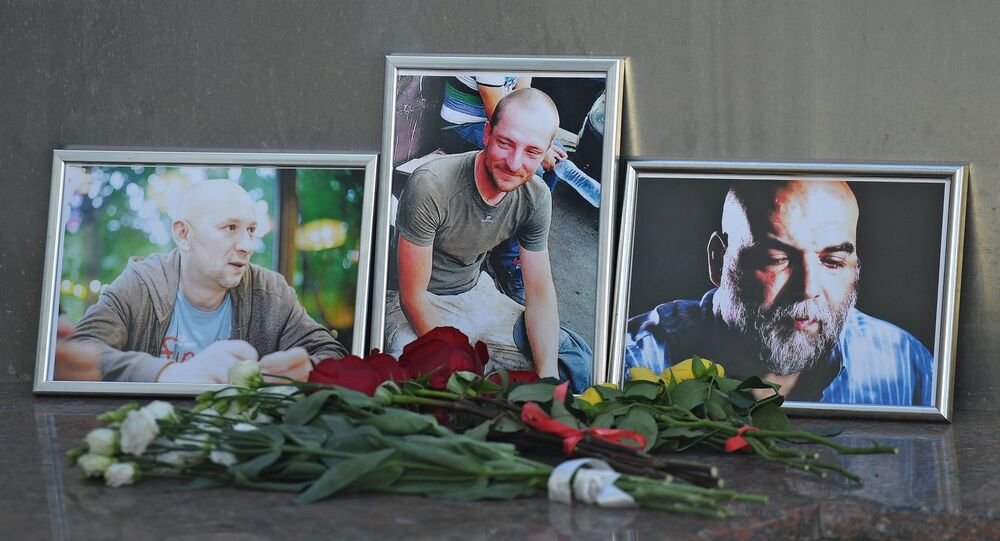 "At present, the investigation of the bodies has been completed, and we are preparing to return the bodies to Russia, which is scheduled for August 4. We are in constant contact with the families of the deceased colleagues and provide them with the necessary assistance," the Investigation Management Center (IMC) said in a statement.

According to the statement, the IMC, together with a number of international organizations, is conducting its own investigation to find out all the circumstances of the tragedy and identify the perpetrators of the attack

Meanwhile, Law enforcers of the Central African Republic (CAR) have been sent to the scene of the murder of the Russian journalists, the mission will work there for three days, Russian Foreign Ministry spokeswoman Maria Zakharova said Wednesday.

© AP Photo / Jerome Delay
MINUSCA: Goal of Attack on Russian Journalists in CAR 'Has Not Been Established'
​On Tuesday, the Russian Foreign Ministry confirmed that three people were killed near the CAR's city of Sibut. Journalistic documents issued for Russian nationals Kirill Radchenko, Alexander Rastorguyev and Orkhan Dzhemal were found with the bodies.

"There are two criminal probes underway — in Russia and in the CAR. Today, a CAR law enforcement mission was sent once again to the place where the corpses were found. It will be working for three days… We have received all assurances by the CAR that everything will be done to clarify the circumstances of the death, to find the criminals and to punish them," Zakharova said as broadcast by Rossiya-1 TV channel.

A number of African media outlets issued two photos that, according to Russian journalist Maxim Shevchenko and head of Russian opposition's MBKh Media Veronika Kutsylo, may show the bodies of Russian journalists Alexander Rastorguyev and Orkhan Dzhemal killed in the Central African Republic. A forensics analyst told Sputnik that there were signs of torture depicted on one of the photos.

Faces of the people from the second photo are not visible. Shevchenko confirmed to Sputnik that his close friend Dzehmal was on one of the photos. Kutsylo said that the two people from the photos looked like Rastorguyev and Dzhemal.

© AFP 2020 / Florent Vergnes
What We Know About the 3 Russian Journalists Killed in Central African Republic
Experts told Sputnik that the website Palmarescentrafrique.com, which publiched one of the photos, was not known to them. The possible owner of the portal did not answer Sputnik's questions about authors of the photos, their authenticity, identity of the people from the photos and the date when the photos were made. The outlet reported, citing unnamed sources, that the journalists had been interrogated before their death.

Forensics expert Sergei Myatyugin told Sputnik the he studied the photos and found signs of torture there. "If we trust these photos, one can really see signs of torture on the bodies found in the Central African Republic. There are several cuts especially visible on the second photo," Myatyugin said.

He also paid attention to several unusual wounds, which may indicate the use of small-caliber arms, and lack of blood shown on the photos.

© AP Photo / Jerome Delay
Things to Know About the Russian Mission in Central African Republic
However, the spokesman for the UN Multidimensional Integrated Stabilization Mission in the CAR (MINUSCA) told Sputnik on Wednesday that allegations of torture of the Russian journalists were pure speculations until the murder investigation is completed.

“To answer the question whether the Russian journalists were subjected to torture, we must wait and see the results of the forensic analysis. The CAR police and the MINUSCA are jointly working on the probe into this serious incident. The investigation is underway, and all talks about whether the torture took place or not would be speculation,”  Vladimir Monteiro said.

'All Guys Had a Huge Experience in Military Journalism' — IMC

"During the preparation for the trip, security issues were discussed with a UN staff member, the safest routes were also discussed with him," the Investigation Management Center (IMC) said in a statement.

According to the statement, the IMC editorial staff as well as Kirill Radchenko, Alexander Rastorguev and Orkhan Dzhemal we involved in preparation for the assignment in the CAR.

We offer our heartfelt condolences to the families and colleagues of Orkhan Dzhemal, Alexander Rastorguyev and Kirill Radchenko. Journalists play a vital role by asking important questions, and they deserve protection wherever they work. pic.twitter.com/03iM72pnFb

© AFP 2020 / Florent Vergnes
HRW Urges Immediate Probe Into 'Strange' Death of Russian Journalists in CAR
"All the guys had a huge experience in military journalism, and, of course, security problems were among the priority during the planning," the statement said.

The sectarian conflict in the African country deteriorated in March 2013, when the Muslim Seleka rebels seized control of the capital and overthrew then-President Francois Bozize, provoking a backlash from Christian anti-Balaka militia. According to the United Nations estimates, over 1,000 people were killed in the conflict.