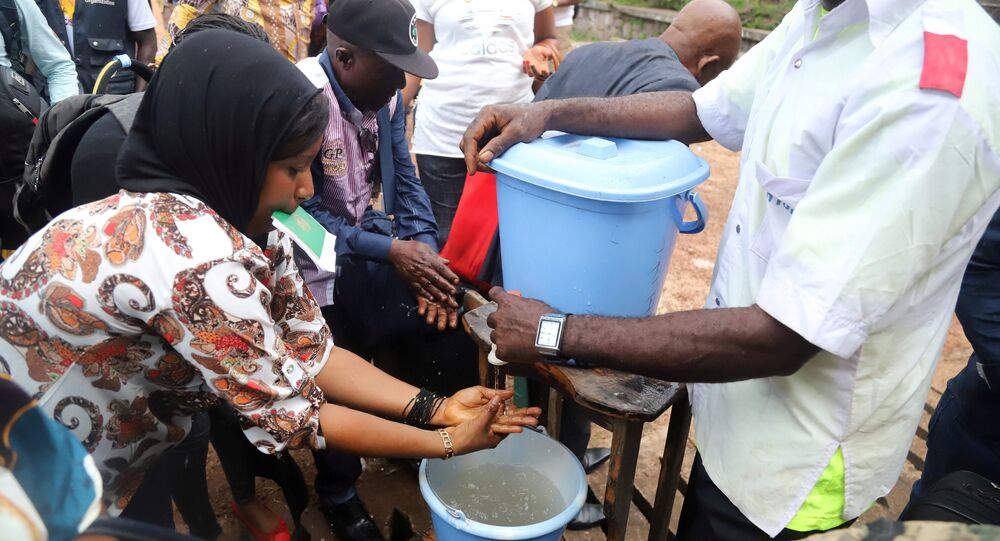 MOSCOW (Sputnik) - The number of people now confirmed to be infected with the Ebola virus disease (EVD) in the Democratic Republic of Congo (DR Congo) has risen to 28, media reported on Tuesday, citing the country's Ministry of Public Health.

According to the Actualite.cd news portal, a total of 51 EVD cases were reported in the region, of which 28 were confirmed, 21 were probable and two were suspected. At least one lethal case was confirmed in the Wangata community in Mbandaka, the capital of the Equateur province.

Meanwhile, the International Federation of the Red Cross (IFRC) has launched an international appeal for $1.6 million to support the ongoing work of the organization in Congo.

© AFP 2020 / Carl de Souza
Three New Ebola Cases Confirmed by Congo Health Ministry as Outbreak Spreads
According to the statement, the IFRC requires additional investment from international partners in a local capacity to inform people about the outbreak and precautionary measures, as well as provide humanitarian aid.

Dr. Fatoumata Nafo-Traore, the organization’s regional director for Africa, highlighted that the IFRC prioritized its emergency response to the EVD outbreak with the provision of burials.

"Our emergency operation includes a major focus on safe and dignified burials. This was a critical intervention in West Africa where it prevented as many as 10,000 additional cases," Nafo-Traore said.

© AP Photo / Abbas Dulleh
EU to Dispatch Urgent Humanitarian Aid to Contain Ebola Outbreak in DR Congo – Statement
Earlier this month, the World Health Organization (WHO) declared a new Ebola outbreak in the Democratic Republic of Congo. On Thursday, the organization said that five new cases had been registered in the city of Mbandaka, which has a population of approximately 1.5 million people. On Monday, the WHO said that it had delivered over 7,500 dozes of the Ebola vaccine to the outbreak-stricken country.

The Ebola virus is transmitted to humans from animals and is estimated by the WHO to have a 50-percent fatality rate. The DR Congo's latest EVD outbreak was in July-November 2014. This was the country's seventh outbreak. According to the information provided by the WHO, during the 2014 epidemic, a total of 66 EVD cases were registered, and as many as 49 cases resulted in death.