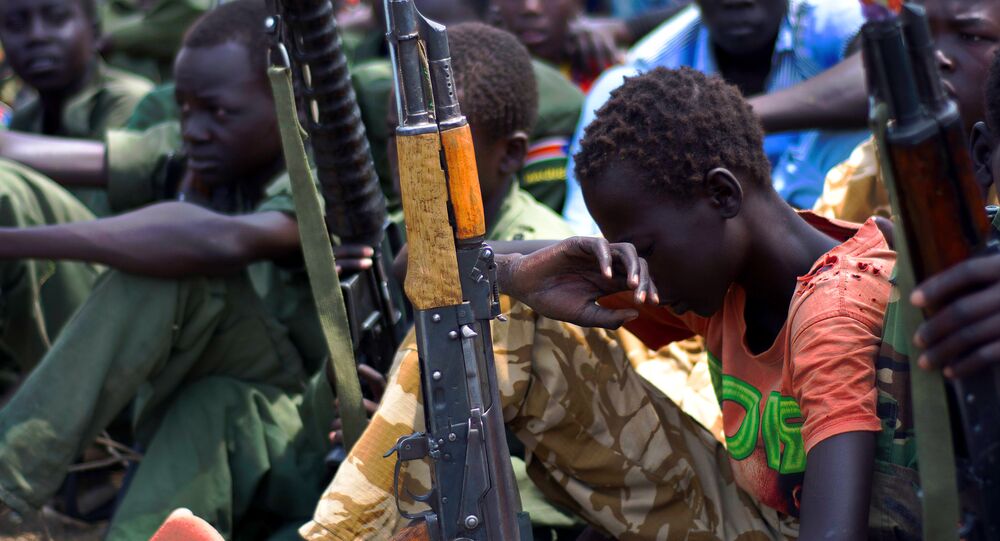 More than 300 former child soldiers in South Sudan have been returned to regular society after spending time in a UN rehabilitation program meant to help children who were conscripted into militant groups to reintegrate.

The United Nations Mission in South Sudan (UNMISS) reported that 311 children were freed: 224 boys and 87 girls. "This is the first time so many young women have been involved in a release like this in South Sudan," said UNMISS head David Shearer in the statement.

"They will have endured suffering, including sexual abuse. It is vital that they receive the support they need to rejoin their communities and that they are welcomed home by family and friends without any sense of stigma."

During the ceremony, the children were symbolically disarmed and given civilian clothing. They will later undergo medical screening and psychological counseling.

An additional 389 children remain in the program, still undergoing rehabilitation. In the past, almost 2,000 child soldiers have been rehabilitated and released — more than 10 percent of whom were under 13 years old.

"Children should not be carrying guns and killing each other. They should be playing, learning, having fun with friends, protected and cherished by the adults around them," Shearer said.

The children were rescued from the Yambio region, the epicenter of fighting in the South Sudanese Civil War that has raged since late 2013, leading to tens of thousands of casualties and over 3.6 million people displaced.

The UNMISS maintains a peacekeeping force in the country to protect civilians and since 2016 has partnered with United Nations Children's Fund (UNICEF) to help bring children out of the conflict.

"Not all children are forcibly recruited. Many joined armed groups because they feel they had no other option," said UNICEF's South Sudan representative Mahimbo Mdoe in a statement.

The war is being fought between the government of President Salva Kiir and the Sudan People's Liberation Movement-in-Opposition (SPLM-IO) led by former Vice President Riek Machar. The two men were the leaders of the young country when it seceded from Sudan in 2011, but in 2013 Kiir accused Machar and other leaders of planning a coup and dismissed them.

Machar denied the coup and accused Kiir of making dictatorial moves. Soon fighting broke out between the two mens' supporters.

Since the conflict began, 17,000 child soldiers have been conscripted into the conflict, UNICEF reported in March 2017. Both sides signed agreements with the UN to end the use of child soldiers, but as with numerous other peace agreements, neither side has shown itself eager to comply. Many child soldiers remain active throughout the country.

"The continued recruitment and use of children by the military and opposing armed groups points to the utter impunity that reigns in South Sudan and the terrible cost of this war on children," Mausi Segun, Africa director at Human Rights Watch, said in a new report.