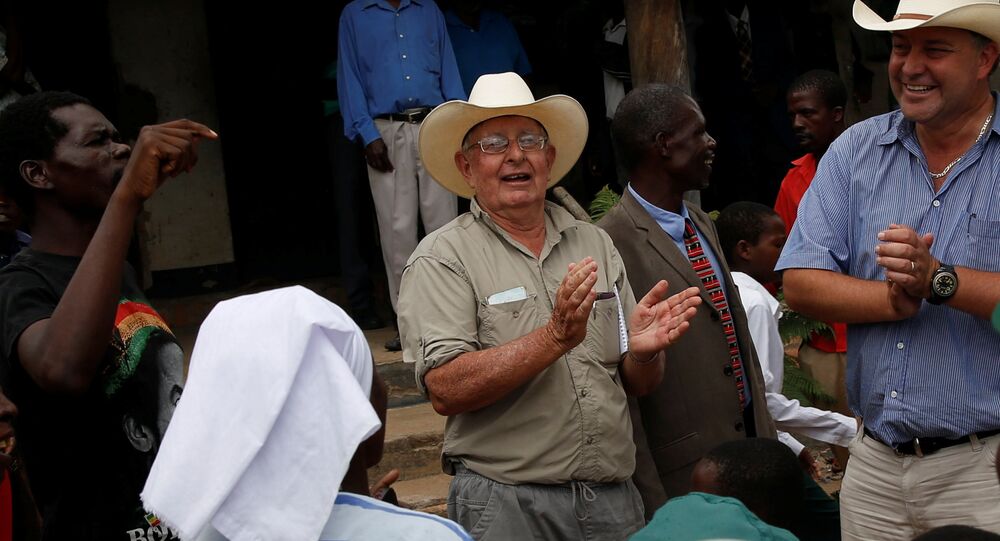 A white Zimbabwean farmer and his family, evicted at gunpoint by the government of Robert Mugabe six months ago, has returned to his community to a joyous reception, becoming the first white farmer to get his land back under the new government of President Emmerson Mnangagwa.

71-year old farmer Robert Smart and his family returned to Lesbury farm, about 200 km from Zimbabwe's capital of Harare, on Thursday under military escort. Smart was met by local residents and dozens of his former employees, who greeted him with cheers, songs and ululation and fists raised in the air.

Jubilant locals nearly knocked the farmer down as he stepped out of a car onto his land. "I am ecstatic. Words cannot describe the feeling," Darryn Smart, the farmer's son, said, speaking to AP. "Getting back to the farm has given not just us, but the whole community hope that it's a new Zimbabwe, a new country," he added, according to Reuters.

© REUTERS / Mike Hutchings
'Zimbabwe's Political Change Not Coup' - African Union Commissioner
83-year-old Anna Matemani, whose family grew up on Smart's farm, said she was happy to see the family return. "He always helped us and the farm provides jobs for many of our young people," she said.

Smart and his family were forced to leave their farm at gunpoint in June by riot police armed with assault rifles and tear gas. Observers say his return, enabled under the personal initiative of new President Mnangagwa, have given rise to hopes that the policy of evicting white farmers, a common practice under recently ousted Zimbabwean leader Robert Mugabe, has come to an end.

White Zimbabweans make up less than 1% of the country's population, but during the colonial era and its immediate aftermath, owned vast tracts of some of the most productive land in the southern African nation. Under Mugabe, white farmers were evicted, often violently, starting in 2000. As of 2017, only a few hundred of the estimated 4,500 white-owned farms remain. Farmers previously complained that evictions continued even after Mugabe indicated that the land seizures policy was over four years ago.

© REUTERS / Mike Hutchings
Mnangagwa Always Pays His Debts: Anti-Mugabe Generals Given Top Gov't Jobs
Mugabe was forced to resign last month by his own ruling party and the military, with Mnangagwa taking charge and promising to correct some of the injustices committed under his predecessor. The new president is expected to carry out land reforms and implement other policies to enable the return of foreign investors scared off under Mugabe. The new government ordered those occupying white farmers' land to leave.

The country presently faces major economic problems, including mass unemployment, skyrocketing prices and a currency shortage. Observers believe President Mnangagwa is looking to revive the economy in the run-up to elections next year. "There is no business as usual. Things have changed, it's a new era," he said Thursday during a meeting with business leaders in neighboring South Africa.