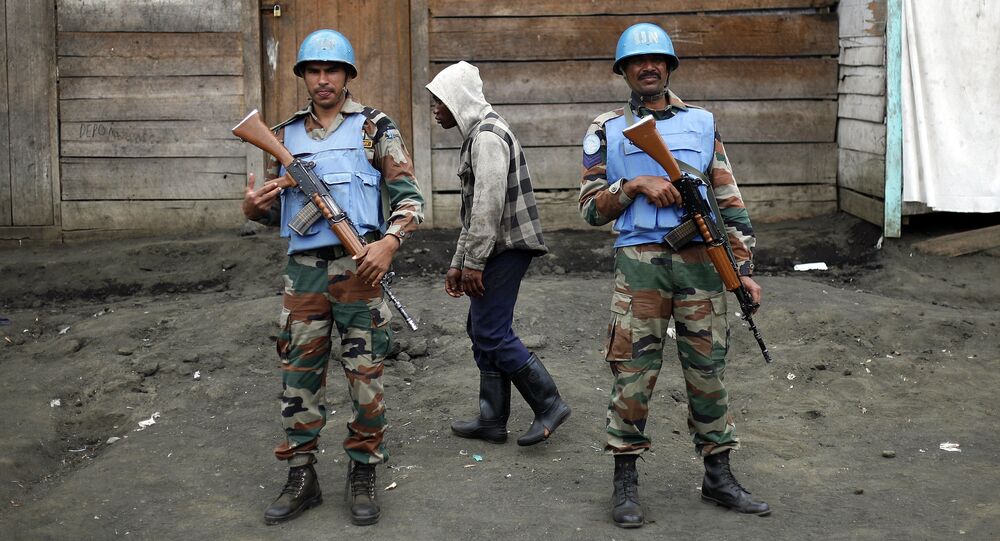 A UN peacekeeping mission base in Congo has repelled an attack by insurgents of the Allied Democratic Forces, according to radio station Okapi, which is linked to peacekeepers.

UN Spokesperson Stephan Dujarric has reported that fourteen UN peacekeepers had been killed and more than forty wounded in the attack on the peacekeeper's base in the North Kivu province, in eastern Democratic Republic of Congo. The targeted peacekeepers are mainly from Tanzanian, according to the UN officials.

"It's a very huge attack, certainly the worst in recent memory," Haq added.

© AFP 2020 / Tony KARUMBA
Rights Group: Congo Government Hired Foreign Mercenaries to Kill Protesters
Armed militants from the Allied Democratic Forces carried out a brutal attack on the base of the UN peacekeeping mission late on Thursday. The base is located 45 kilometers (27 miles) from Congo's Beni, town repeatedly hit by rebels.

Radio station Okapi, which is linked to the UN peacekeepers' mission, reported that fighting lasted for four hours.

UN Secretary General Antonio Guterres has strongly condemned the assault and called for the attackers to be brought to justice.

"This is the worst attack on UN peacekeepers in the Organization’s recent history. It's another indication of the enormous sacrifices made by troop-contributing countries in the service of global peace. These brave women and men are putting their lives on the line every day across the world to serve peace and to protect civilians," Guterres added.

The Secretary-General’s full remarks on the attack on @MONUSCO peacekeepers: https://t.co/em725PoSoM

At the Annual High-Level Pledging conference for @UNCERF, the Secretary-General will speak on the attacks on @MONUSCO peacekeepers in the Democratic Republic of the Congo. Watch at 10:00 a.m. EST on https://t.co/YDghrBCyDr

Under-Secretary-General for the UN Department of Peacekeeping Operations Jean-Pierre Lacroix wrote on Twitter that he was "outraged" by the attack.

Outraged by the attack against @MONUSCO in #NorthKivu DRC last evening, where a large number of @UN peacekeepers have been killed & wounded. Our thoughts & prayers with families & our colleagues in @MONUSCO. Reinforcements are on scene & medical evacuations by Mission ongoing. pic.twitter.com/l84tFHYKMR

The United Nations has sent technical experts to assist in the criminal investigation of the attack on UN peacekeepers, UN Spokesperson Dujarric said during a press briefing on Friday.

© AP Photo / John Bompengo
Ethnic Tensions in Congo See Hundreds Massacred, Young Girls Drinking Blood
The DRC has been mired in conflict since the mid-1990s. While the so-called Second Congo War ended in 2003, clashes have continued in the eastern parts of the country, where various rebel groups, including the Allied Democratic Forces, continue to operate. The province of North Kivu remains one of the DRC's most unstable regions.

The UN Organization Stabilization Mission (MONUSCO) took over from an earlier UN peacekeeping operation on July 1, 2010. The mission’s mandate includes protection of civilians, humanitarian personnel and human rights activists threatened with violence, as well as support for the government of the DRC.