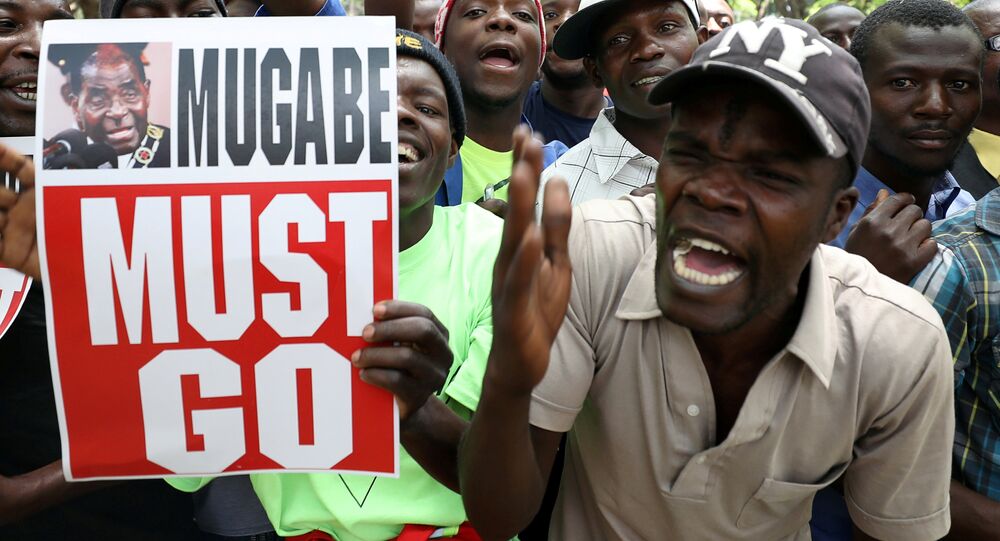 Chinese businessmen say Zimbabwe's latest political upheaval will not affect their projects in Africa, yet economic policies against foreign companies in Zimbabwe have impacted Chinese trade and investment there. Experts say China should beware of similar political risks in other Belt and Road countries where Chinese companies invest heavily in.

Despite close bilateral ties, Chinese trade and investment had already been dwindling due to low profitability and high political risks prior to the political crisis. Chinese investors expect the current situation in Zimbabwe will eventually lead to new and even greater opportunities.

Mugabe has been kicked out as the party leader by Zanu-PF, Zimbabwe's ruling party, and was given an ultimatum to choose between resigning by Monday or being impeached.

China has dozens of infrastructure projects currently taking place in Zimbabwe. The latest deal, between state-owned Dongfang Electric and the Power Construction Corporation of China to supply engines for Zimbabwe's Hwange thermal power plant, was signed on November 10, just days before the upheaval.

"To be honest, Chinese businessmen in Zimbabwe are not mentally prepared for this. But those who have been here long enough know that Mnangagwa has a good relationship with China, so there's nothing to worry about," Jerry Zuo, director of the NiHao China-Zimbabwe Business and Culture Exchange Center, who has been living in Zimbabwe for 10 years, told the Global Times.

Mnangagwa has visited China multiple times, the latest in 2015 when he proposed to adopt the Chinese yuan as Zimbabwe's official legal tender. He also invited Chinese businessmen to stake claims in Zimbabwe's key economic areas.

An employee of a Chinese company who has been working in Africa for many years told the Global Times that there are around 10,000 Chinese nationals living and working in Zimbabwe. Many of China's State-owned companies have infrastructure projects there, and private Chinese companies are engaged in Zimbabwe's mining, textile and chemical industries.

He Wenping, a research fellow at the Institute of West Asian and African Studies, Chinese Academy of Social Sciences, said Zimbabwe's political crisis will have little impact on Chinese investment in the country.

"No matter who becomes the new president, the successor will only be more motivated to forge a good relationship with China, which is Zimbabwe's biggest investor," she said.

This sentiment was echoed by Shen Xiaolei, an assistant research fellow at the Institute of West Asian and African Studies of the Chinese Academy of Social Sciences, who said that while trade between China and Zimbabwe may be affected in the short term, long-term friendly relations with China will not change.

Shen added that the current political crisis is simply a factional fight within Zanu-PF and the party itself has always been friendly with China.

The visit of Zimbabwean army commander Constantino Chiwenga, who lead the military takeover, to China only a week prior to the coup fanned rumors and speculation by Western media that China had been notified of, and even approved, the takeover beforehand.

He Wenping said any claims of a China connection with Zimbabwe's military takeover is ridiculous. "It was only a pre-planned normal visit. It is impossible for them to apply to another country before taking military action," she told the Global Times.

Geng also firmly denied the rumor that Mnangagwa has fled to China, as some Western media has reported.

Although experts say that while the political shift itself may not damage Chinese investment in Zimbabwe, the worsening economy in Zimbabwe affected trade between the two countries prior to the military takeover.

Shen said that due to Zimbabwe's economic plight and Mugabe's recent strict policies on trade and foreign investment, such as restrictions on imports and campaigns to indigenize foreign companies, Chinese investment in Zimbabwe has been dwindling over the past year.

According to China's Ministry of Foreign Affairs, trade volume between China and Zimbabwe was $1.12 billion in 2016, dropping 14.77 percent from the year before.

According to an article published in Zimbabwe's daily newspaper NewsDay in 2016, most of the multi-billion-dollar projects signed between China and Zimbabwe have been "put on hold" due to the economic and political challenges the country has been facing.

The projects were stalled for reasons including reluctance on the Chinese side to be the guarantors of loans, as the Zimbabwean government had failed to settle millions of dollars of loans they had previously owed.

Local economist Vince Musewe told the newspaper, "I think that nobody is prepared to commit huge amounts to Zimbabwe until we sort ourselves out. We are a means to an end for China, and they will take their time to fully invest in Zimbabwe."

Chu Yin, deputy director of the Belt and Road Institute at the University of National Defense, told Xinhua that Zimbabwe has a relatively poor investment environment and high risks.

He said the country's antagonistic policies against foreign companies, enforced last year, which requires all foreign companies with assets of more than $500,000 to give up majority control to black Zimbabweans, is just one example of the risks Chinese companies face as they invest in countries along the Belt and Road.

Many Asian and African countries along the Belt and Road have similar problems. Political risks may lead to a lack of sufficient creditworthiness and an inability to honor financial obligations.

Chinese companies may also have little profitability, according to Guo Chaoxian, a research fellow at the Institute of Industrial Economics, China Institute of Social Science, in an interview with Xinhua.

A case in point is China's Myitsone Dam hydroelectric power project in Myanmar, which has been suspended due to local protests and political shifts.

Chu said many state-owned companies make foreign investments as required by the government, but without conducting proper research beforehand. "We should figure out whether the investment comes first, or politics comes first," Chu told Xinhua.

The companies themselves also face their own issues, such as a lack of capability to invest abroad. Guo said that, due to their limited international experience, many Chinese state-owned companies fail to set up internal management systems that meet international standards. China also lacks talent and expertise in foreign languages, technology, law, leadership and communication skills.

Thus, Beijing must do more to support state-owned companies, such as loans and legal support through overseas law agencies, he told Xinhua.

Zimbabwe Ruling Party to Dismiss Mugabe as Its Leader - Reports