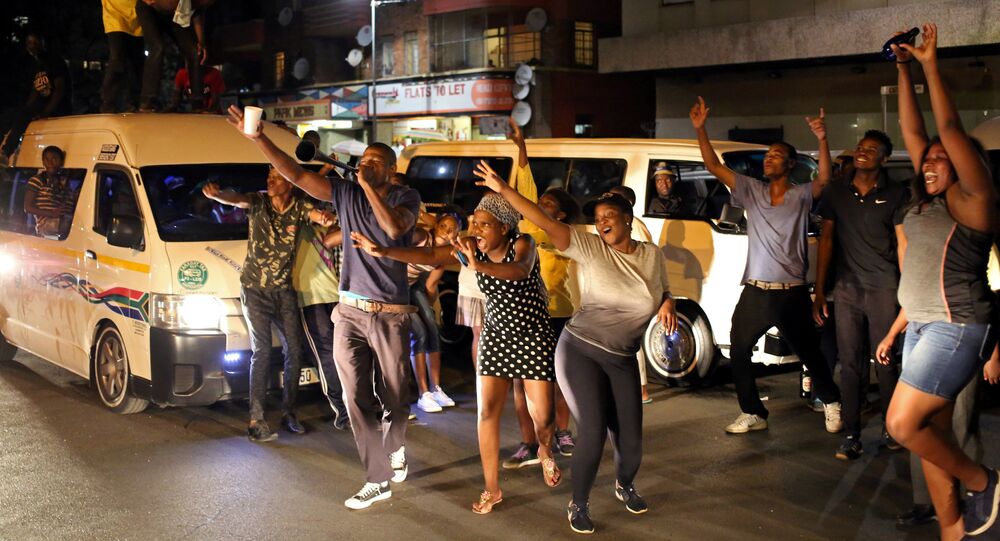 Within minutes after the speaker of the country's parliament , Jacob Mudenda, read out President Mugabe's resignation letter, Zimbabweans poured into streets to celebrate the new era which lies ahead after 37 years' rule of their 93-year-old leader. Many however warn that it can "morph into chaos in a few months."

The celebrations began in the parliament when the lawmakers welcomed the news, and their jubilation was echoed in the streets of the nation's capital city Harare.

Thousands of Zimbabweans poured onto wide boulevards of the capital and other big cities to dance, sing, honk car horns, wave flags and cheer.

Some went out with their posters of Zimbabwean army chief Constantino Chiwenga and  Emmerson Mnangagwa, whose dismissal earlier this month triggered the military takeover and subsequent resignation of the president after an eight-day crisis as he refused to leave.

Celebrations in the streets of the capital Harare' central business district after word from the speaker of parliament confirming Mugabe's resignation pic.twitter.com/iu6YwAr9kJ

​The festivities lasted until sundown.

Many social media users, however, were cautious, warning of the uncertainty lying ahead, and recalling developments in other countries which have toppled their long-time rulers.

​And warned against "morphing it into chaos" in some time.

I hope celebrations following Mugabe's resignation will not morph into chaos in a few months, like it sadly often does https://t.co/UiwqgxNE23

There was no immediate information about what would happen next to the ex-president or his family.

​However many media sources suggested that "the letter allowed him to leave office with some remaining dignity" while allowing the "group behind his downfall to present it as a constitutional transfer of power, rather than a change of government effected at gunpoint."