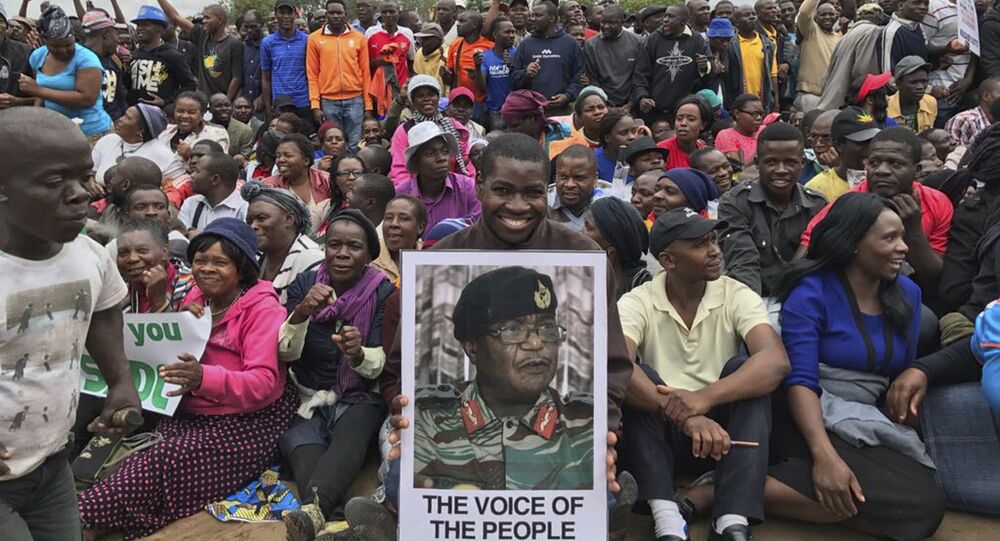 On Sunday, Zimbabwean African National Union-Patriotic Front dismissed Mugabe from his post as party leader and called on him to resign from the presidency. On Tuesday, after the Zimbabwean parliament approved Mugabe's impeachment, the whole country has erupted in Jubilation, blocking the traffic in the cities.

Inspired Residents of the Zimbabwean capital of Harare have filled the streets, having blocked the traffic in the city’s center. They are whistling, waving hands and phoning to their relatives to tell them the news. People are also embracing bystanders without hiding smiles.

Many people taking part in the demonstration did not expect such quick developments. One of the capital’s residents told Sputnik that he thought the process of impeachment would take at least a week.

Another bystander – young man Tafadzwa – told Sputnik he was glad that "this guy [Mugabe] has finally stepped down."

"Nothing has changed in our country since 1980. I am so happy, very happy!" Tafadzwa told Sputnik.

Aylin, who was dancing at the crossroad, also told Sputnik that she was happy.

"I am so happy! We have been waiting for that for a long time and this day came!" she said.

Her friend even called the resignation of Mugabe a new independence day for Zimbabwe.

"We nominated him [Mnangagwa] to lead the party. There is an urgent need for an appointment of a new president," Matuke said.

He pointed out that Mnangagwa would return to Zimbabwe in coming hours. The latter fled the country after eruption of the political crisis.

Zimbabwean authorities have to implement Political and Economic Reforms

The US Secretary of State Rex Tillerson said in a statement on Tuesday that the Zimbabwean authorities have to implement needed reforms and stands ready to support the people as the reforms advance.

"We urge Zimbabwe’s leaders to implement much-needed political and economic reforms for a more stable and promising future for the Zimbabwean people," Tillerson said on Tuesday. "We will continue to support the people of Zimbabwe as these reforms move forward."

"We congratulate all Zimbabweans who raised their voices and stated peacefully and clearly that the time for change was overdue. Zimbabwe has an extraordinary opportunity to set itself on a new path," he said.

Tillerson noted that Washington urges all parties in Zimbabwe to exercise restraint and respect constitutional and civilian order.

"Whatever short-term arrangements the government may establish, the path forward must lead to free and fair elections. The people of Zimbabwe must choose their own leaders," he stated.

The US State Department Spokesperson Heather Nauert said during a press briefing on Tuesday that the resignation of Zimbabwe's leader Robert Mugabe is a historic opportunity for the citizens of the country.

"Certainly what we saw today, the resignation of Robert Mugabe is a historic opportunity and historic moment for the people of Zimbabwe," Nauert said.

The spokesperson added that the citizens of Zimbabwe have strongly voiced a desire to allow the nation to rejoin the international community.

A Chance to Completely Eradicate Oppression

The UK Prime Minister Theresa May said Tuesday that the resignation of Zimbabwean President Robert Mugabe provides the country with a chance to completely eradicate oppression in the future.

"The resignation of Robert Mugabe provides Zimbabwe with an opportunity to forge a new path free of the oppression that characterised his rule. In recent days we have seen the desire of the Zimbabwean people for free and fair elections and the opportunity to rebuild the country’s economy under a legitimate government," May said in a statement.

The UK prime minister added that the United Kingdom would support Zimbabwean people in their aspiration to live in a free and fair society.

May also pledged to work with UK regional and international partners to assist Zimbabwe in achieving a better future, which it deserves.

Meantime, the US-based human rights group Freedom House warned in a press release on Tuesday that Zimbabwe’s military coup leaders appear more interested in maintaining their positions in a one-party state than in ushering in a period of democratic reform

There is nothing yet to suggest that Zimbabwe is about to undergo a substantive shift toward a more democratic and open society based on the full implementation of its 2013 constitution," the release stated.

The release charged that Army Chief Constantino Chiwenga appears to have acted on behalf of Emmerson Mnangagwa, who was ousted as vice president ten days ago.

#Zimbabwe "Our true liberation heroes" on a placard with the pictures of General Constantino Chiwenga and Former VP Emmerson Mnangagwa. pic.twitter.com/3IpTRmuraN

"Neither of these has expressed any interest in moving outside the boundaries of revolutionary governance established by the ruling party, ZANU-PF, under Mugabe, and both seem primarily concerned with ensuring the continued dominance of the party after his demise," the release explained.

© REUTERS / Philimon Bulawayo
WATCH: Zimbabwe Celebrates Robert Mugabe's Resignation
The ZANU-PF party has presided over a series of flawed and allegedly stolen elections; the largely self-inflicted collapse of the economy and the displacement of millions of citizens driven out of the country by a combination of economic hardship and political violence, the release said.

Last week, Mugabe, who has been leading Zimbabwe for over 30 years as both president and prime minister, and his guards were confined to his house by soldiers. The military deployed armored vehicles in the Zimbabwean capital of Harare and took control of the state-owned broadcaster. The military then stated that their actions did not constitute a seizure of power and instead targeted "criminals."

After being placed under house arrest, the nation’s independence leader and longtime President Robert Mugabe resigned on Tuesday.

News reports have characterized the coup as a power struggle between Mnangagwa supporters and backers of Mugabe’s wife Grace, who had reportedly been chosen by 93-year-old Mugabe as his successor.