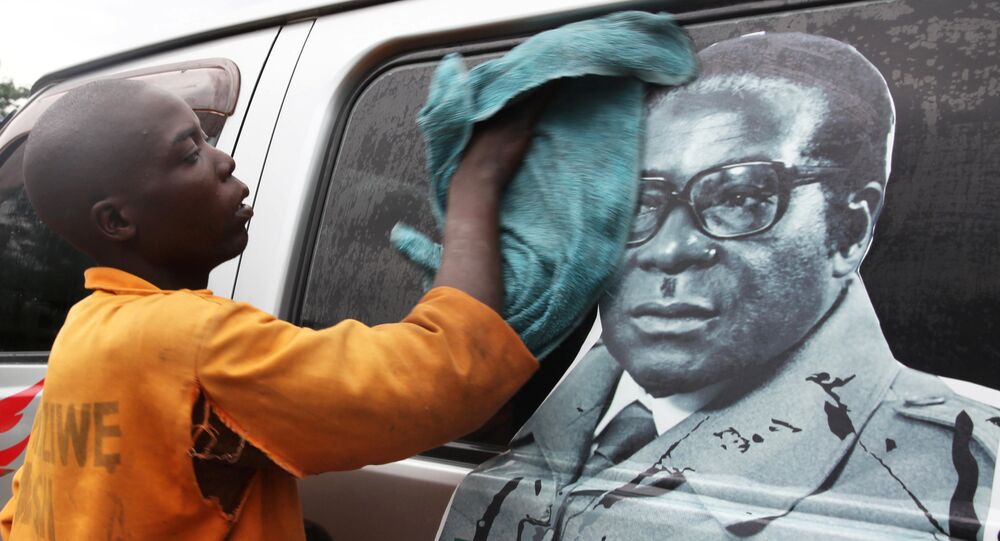 Zimbabwe’s long-time President Robert Mugabe has been put under house arrest as the country’s military continues negotiations to find a new leader. Earlier, the army took control over government offices and the state broadcaster, saying it was targeting "criminals" around the president.

The army’s move which began Tuesday with tanks entering the outskirts of Harare raised speculations about a military coup. The leader of Zimbabwe’s War Veterans Association told ITV News that the military had removed Mugabe who has been ruling the country for 37 years.

The army, however, said in a televised statement on Wednesday that there was no "military takeover of government" underway and that the president was "safe and sound."

On Wednesday, South African President Jacob Zuma announced that he had been contacted by Mugabe, who had been "confined to his home but said that he was fine."

© AFP 2021
Young women walk past an armoured personnel carrier that stations by an intersection as Zimbabwean soldiers regulate traffic in Harare on November 15, 2017

Later on in the day, the African Union stated that the crisis in Zimbabwe "seems like a coup" and urged  respect for the country's Constitution. According to Alpha Conde, the head of the organization and president of Guinea, the African Union condemns the actions of the military in Zimbabwe as "clearly soldiers are trying to take power by force".

According to The Independent, there is no guarantee that even if the military took power it could lead Zimbabwe to a democratic transition. Jeffrey Smith, executive director of the pro-democracy non-profit Vanguard Africa, told the newspaper that the "military has long been a chief impediment to democratic progress in the country" and that a truly democratic transition would require them to engage in a "genuine dialogue with civil society and the political opposition."

Meanwhile, there has been speculation that Emmerson Mnangagwa could be the most likely successor to the 93-year-old president.

In early November, Mugabe dismissed Mnangagwa, the first vice president of Zimbabwe, who enjoyed the support of the country's army. On Monday, Constantine Chiwenga, the commander of the Zimbabwe Defense Forces, called on the president to stop the purge within the ruling Zimbabwe African National Union – Patriotic Front (Zanu-PF) party, from which Mnangagwa had been expelled.

On Thursday, it was also reported Morgan Tsvangirai, an opposition leader and the country’s former prime minister, has returned to Zimbabwe amid the leadership crisis.