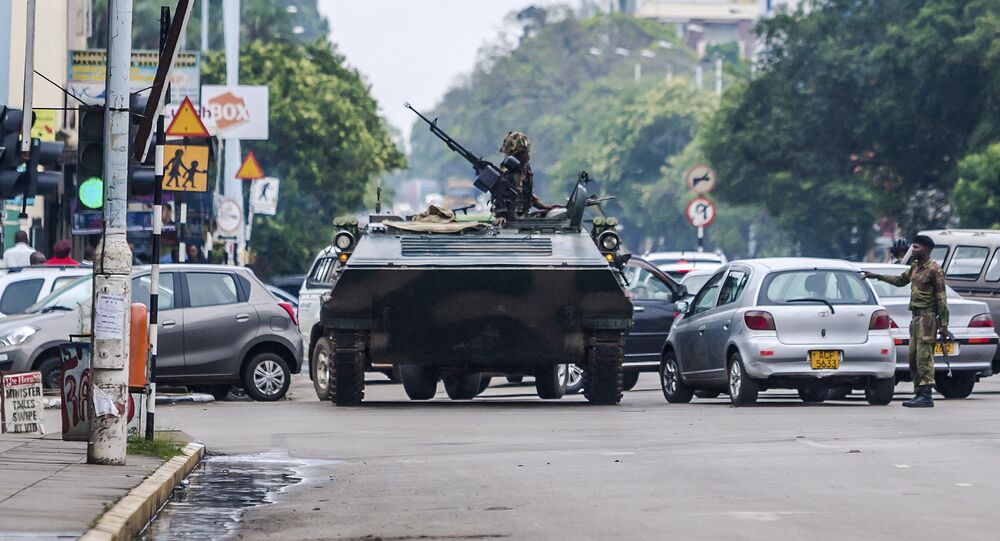 Locals have commented on the situation in Zimbabwe amid rumors of a military coup.

MOSCOW (Sputnik) — Life in Zimbabwe’s capital Harare remains normal and businesses continue to conduct their operations as usual, according to representatives of local firms.

"There are some military men roaming the streets, but nothing more than that. It’s totally peaceful right now. It’s just been unstable … but people are moving normally in the streets. Maybe we could say that the situation is tense, but nothing more. There’s no violence," a representative of Netvest Consultancy told Sputnik.

An employer of Bedrock Consulting and Advisory has also confirmed that despite the military presence on the streets, people were able to start their day normally.

"We haven’t been affected at all. Everything is going on as usual. Things are going as usual, our office is actually located close to one of the army vehicles … and nothing really has changed in the streets. Everyone is going about their business as usual," the employer said.

The statements come after a spokesperson for Harare’s Town Hall told Sputnik that the work of the city’s council had not been affected by the military presence, adding that public transport in the city was running as it does every day.

On Tuesday, media reported that armored vehicles had been moving toward Zimbabwe's capital, adding that explosions occurred in Harare and that the city's television broadcasting station had been seized by the military.

The unrest occurred due to tensions between Robert Mugabe's ruling party ZANU-PF (the Zimbabwe African National Union – Patriotic Front) and the military over the issue of the 93-year-old leader's successor, with the military announcing that their actions were not a coup, but rather directed against the "criminals" around Zimbabwe's president who were "causing social and economic suffering in the country.”

What is going on in #Zimbabwe?

© AP Photo
Russian Embassy in Zimbabwe Limits Operations Amid Military Actions in Country
Last week, the vice president of Zimbabwe, Emerson Mnangagwa, was accused of disloyalty and fired, paving the way for Grace Mugabe, Zimbabwe's First Lady, to become the president in the future.

According to South African News24, Mugabe, who has been the country's president since 1987, managed to reach an agreement with the army's representatives that his wife would leave the country, while the president himself was preparing to announce his resignation. According to media reports, Mugabe is now under heavy military guard.

President Mugabe along other comrades was in the armed struggle that gave the people Rhodesia freedom in 1980. We appeal to the Zimbabwe Defence Forces to treat him with respect as an African oldman & facilitate his joining his family in South Africa pic.twitter.com/IxzIzwmJPz

While Sky News has reported that Grace Mugabe is believed to be in Namibia, the president of neighboring South Africa, Jacob Zuma, said that he talked to Zimbabwe's President Robert Mugabe "who indicated that he was confined to his home but said that he was fine."

US Journalist Arrested in Zimbabwe Over Insulting Country’s President – Reports