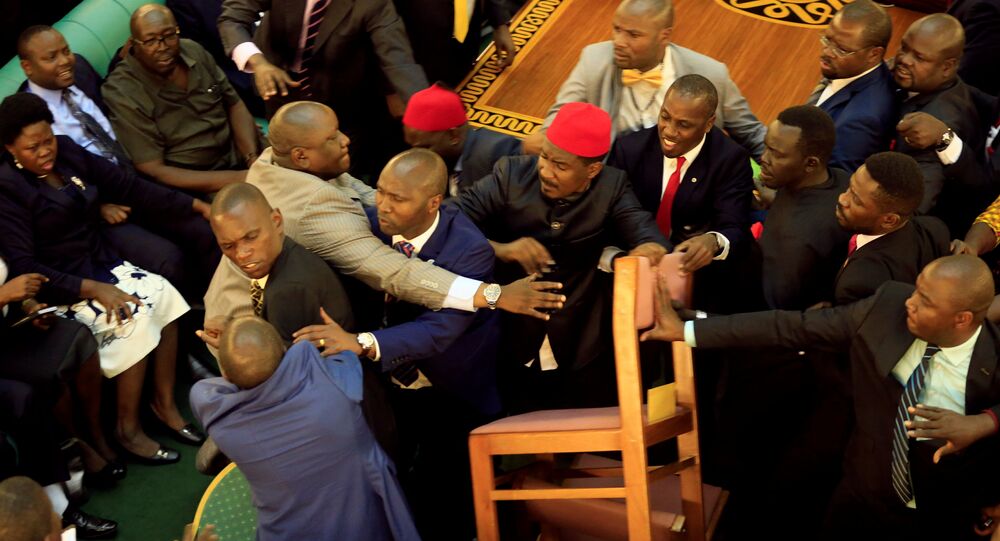 The parliamentary house of Uganda turned into a scene of ultraviolence that Vince McMahon would have been proud to promote, as supporters and opponents of President Yoweri Museveni threw chairs and swung microphone stands at one another in a mad brawl.

The din began over a proposed change to the constitution. Museveni, who became president of Uganda as a 42-year-old man in 1986, just celebrated his 73rd birthday earlier in September. Uganda's next election is in 2021, but the nation's constitution stipulates that nobody older than 75 can run for president.

However, members of Museveni's National Resistance Movement (NRM) party have pushed for a change to the constitution that would allow Museveni to run again and potentially extend his 31-year rule. The NRM controls 293 of the legislature's 426 seats — the second largest party, the Forum for Democratic Change (FDC,) only controls 36 seats. With an absolute majority of seats, the NRM proposal is almost certain to pass.

Other parliamentarians violently opposed the proposal, and a Tuesday debate on the amendment turned the Parliament into a warzone. Twenty-five MPs were forcibly ejected from the chamber as a result.

The very next day, red-capped Museveni opponents returned to the Parliament and fighting broke out once more. At least two lawmakers, both female, needed to be carried out of the chamber.

Over the next few days, the Museveni government deployed police and military around the Parliament, tear-gassing and arresting opposition protesters. They have also suppressed news of the protests within Uganda, banning the live broadcast of any event that might "incite the public," which included the parliamentary debate.

In addition, the Ugandan Communications Commission (UCC) told broadcast media outlets that they may no longer air events that "stir up hatred, promoting a culture of violence." The sight of their elected officials screaming, beating each other and rolling around on the ground like football hooligans may prove disturbing, according to UCC executive director Godfrey Mutabazi.

"If you looked at those images coming from Parliament and you're a child, I don't think those were the most decent pictures," Mutabazi told local outlet NBS Television.

In the weeks leading up to the debate over the constitutional amendment, the police have also cracked down on groups opposed to Museveni that might protest the bill — including a raid on the Kampala headquarters of ActionAid International, a South Africa-based NGO whose stated goal is to "help people use their own power to fight poverty and injustice" and has been critical of Museveni.

Writing for Newsweek, Kizza Besigye said that "under Museveni, corruption has become the way Uganda works, not the way it fails. The stench of corruption seems to go to the top." Besigye, once a Museveni lieutenant, is now his most bitter political rival and has unsuccessfully run against Museveni as the FDC candidate in the last four elections.

Besigye has accused Museveni of rigging the 2016 election, saying that he had "incontrovertible evidence that our Forum for Democratic Change party won by 52 percent of the vote." He also accused Museveni and the NRM of "the erosion of constitutionalism," many human rights abuses such as "torture, disappearances, killings and suspicious deaths, the shooting dead of unarmed protestors, military raids on civilian courts, and the charging of civilians in military courts."

In 2006, NRM parliamentarians removed a clause of the 1995 Ugandan constitution that limited presidents to two five-year terms.

No Russian Casualties in South Sudan Clashes - Embassy in Uganda