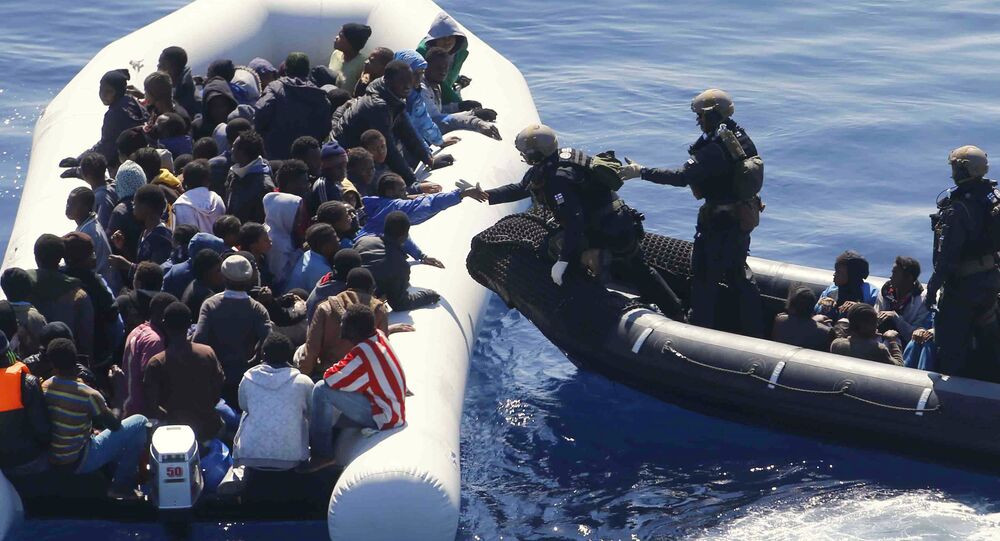 The representatives of three non-governmental organizations, Medecins Sans Frontieres (MSF, also known as Doctors Without Borders), Save the Children and Germany’s Sea Eye, temporarily halted their rescue operations in the Mediterranean Sea because of disagreements with the Libyan authorities and coastguard commneted the situation.

PARIS (Sputnik) — Libya is unlikely to solve the migration problem on its own but could be part of the solution, and it is because of this Europe should not delegate its responsibilities to the African country, the representatives of non-governmental organizations that suspended rescue operations in the Mediterranean over a stand-off with the Libyan authorities, told Sputnik.

Three non-governmental organizations, Medecins Sans Frontieres (MSF, also known as Doctors Without Borders), Save the Children and Germany’s Sea Eye, temporarily halted their rescue operations in the Mediterranean Sea because of disagreements with the Libyan authorities and coastguard.

© REUTERS / Stefano Rellandini
UN: Rome-Proposed Rescue Code of Conduct Could Result in More Refugee Deaths
Delphine Leterrier, the deputy director general of MSF France, said that the desire to stop migration flows before they reach the European border was clear, but simply blocking migration routes was not the solution. Neither was the attempt to pass the responsibility for handling the crisis on to Libya.

"The best way to boost coordination is to open legal routes of migration… We can’t expect Libya [alone] to be a solution for this problem. It is totally hypocritical to think that solving the Libyan problem will be the comprehensive solution. It can be part of the answer, but not a unique answer," Leterrier told Sputnik.

The MSF deputy director general said that Italy may have ceded the responsibility to Libya because it was overwhelmed by the migration influx and felt that it was alone in trying to address it.

"That’s what it repeatedly asked of the European Union – to coordinate a comprehensive response to allow securing the migrants’ access routes in which it wouldn’t be the only one to receive the migrants flow. So there is a lack of a comprehensive strategy," Leterrier said.

Michael Buschheuer, the founder of the Sea Eye NGO, which also suspended its rescue operations in the Mediterranean, said that if the Central Mediterranean route from Libya to Italy's shores was closed, new ones would emerge.

"I think migrants will find other ways to flee Libya, these ways maybe much more dangerous, than the route from Libya they are taking now," Buschheuer told Sputnik.

PAID OFF BY EUROPE

© REUTERS / Ismail Zitouny
Libyan National Army Head: EU Desire to Keep Migrants in Libya 'Not Acceptable'
Buschheuer suggested that Libya was imposing harsh restrictions because it was being incentivized by the European Union.

According to Buschheuer, the new development had a positive side, namely the decrease in the number of people trying to use sea routes, as well as a negative one related to migrant and refugee accommodation in Libya.

"People were held up for slavery, women have to be prostitutes. Things like that happen there and it happens to hundreds, to thousands of people," Buschheuer said.

In February, the European Union leaders agreed on a plan to help stabilize Libya and better equip it to handle the influx of refugees, which use the country as a transit point on their way to Europe. The EU funds were allocated, among other things, for training and equipment for Libyan coastguard.

© REUTERS / Stefano Rellandini
Over 1,700 Migrants Rescued Off Libyan Coast in 2 Weeks - IOM
The Sea Eye's founder said that the organization stopped its operations because the Libyan authorities told rescue non-profits to avoid entering their waters.

"The reason is that the Libyan government told all the NGOs not to enter the navy areas which they told us is about 90 miles away from the coast. This is usually international waters, but they told us now it’s Libyan waters, so we can’t enter them and don’t have the possibility to continue our rescue operation," Buschheuer said.

According to him, the rescue vessels sometimes faced shooting from the Libyan side, so continuing operations would be very dangerous for them.

Leterrier said that NGOs needed a clearer delineation of the rescue zones in the Libya-controlled parts of the sea.

"This control is delegated to Libya by the European states, and here we need clarifications: when we are delegating the part of international waters to the Libyan control – what consequences will it have, what does it lead to in terms of the rescue operations – will they be hindered in this enlarged region, beyond the Libyan territorial waters?" Leterrier said.

The MSF deputy director general said that the uncertainty over the rescue strategy was growing in part over what she called "a tendency of criminalization of the activities of the NGOs."

"It’s international responsibility. It’s not only the Libyan government’s responsibility; the French, Italian, the European government have the authority, the competence to clarify the strategy defined for the saving and the searching activities in the area," Leterrier said.

Earlier this year Italy suggested that humanitarian groups regularly helping rescue migrants in the Mediterranean Sea sign a recently drafted code of conduct. This agreement will require these groups to prove they have sufficient training and equipment to carry out rescue missions; refrain from transferring the people they save to other vessels and instead return to port and let migrants disembark; and allow judicial police officers on board, upon request, to investigates cases of human trafficking. Several aid groups, including the MSF, have refused to sign to code of conduct.

The NGOs involved in rescue operations have been facing growing pressure from European and Libyan authorities, who are dissatisfied with the groups' activities. In April, Italian prosecutor Carmelo Zuccaro, who was looking into potential ties between rescue non-profits and people smugglers, said he may have found evidence of such a connection. Zuccaro later refuted his own statement, saying there was no proof.

The rescue services have also faced allegations that they may be inadvertently helping human traffickers and providing an incentive for migrants and refugees to attempt the sea crossing. Wolfgang Sobotka, the Austrian interior minister, reportedly said in April that rescue operations had to be halted because they gave smugglers reason to persuade people to brave the sea.

Europe has faced a great influx of people, many of them from Africa or Middle East, fleeing poverty or conflict in their home countries. Hundreds of thousands of people have arrived in Europe causing the European Union members to disagree among themselves over who should accommodate migrants and leading to internal political tensions in several countries.