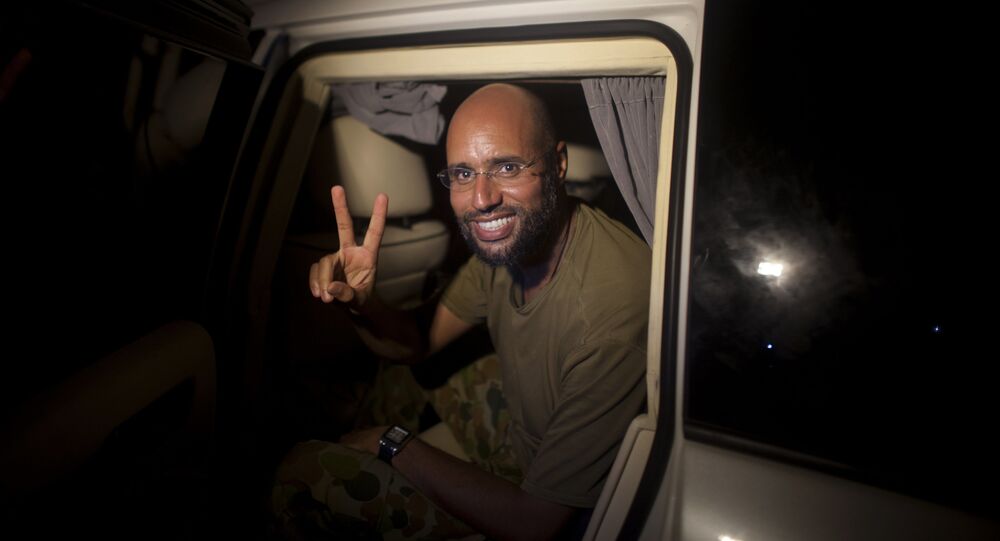 The son of toppled Libyan leader Muammar Gaddafi has been released from captivity by the Abu Bakr al-Siddiq militants following a request from the Tobruk-based government in eastern Libya. Speaking to Radio Sputnik, senior Middle East expert Jacques Neriah explained why Gaddafi's release may have important implications for country's future.

Over the weekend, a statement by the militants obtained by Sputnik confirmed that Saif al-Islam Gaddafi, Muammar Gaddafi's second son, left jail in the Libyan city of Zintan on Saturday. The militant group captured him six years ago, amid the collapse of the Libyan government in a NATO-supported operation to oust his father. Saif's lawyer confirmed that he had been freed, and told Sputnik that Gaddafi has his own strategy for achieving national reconciliation in the civil war-ravaged country.

It is rumored that Saif has been moved to the Tobruk area of eastern Libya. The leader had previously been sentenced to death in absentia by a court in Tripoli, the center of the Western-backed Government of National Accord.

Speaking to Radio Sputnik about the significance of Saif's release, Dr. Jacques Neriah, a Middle East expert who served as foreign policy advisor to the late Israeli Prime Minister Yitzhak Rabin, said that overall, it may be too early to say.

Still, Neriah admitted that "the fact that Saif has been released because of the so-called amnesty given by the eastern, [Tobruk]-based government…means that there may be a significance, [in that] that he has undoubtedly joined the forces of General [Khalifa] Haftar in the eastern part of Libya, which gives a bigger role for that part of Libya in the reunification of the republic."

© REUTERS / Hani Amara
Son of Toppled Leader Gaddafi Has 'Defined Strategy' to Reach Libyan Settlement
The situation is complicated, Neriah said, because the figure of Saif al-Islam was not exactly a popular one in 2011, with the International Criminal Court accusing him of 'crimes against humanity', charges which the political figure has denied. "So I don't think that his release is an asset to the east, but it a symbol for the tribal structure of Libya," the observer said.

Asked what role Saif may now play in eliminating terrorism and restoring economic stability in Libya, Neriah admitted that the potential for this exists, but the country must first be reunited.

"This forty-five year old economist has a PhD from the London School of Economics; he could in fact be an asset in the economic development of Libya, but right now it's too early [to say], because Libya has to be reunited again, and as [things stand] today, there's still a lot to be done between the government in Tripoli and the alternative government [in Tobruk]."

As far as Saif's potential to help reunite the country, Neriah said that the potential was there, although the analyst noted that he personally prefers General Haftar.

© AP Photo / Mohammed El-Sheikhy
In this March 18, 2015 file photo, Gen. Khalifa Haftar speaks during an interview with The Associated Press in al-Marj, Libya.
© Sputnik / Alexei Druzhinin
The 'Third Force': Gaddafi's Supporters Making Political Comeback in Libya
"[Saif] belongs to the Qadhadhfa tribe, originating from Morocco centuries ago. This tribe has been the [rallying force] for most of the tribes in Libya. As we know, Libya is a tribal structure. So in a way, it could be a rallying point – a symbol. But as I see things…I think the people of Libya would like to forget the name Gaddafi, and look for another future with other people, and I believe that General Haftar is the better option."

Asked whether Saif al-Islam, whose LSE PhD thesis was titled 'The role of civil society in the democratization of global governance institutions: from 'soft power' to collective decision-making?' could make him a kind of reconciliatory figure, Neriah said he was skeptical, given Libya's lack of democratic traditions. "I don't believe at all that democracy is something [inherent] in the Middle East, and in Arab countries, especially in countries that are very much ruled by Sharia and Islamic laws."

Down for the Count: Libyan Terrorist Group Officially Ceases to Exist